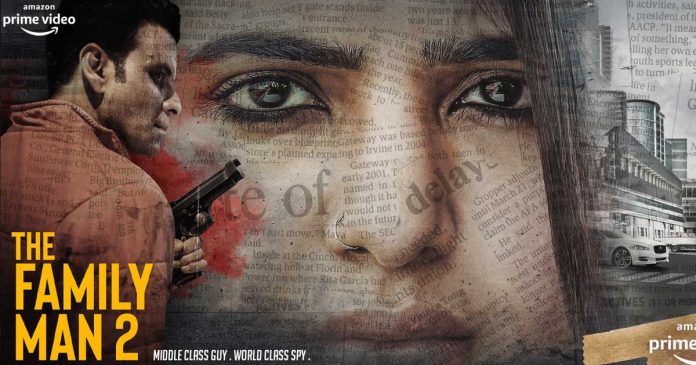 After the trailer of season 2 released, netizens and NTK leader, Seeman had lambasted actor Samantha for playing an alleged Tamil terrorist from Sri Lanka and called for a ban

Rajya Sabha member and MDMK leader Vaiko has urged Information and Broadcasting Minister Prakash Javadekar, in a letter, to stop the Family Man season 2 from being streamed on Amazon Prime, alleging it shows Tamilians in negative light.

Moreover, Vaiko said in his letter dated May 23 that if they fail to take action the government will have to face the “serious consequences”. This letter comes after Naam Tamilar Katchi chief, Seeman had raised objections to the serial’s trailer when it dropped online on May 19.

Seeman had also warned of dire consequences if the show was not cancelled since it was trying to misrepresent Tamils. John Abraham’s Madras Cafe was also banned and not allowed in theatres because of their anti-Tamil content, he had pointed out. After the trailer released, netizens too started criticising Samantha for allegedly playing a Tamil terrorist from Sri Lanka under the hashtag #FamilyMan2_against_Tamils, which even went viral for a while.

Season 2 of The Family Man series is scheduled to land on Amazon Prime Video on June 4.

In the trailer of the season 2 of the well-loved spy series shows the protagonist, Srikant Tiwari (played by the versatile actor, Manoj Bajpayee) landing in “hot, happening” Chennai to take on a woman killer (Telugu star, Samantha makes her debut in this show) togged up in what resembles an LTTE uniform. She plays Raji, who is ostensibly on a destructive mission to kill.

There’s also a reference made by Tiwari’s intel agency chief in the trailer that the rebels were tying up with Pakistani’s ISI, which seems to have angered politicians such as Seeman and Vaiko.

In his letter dated May 23, Vaiko wrote to Javadekar that he objected to Tamils being shown as terrorists and as ISI agents and having links with Pakistan. Further, he wrote that the sacrifices made by the Eelam warriors were also wrongly shown as a “terrorist act”. 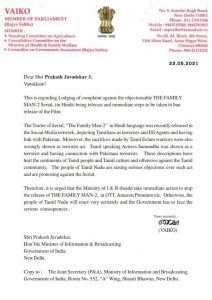 “These descriptions have hurt the sentiments of Tamil people and Tamil culture and are offensive against the Tamil community,” Vaiko stated.  According to Seeman, Chennai was picked as the location of the series and it was no coincidence that a Sri Lankan Tamil woman, the pivot of the story, has been portrayed as a militant.

In the 2009 civil war in the island nation, Seeman alleged that two lakh Tamil people were slaughtered and an attempt to portray the Tamils as terrorists was highly condemnable. And, he warned that it was completely unacceptable to them if this web series was released.

The Family Man 2 has been eagerly awaited after a cliff-hanger of an ending in the first season. The series gained a lot of attention and fans because of its fast-paced narrative, good storyline, sharp editing and for the actors. Amazon Prime has been actively promoting the second season of the series in a big way since it is one of their big winners. Now, the season’s fate however hangs on a fine balance.