Hindi web series ‘Grahan’, which landed on Disney+Hotstar last week, is a love story woven around the anti-Sikh riots, which broke out in the steel town of Bokaro in Jharkhand (then Bihar) after Mrs Indira Gandhi’s assassination. It is based on a book ‘Chaurasi’ (eighty-four), penned by a Bokaro-based Hindi novelist, Satya Vyas, who sold the rights of his book to the makers of the series at the MAMI Mumbai Film Festival’s Word to Screen market, in 2019.

Interestingly, many Hindi novels set in small-town India were picked up like hotcakes at the festival showing Bollywood’s penchant for such themes. The young author, Satya Vyas, seems happy with the way ‘Grahan’ has turned out, and by the fact that it is by and large being received well by the audiences. Though, Vyas admits he had a few reservations about the dramatic ending, he shrugs that off as necessary elements in an OTT series.

Moreover, the film-makers had to forcibly add more sub-plots to his story to stretch it to an eight-episode series from his 192-pager novel – a tale about two lovers, whose lives go awry during the riots.

The premise of ‘Grahan’ is sincere, it wants to show how riots are instigated by politicians to serve their own ends (isn’t it why it mostly happens?) and how this cruelly changes the lives of innocent people forever. But, the problem with the series, which centres around a young IPS officer, Amrita Singh (the talented Zoya Hussain, Mukkabaaz fame) from Ranchi, who has been assigned to head a special task force to nail the culprits behind the 1984 riots in Bokaro (in reality, Bokaro was the worst hit at that time after Delhi and Kanpur), is that the plot meanders and some of the scenes dealing with Singh’s police work are frankly patchy and completely unrealistic. 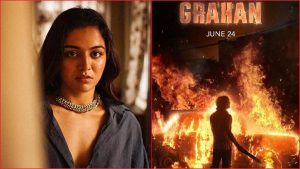 There are scenes, where a journalist working to uncover the truth in a report on the 1984 riots gets burnt in front of her eyes, a culprit she arrests gets arbitrarily shot as she hauls him to her jeep from nowhere, another culprit in her custody too gets killed and she seems clueless. As eyewitnesses get so easily bumped off the frames, you feel as helpless as Singh.

Meanwhile, as Singh embarks on her investigations, she realises that her genial, loving father, Gurusevak Singh (played by actor Pawan Malhotra who works hard to give his best in a runaway plot) is one of the prime suspects in the case. Her father clams up as she confronts him and she has to do her own sleuthing if she wants to arrive at the truth (and we need to wade through eight episodes for that).

As she visits Bokaro and meets victims and culprits, it becomes clear that her father was probably one of the key rioters who unleashed havoc in the small town looting and slaughtering Sikhs. Even as she keeps this revelation to herself, the investigation is fast turning personal for her, as she stumbles across her mother, who she thought was dead!

There’s a parallel track being played out alongside in a different time-zone in 1984. That is the courtship between a factory worker Rishi Ranjan (played by Anshuman Pushkar, who strongly resembles Sonu Sood and is as earnest), and Manu (played by Wamiqa Gabbi), which carries some old-world charm and keeps the series rooted.

There is a link between these two stories from different timelines and the final denouement unfolds in court, Bollywood style. And, you wish Amrita could have found out a mind-altering truth about her father and her in a more private space rather than in a crowded judicial court.

But in this mayhem, which is the ‘Grahan’ plot, stories of the helpless plight of Sikhs in 1984 filter through. There’s one horrific tale that Amrita and her colleague stumble across in Bokaro (which according to Vyas is what really happened). It is the tragic tale of two Sikh kids, hiding under a bed witness their parents being brutally beaten and then burnt to death. The story is narrated by the sister who lives in a shelter even today, while her brother, permanently damaged by the incident got addicted to drugs and finally committed suicide.

Vyas came across this story during his research, which he did extensively before writing ‘Chaurasi’. He read essays and short fiction in the book, ‘1984 In Memory and Imagination’, and also ‘The Anti-Sikh Violence and After’ by Sanjay Suri, and ‘When a Tree Shook Delhi’ by Manoj Mitta and HS Phoolka. Vyas, in fact, found it tough get people in Bokaro to talk about the riots because no one including the victims wanted to dredge up the past and remember the ugliness.

“They wanted to forget because people who took part in the frenzy and madness that broke out at that time did not want to face up to their sins. It is a sensitive issue even now in Bokaro, but I salute the community for setting aside the bad memories and building their lives once again and coming back stronger,” says Vyas.

Only wish ‘Grahan’ had stuck to just the book and made a film instead of a series then it may have been more effective and misused talents like Pawan Malhotra and Zoya Hussain. 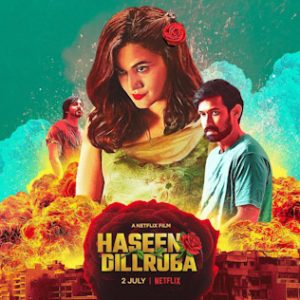 Murder in a small town

Bollywood’s obsession with stories set in small towns continues in ‘Haseen Dillruba’ (Beautiful Beloved), which released on Netflix this weekend. Set in Jwalapur, Haridwar, it is directed by Vinil Mathew (‘Hasee do Phasee’ fame), an ad film director, who has worked with the likes of directors like Santosh Sivan and Bharath Bala. It has the right salacious ingredients: a murder in a small town, a love story, a sexy woman and betrayal. And, the sprightly Taapsee Pannu and Vikrant Massey (‘Mirzapur’) in the lead roles.

But ‘Haseen Dillruba’ looks all good from the outside but has no soul and in the end leaves you with a bitter taste in your mouth. To start off, it has a wafer-thin plot of a ‘hot bod’ from Delhi like Rani (Taapsee Pannu), who agrees to an arranged marriage with an engineer, a simpleton, Rishabh Saxena (Vikrant Massey) from the back of beyond, Jwalapur.

Rishabh is a mousey character, who is good at fixing electrical gadgets and knows all about homoeopathic medicines. But, he’s a little too eager and weak when it comes to sex, leaving his sexy wife pining.

Well, this is a perfect setting for extra-marital sex (a la ‘Manmarziyan’ style, in which Taapsee Paanu had a better-defined role) with Rishab’s cousin, Neel (Harshvardhan Rane). We know nothing good is going to come out of this and Rani will quickly realise her husband is the real thing. Incidentally, this entire story is played out as her narration to an inspector (Aditya Srivastava), who’s convinced she’s murdered her husband. (yes, Rishab ostensibly dies in a gas blast not before being hit on the head)

The story turns a bit macabre on the lines of a book by a pulp crime novelist, which you pick up railway stations, like the one quoted often in the movie – Dinesh Pandit – whose books are teeming with stories of how to murder people in small towns and get away with it. The cop in fact at one point asks his juniors to haul Pandit to the police station for questioning. The audience feels the same.

A movie that left you cold

There was a lot of hype around the Prithviraj starrer, ‘Cold Case’, but the film too serves up insipid fare. The discovery of a skull and a murder investigation which veers into the zone of a revengeful spirit hiding in a rickety fridge, are all too much to absorb and bear. What makes the film worse, besides some creepy sound designs, which do not make you turn a hair, was Prithviraj’s stone-faced acting. He seemed indifferent to the goings-on, mechanically moving from one scene to the other, while Tamil actor Aditi Balan, who showed her mettle in her debut film, ‘Aruvi’, seemed dull and clueless.

Ashiq Abu’s short film ‘Rani’ is actually part of a Malayalam anthology, ‘Aanum Pennum’ (man and woman), which premiered earlier this week on Amazon Prime. The film revolves around the story of a college boy who persuades his girlfriend to go with him for a ride to an isolated place.

Reluctantly at first, she agrees and they come across an unexpected situation. The film not just explores how differently men and women react to traumatic circumstances but it also delves into how both sexes are wired differently when it comes to sex.

The anthology also has Jay K’s Savithri (with Joju George playing a lecherous landlord and Samyuktha Menon as a communist comrade on the run from the police) and Venu’s adaption of Uroob’s 1969 short story ‘Rachiyamma’ with Parvathy Thirovothu in the lead. It is considered to be one of the most powerful and complex female characters ever created in Malayalam literature.

New releases: This is yet another Malayalam film. Sara’s which lands on July 5 on Amazon Prime is an unconventional romantic comedy starring popular actors Anna Ben and Sunny Wayne. Directed by Jude Anthany Joseph, Sara’s is a story of a young and aspiring filmmaker who is struggling to do her first project in the world of cinema.