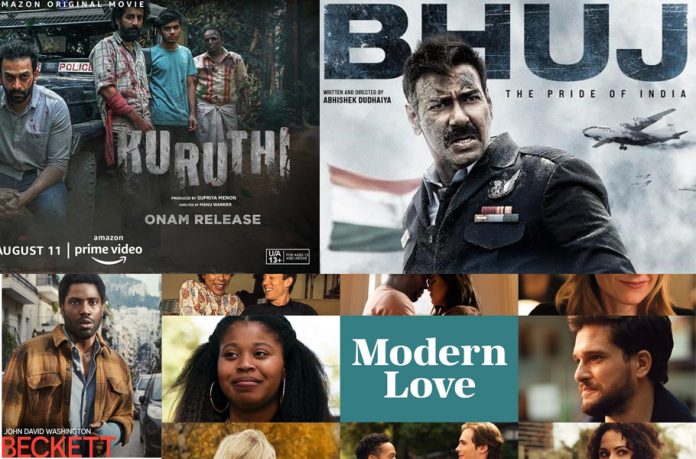 Patriotic movies, a Malayalam home invasion thriller and the second season of a popular anthology on modern love are on this weekend on OTT platforms

Bollywood loves making biopics on India’s bravehearts and two of these films premiere on OTT platforms this Independence day weekend. One is Bhuj: the Pride of India, a film based on IAF squadron leader Vijay Karnik’s audacious attempt to get an air-strip built with the help of local women during the 1971 Indo-Pak war and Shershaah, which captures on celluloid the exploits of a brave soldier in the Kargil war in 1999.

Bhuj: The Pride of India, which will start streaming on Disney+Hotstar on August 13, is centred around IAF Squadron Leader and then Bhuj airport in-charge Vijay Karnik’s bold move to mobilise 300 women from a local village in Madhapar to reconstruct an entire IAF airbase which had been destroyed by Pakistani jets.

The film is based on a real-life incident which transpired in the 1971 war. On December 8, 1971, 14 Napalm bombs were dropped on the Indian Airforce strip in Bhuj, making it unusable for the IAF planes. The IAF sought the help of BSF jawans to repair the strip but they had no labour to spare.

That’s when Karnik took the unconventional decision to involve citizens in a war. He roped in 300 people, mainly women, from Madhapur village in Bhuj to work night and day to reconstruct the airstrip. The job was completed in four days and the airstrip was functional again.

In an interview to Hindustan Times, the retired Wing Commander, Karnik had said, “We were fighting a war and if there had been any casualties of any of these women, it would have been a great loss. But I took the decision and it worked out.” He had even briefed them where they should take shelter in case of an attack and they had faithfully and bravely followed his instructions.

Ajay Devgn, who plays Karnik in the film, said the main purpose of making such films was to spread awareness of such bravery among the citizens of the country. “It is very inspiring to hear such stories, which is one of the primary reasons why I wanted to be a part of the movie,” said Devgn, in a video interaction between retired Wing Commander Vijay Karnik and him, which he had released on his social media handle.

He also said that he had derived a lot of strength and dignity from wearing the armed forces uniform. “As soon as one wears it, both the thought process and the body posture automatically undergoes a change. You feel a sense of power within you,” he said. Bhuj… also stars Sonakshi Sinha, who essays the role of Sunderben Jetha – a social worker – who risks her life to help the armed forces at this critical time.

The other patriotic film, which landed on Amazon Prime on August 12, is Siddharth Malhotra’s Shershaah. This film is based on the true story of the Param Vir Chakra awardee, Kargil War hero – Captain Vikram Batra, who had lost his life whilst saving a fellow soldier during the Kargil War at just 24.

Lead actor Sidharth Malhotra who was just 14 years old when the Kargil War took place, was motivated by the story of Captain Vikram’s sacrifice after a meeting with the matryr’s twin brother, Vishal Batra. He took the film project to Karan Johar’s Dharma Productions and ensured that the Kargil War hero’s story was made to be told across the world.

Also read: Navarasa: Not all stories sizzle; some excel, others short on substance

A Malayalam thriller that is picking up good reviews is Prithviraj’s Kuruthi which landed on Amazon Prime this week. Touted to be “a taut socio-political thriller”, it explores the beliefs people have which triggers communal violence. It pits two families against each other over the life of a young Hindu boy. It raises pertinent questions, without picking sides, about religious faith and hatred, said one review.

Though it taps into the violence and fear spread by communal violence, it’s also meant to be a riveting thriller on home invasion. When a young Hindu boy is taken into police custody over the accidental death of a Muslim man during a communal clash, he becomes the target for men thirsty for revenge. But the boy is handed over to a Muslim family and they’re made to swear to protect him. How far will they go to keep their promise?

That is the premise of the film. Ibrahim (Roshan Mathew) lives an ordinary life in Erattupetta, Kerala grieving the death of his wife Zeenath and daughter Zuhru in a landslide in the village. He lives with his father Moosa Khader (Mamukkoya) and brother Resul (Naslen of Thanneer Mathan Dinangal fame).

On a fateful night, an injured cop, SI Sathyan (Murali Gopy), barges into Ibrahim’s house with a prisoner, Vishnu (Sagar Surya) and their lives are turned upside down. Prithviraj Sukumaran, Shine Tom Chacko, Srindaa also find themselves in Ibrahim’s house locked up for a night that is rapidly turning horrific. Check it out.

A tourist in trouble – Beckett

Here’s a Hollywood thriller of another kind. While vacationing in Greece with his girlfriend (Alicia Vikander), American tourist Beckett (John David Washington) becomes the target of a manhunt after a devastating accident. He’s forced to run for his life and desperately needs to get across the country to the American embassy to clear his name. Tensions escalate as the authorities close in, political unrest mounts, and Beckett falls even deeper into a dangerous web of conspiracy.

This English film, Beckett, which lands on Netflix on August 13, however has not received good reviews in the international press. Hollywood Reporter wrote: “Considering the amount of ground covered in the plot, this is a curiously undynamic film that struggles to inject urgency into the protagonist’s life-or-death situation.”

But for movie-watchers who love bingeing on romantic fare, there’s the second season of Modern Love, which lands on Amazon Prime. Based on a New York Times column and podcast, featuring standalone stories of everyday romance, the first season of the series had debuted in October 2019. Season 2 will star an all-new cast like Tom Burke, Zoe Chao, Minnie Driver, Grace Edwards and above all Kit Harington, who is popularly known for his role as Jon Snow in the epic television series Game of Thrones.

If you are a fan of the Israeli top-notch series, Fauda, Israeli actor Lior Raz is back with a fast-paced thriller, Hit and Run. Here, Raz plays Segev Azulai, an unassuming Tel Aviv tour guide married to American dancer Danielle (Kaelen Ohm). Danielle is about to depart for a big audition in New York City when she is killed by a hit-and-run driver.

It’s a traffic accident that the grief-stricken Segev is left trying to make sense of, but what if it wasn’t an accident? And what if Segev isn’t just an unassuming Tel Aviv tour guide? What if he has a particular set of skills that he’s about to employ in New York City, where he travels in search of the truth, with the help of strung-out buddy Ron (Gal Toren) and old flame Naomi (Sanaa Lathan), now a journalist? Sounds gripping enough for a lazy weekend.