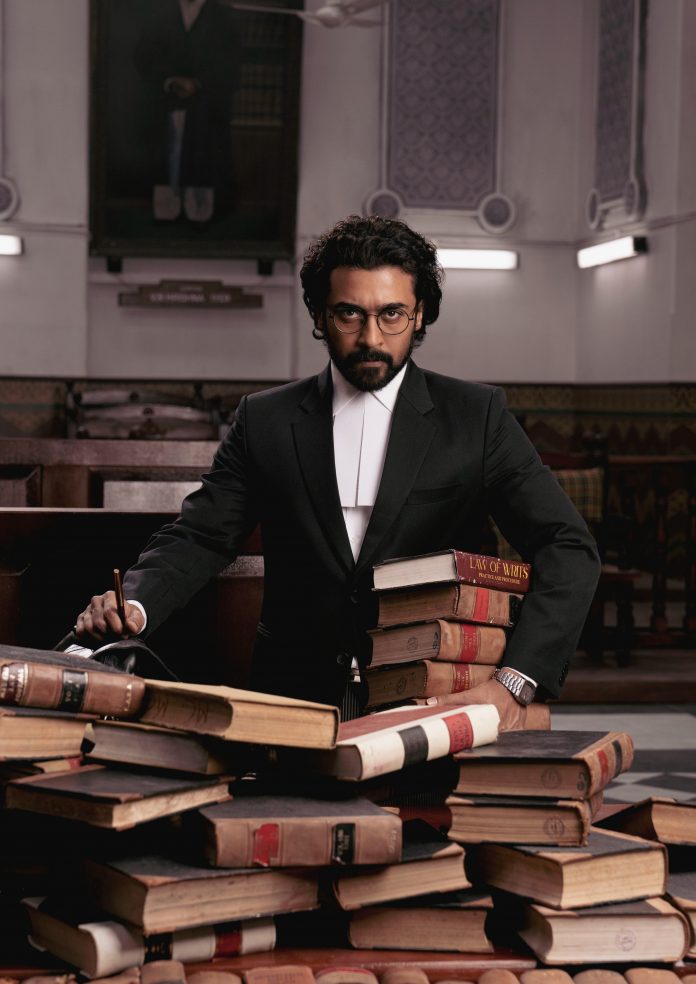 Surya plays the former high court judge, K Chandru, who moves mountains to get justice for the tribal woman Sengini who knocks at his door for justice

It has been exactly a year since the Sathankulam custodial deaths happened. The perpetrators are yet to be punished. The incident shook up our collective conscience. Though investigations are allegedly going on, it is uncertain when the family of Jeyaraj and Bennicks will get justice.

While the incident will be etched in our memory for years to come, the Tamil film ‘Jai Bhim’ which was released on Amazon Prime on November 2, has thrown the spotlight on a similar incident that happened in 1993.

Based on the brutal lock-up death case of a tribal, the film does not flinch to lay down the bare facts as it happened many years ago. It tells the tale of how an innocent snake catcher, Rajakannu (admirably played by Manikandan) from the Irula tribe gets falsely implicated in a theft case and is hauled off to jail. After which, he goes missing – the police claim he has run off with the jewels and his distraught pregnant wife approaches a lawyer Chandru ( Surya in top form sans melodrama), to find out what happens. Surya is portraying none other than the former Madras High Court judge K Chandru, who had taken up this case and fought it to the bitter end.

The other elements such as the court scenes which closely resemble real-life courts, the screenplay that acknowledges the contribution of CPM cadres, music and cinematography add weight to the film. It has clearly turned out to be one of the highly-acclaimed Tamil films of this year.

This story revolves around four Andai Kurumbar families, one of the caste groups under Scheduled Tribes living in Mudhanai village, Cuddalore district for over 20 years. Their major occupation was making baskets using bamboos and they also work as agricultural labourers. One day, about 40 sovereign of jewels are stolen in a house that had employed the Kurumbars. The house owner suspect Rajakannu of having stolen the jewels and based on the complaint, the Kammapuram station police take Rajakannu into custody.

He undergoes various third-degree police torture and dies in custody. To cover up the murder, the police cart his body in the dead of night to throw it by the wayside in neighbouring Trichy district and they claim that Rajakannu escaped from custody.

Rajakannu’s wife Parvathi tries to get help from various sources and she approaches Communist leaders in the region as well. But they draw a blank and are unable to find Rajakannu. The police do not respond properly to their pleas. Finally, they seek the help of justice Chandru, who was then a practising lawyer at Madras High Court.

Chandru filed a habeas corpus petition and it was the only habeas corpus that was heard for a long time in the history of the Madras High Court. In the interim order given in 1996, the Court while providing compensation to Parvathi, also ordered for a CBCID inquiry. After a 13 year legal battle, it was proved that this was a case of custodial death and the perpetrators, the police officials, were sentenced to 14 years rigourous imprisonment in 2006.

The screenplay built on this case makes the timeline of the case very clear. In 1995, the AIADMK was in power. The film does not baulk at showing the brutal bloody torture the police inflict on people to force them to confess to a crime they did not commit.

Is there any appropriation?

The film’s title ‘Jai Bhim’ is also a subject of discussion. The slogan is more popular among the Ambedkarites and Dalit circles, whereas the film shows the contribution of Communists.

Also read: ‘Jai Bhim’ and the cinema of emotional blackmail

It is interesting to note that in Tamil Nadu, there is a constant clash between Dalit activists and Communist cadres. While many Dalit movements alleged that Left parties are not involved in caste-related issues, the Communists on the other hand, often harp on the fact that in order to eradicate caste and stop caste atrocities, Dalits should fight it as a class struggle.

It is true Dalit movements focus largely on Scheduled Castes and they tend to leave out Scheduled Tribes. So, is it justified to use the title ‘Jai Bhim’? It seems more like they are trying to steal the thunder from the Communists in the name of Ambedkar, who has become an icon of the Dalits.

However, Era Murugavel, an advocate and human rights activist believed that there is no enmity between the two. The perception of differences on caste issues between Dalit activists and the Communists have been built up by ‘intellectuals’ and NGOs funded by corporates.

“There is no such rupture between the two on the ground. The Communists have revolted against caste atrocities in districts like Thanjavur as early as the 1970s when the Dalit movements were nowhere on the scene. Also, they accept Ambedkar and the Dalits too started acknowledging the contributions of Communists,” he pointed out.

In order to avoid such controversies, the director of the film TJ Gnanavel, has explained the meaning of ‘Jai Bhim’ as a Tamil translation of a Marathi poem. One of the lines goes like this: “Jai Bhim means a teardrop of thousands of people”. To add that, even Chandru himself has titled one of his books as ‘Ambedkar Oliyil Enadhu Theerppugal’ (My judgements in the light of Ambedkar). He also said that it is Ambedkar’s speeches and writings that helped him to understand the nature of a case while pronouncing judgements.

Why STs left out?

So, what is the reason behind the lack of strong leadership among Scheduled Tribes?

“Their numbers are small and they scattered all over. Most of them are uneducated and many don’t even have community certificates. To bring them under one umbrella is difficult,” said Govindhan, a Communist leader in Cuddalore, who was instrumental in taking up Rajakannu’s case. He also made a vow that until they get justice in this case, he won’t get married. When he took up the case he was 26 and he finally married at the age of 39, after the policemen were punished.

Though there are no separate political parties to take up the cause of STs, it is the Left parties that often lend their support. Cases such as the police atrocities on Vachathi, a tribal village in Dharmapuri district during the search for Veerappan in the early 90s, are some examples, Govindhan added.

Arguably, the film is the second most depressing film made in Tamil cinema after Kamal Hassan’s ‘Mahandhi’. But where Surya scores over Kamal is that this film also gives hope as the woman gets justice through the courts.

When asked about whether Govindhan had hope in our courts while taking up this case, he succinctly replied: “More than hope, we had the commitment”.