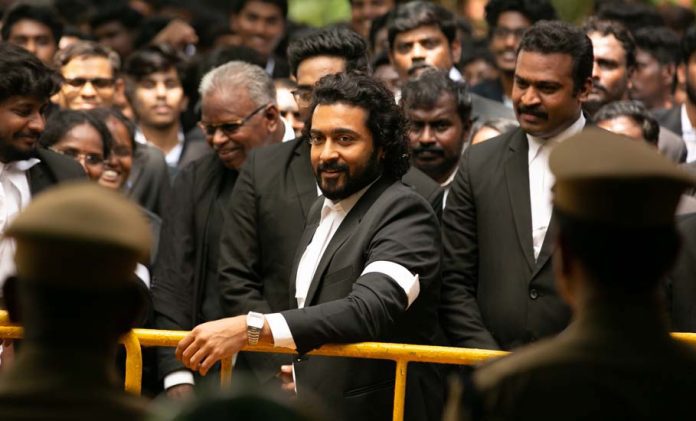 It is the guilt of the privileged classes that Surya and Gyanavel, in their turn, exploit; that dark and inexorable need of these times when nobody is ‘seen’ as nothing if he or she is not a victim

The week’s flavour is ‘Jai Bhim’, produced and starred by Surya, directed by T J Gnanavel, and released on Amazon Prime. Most of those who watched, the naturally guilty upper caste, know the story well by now. The incident happened in the mid-90s.

In a village in Virudhachalam, in Tamil Nadu, a tribe, Irulas, are the historical fall guys for the law. If there is a case that is hard to bust, the cops, all of whom we must assume are from a slightly superior caste (if only because they are not Irulas), hang it on the first Rajakannu (the male tribal victim in the movie, who is charged with theft) they set their eyes on, and torture him into admission, so ‘truth’ is brought to light.

In ‘Jai Bhim’, the Rajakannu in question dies of custodial torture. His wife, Sengeni, already a mother of a child, and pregnant with her second child, fights the case with the help of an activist lawyer, Chandru, based on a real-life hero K Chandru, who in the late 80s and 90s saved the honour and lives of thousands of tribal men and women vulnerable to exploitation by the law.

The movie has been universally liked. Except for hoarse cries issued from critics like Baradwaj Rangan (who ‘appears’ upper caste), there has been no real discussion on the movie except the repetition that it is ‘strong,’ ‘visceral’, ‘powerfully performed’, ‘true’, and a ‘great document of historical repression of the underprivileged.’

All true. I watched the movie and teared up when Sengeni, hands folded, pleads with Chandru to ‘save’ her. Lijomol Jose who essays the character very well must have been traumatised by the experience because in one interview, she said, the ‘tears were real.’ I do not doubt it.

Yet, why do I feel a little cheated at the end of the movie? Is it because except Surya (a  superstar in south, and so there is just that much you can do to make him ‘look’ underprivileged), everyone else’s face had been visibly blackened with grease and makeup that the message is rammed home beyond doubt: black lives matter. White lives not so much because they are naturally guilty as their complexion is lighter.

If you read the social media comments on the movie, especially from urbanised Kerala, where everybody would rather be ‘seen’ dead than be ‘seen’ as a reactionary, and the urban elite of India in general, ‘Jai Bhim’ is almost the result of their collective will to be ‘seen’ to be the members of the Universal Justice Party.

Yet, arranged dowry marriages are the norm in Kerala. It is also one of the most consumerist of Indian states. Elsewhere, the urban elite that applauds the movie almost compulsively is generally guilty of benefiting from the highly exploitative patriarchal system that helps them with a car, or a home, or other privileges including the English language—in which they articulate their revolutionary sentiments and externalise their guilt.

‘Jai Bhim’ ironically addresses the class that is guilty of exploitation of the underprivileged, and the praises they shower on the movie is an expression of their latent guilt. To repeat: they want to be ‘seen’ to be on the right side of history. Throughout this piece, I emphasise words like ‘appear’, ‘look,’ ‘seen’, because as a society we are in a phase of representation; representation of ourselves to each other and to ourselves as good people.

This need to ‘appear’ correct, or ‘look’ right in deeds, by praising a strong theme and the movie itself, by overpraising these, is a way of distancing oneself from the privileged class’ role in actually perpetrating acts of injustice. In their present and real lives too, they continue to do it in their daily interactions— intolerant, hateful, almost mob-like, no matter what the ideology they think they represent— even though they use the social media space as their constant confession rooms. It surprises me often why if just about everyone is so committed a spokesperson for justice and fairness, why India remains such a dangerous place, how the powers that be are so firmly ensconced in their positions.

Also read: Surya was told no fight, no love: Justice Chandru on making of ‘Jai Bhim’

It is the guilt of the privileged classes that Surya and Gnanavel, in their turn, exploit; that dark and inexorable need of these times when nobody is ‘seen’ as nothing if he or she is not a victim. The entire treatment of the movie is a representation in black and white. There are just no nuances. The law is a bitch. The cops are bastards. Chandru is an angel. He was born that way. There is no explanation why he is born that way. Sengeni and Rajakannu are just very black-skinned and good. Because they are poor and dark, they would not kill baby rats and adult snakes which they catch to save the grains and lives of the rich landlords.

Indeed, in the first 20 or 25 minutes of the movie, by way of setting up the idyllic but romantic lives of the Irulas, there are songs and a kind of social bonding associated (‘seen’?) with the poor and the deprived, the kind of bonding the privileged are clearly incapable of. It is all a kind of given.

The director is unapologetic about the side he takes in the Manichean neo-colonial Indian reality. Is that wrong? No. How can it be wrong? We are an unjust society. No question. How can anyone deny that? Yet. Yet that is why this should have been a gripping documentary and not a movie. Because good cinema is all about nuances. There is just none in this movie.

The police inspector who tortures Rajakannu to death comes across a Tamil reincarnation of Joseph Stalin’s henchman Beria. Once or twice he says on the witness stand that the pressure from above made him do it. Perhaps. Perhaps it was his conditioning, too? Perhaps, he really thought the Irulas are naturally given to theft and violence. None of it comes through, though. What’s this sadist? Is he married? Is he a different man at home? Is he under financial pressure? Has he been denied promotion? Indeed, what caste is he? The protagonist, Chandru, as Baradwaj Rangan says, has no backstory as well. The lack of nuances is the strength of this movie.

No backstories. That means the characters are not three-dimensional. They have considerable length and breadth. But no depth. ‘Jai Bhim’ as a movie is guilt-porn. This is not to say it is not a powerful drama. But Gnanvel has so contrived his product that it comes across as sustained emotional blackmail as well. There can be only tears shed. Praise showered. System faulted. No criticism of the movie as a movie. That would be taking sides with the exploiters.