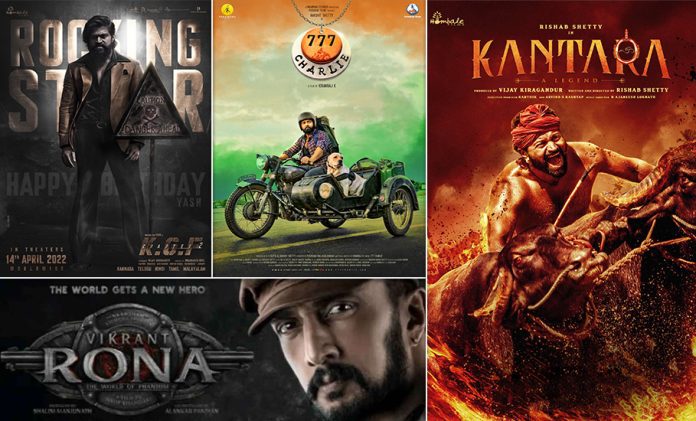 The top five grossers in Kannada have raked in more than ₹1,800 crores in 2022. A big chunk of that amount, which was close to ₹1,200 crores was earned by Hombale films alone from KGF Chapter 2.

Actors like Deepika Padukone, who had made it big in Bollywood after making her debut in films with a Kannada movie, did not even refer to first film Aishwarya for a long time.

However, in 2022, the tide turned in favour of the Kannada film industry. It has been a game-changing year for the industry as they shook the nation with a stream of successful films.

Thanks to Telugu filmmaker SS Rajamouli, south Indian cinema became a household name in the Hindi belt when his magnum opus Baahubali: The Beginning and Baahubali: The Conclusion became superhits. Rajamouli showed the way but credit must be given to Rocking Star Yash for dreaming to take Kannada film industry to a pan-India level.

KGF Chapter 1 made inroads in the Hindi belt in 2018 but the real icing on the cake was the sequel (KGF Chapter 2), which hit the screens in 2022.

Also read: Why Kannada social media is baying for a ban on Rashmika Mandanna films

The Kannada film industry was known to produce the maximum number of films in the Indian film industry, but this year Sandalwood earned the tag of having raked in the highest amount of money as well among film industries across the country. As per reports, the top five grossers in Kannada have raked in more than ₹1,800 crores in 2022. A big chunk of that amount, which was close to ₹1,200 crores was earned by Hombale films alone from KGF Chapter 2.

Films like Charlie 777 and Vikrant Rona also created a buzz in the Hindi market. Interestingly, a small-budget film like Kantara dug deeper into the Hindi belt and raked in over ₹400 crore gross.

Ba Ma Harish, the president of the Karnataka Film Chamber of Commerce says that a lot of new developments transpired in 2022. “KGF became a brand, Vikrant Rona had Sudeep, but the success of Kantara across the nation and even abroad has brought the industry a lot of fame. A small-budget movie garnering so much attention is wonderful. This will not just help Kannada industry but other industries as well,” says Harish.

Earlier, Kannada filmmakers used to draw inspiration from Malayalam films viewing them as content-based movies but today, other industries are watching Kannada films on various OTTs and theatres to source good content for their films.

There is no doubt that KGF Chapter 1 had a brand value and the sequel capitalised on it. Rocking Star Yash travelled the length and breadth of the country to promote the film. Yash and Hombale films were accused of promoting the film more outside of Karnataka instead of their home turf. The content worked and national media couldn’t get enough of the Rocking Star.

Kantara is a story of an underdog who manages to win the big race. It didn’t create much buzz in Karnataka and also had few theatres compared to Mani Ratnam’s magnum opus Ponniyan Selvan 1, which also released on the same day. Even though Kantara was produced by Hombale films that also made KGF, they did not splurge on marketing the film within Karnataka itself.

Also read: ‘Kantara’ to stream on Amazon Prime from November 24

As luck would have it, the film got a terrific response from the audience and the makers were forced to hurriedly dub their film in other south Indian and Hindi languages within two weeks. Videos of Indian audiences standing in serpentine queues to get tickets for Kantara in foreign countries went viral. The national media’s attention was once again on Sandalwood and almost every national channel invited Rishab Shetty for interviews and conclaves.

Director R Chandru, who is producing and directing Kabzaa, the next pan-India film from Kannada starring Real Star Upendra, Kichcha Sudeep and Shriya Saran claims that the success Kannada film industry is enjoying is not because of one person.

“It has to be a collective effort. We were motivated by KGF, Charlie 777 and Vikrant Rona’s box office numbers and decided to go pan-India. The response to our Hindi teaser which released on December 1st has been terrific. Upendra is doing another pan-India film titled UI. There’s Dhruva Sarja’s Martin and KD which will be released across the nation in the coming months. One person’s success motivates others and this is how the Industry grows together,” says Chandru.

The success of films like KGF Chapter 2, Charlie 777, Vikrant Rona and Kantara has certainly made insiders feel that the golden era of Sandalwood is back. The Kannada film industry had ruled the roost in the ’60s, ’70s and ’80s but had somewhere lost momentum. A few actors, mostly heroines ventured into other industries and saw success, but the Kannada film industry was neglected, mocked, and was hardly known.

It was not just the outsiders, but insiders in the Kannada film industry too felt they had a small market and drew boundaries. Even though superstars like Sudeep and Darshan used to specifically make films to woo certain regions like the coastal belt or the ‘A’ class territories in the state, there have been several instances when Kannada filmmakers openly said they were not getting theatres in the state as non-Kannada films were dominating the screens.

It won’t be an exaggeration to say that even the Kannada audience also had enough of remakes and scenes that were lifted from several hit non-Kannada films. Even though KGF Chapter 1 had made a mark in the Hindi belt, several actors in Kannada, including senior actors, thought that it could be a one-off incident.

The success of Kannada films

The success of Kannada films in 2022 has given a much-needed boost to filmmakers in Sandalwood. Producers from the neighbouring states have started to invest in Kannada films and actors; filmmakers have begun exploring different genres and actors are hiring PR machinery that will help them reach audiences across the country.

Film industries across the country were badly hit when the pandemic struck and some producers in Kannada delayed their production until they were convinced that audiences would return to the theatres. Non-Kannada films were welcomed with open arms by exhibitors in 2021, as Kannada filmmakers wanted to see if the audience would dare to step into theatres.

Several big filmmakers barring a couple in Sandalwood planned their releases in advance as they did not want to fight among themselves to draw audiences into theatres last year. The Kannada film industry had a great run in 2022 and the production house Hombale films struck gold with not just one but two films in the same year.