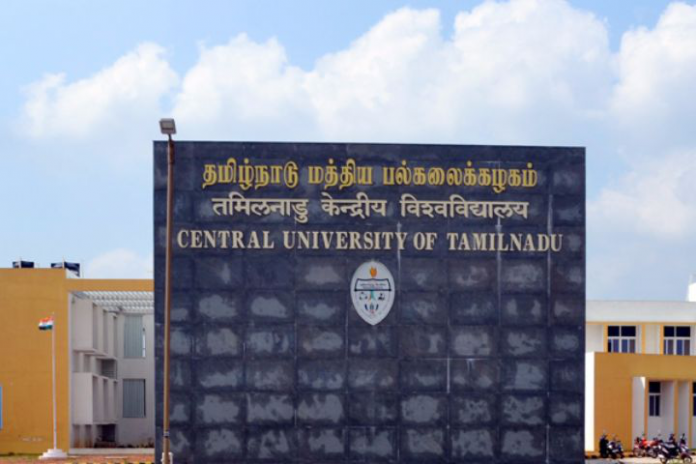 In Tamil Nadu, students aspiring to apply to the Central University of Tamil Nadu and the Indian Maritime University, may have to sit for CUCET this year

The Tamil Nadu government has constantly locked horns with the Centre over the national medical entrance exam NEET, which they feel puts marginalised and rural students at a distinct disadvantage. But, now they may have to contend with yet another centrally conducted common entrance test for admissions to undergraduate courses in 45 Central Universities in different States in the country.

Last year, the Union Education Ministry had constituted a committee to look into modalities for the Central Universities Common Entrance Test (CUCET) for admissions to all undergraduate courses at Central universities as suggested by the National Education Policy (NEP) 2020, reported the Hindustan Times. The committee has submitted its report to the education Ministry, which is currently examining it.

Meanwhile, in March 2021, the vice-chancellors and controllers of examination of the Central universities were invited to a consultation on the issue. About 45 Central Universities consented to the exam and were told by the NEA that they would be holding the CUCET this year for all aspiring students. But, the decision has not been finalised if the CUCET will be held this year, said a report in The Hindu.

The report added that the older and more prestigious institutions such as the JNU, Delhi University (DU), Jadavpur and Shantiniketan were not keen on CUCET since they had their own admission tests. However, the same report went on to quote the DU vice-chancellor PC Joshi who had said earlier this month that if the education ministry approves the use of the CUCET, it would be implemented for admissions.

The DU, which has stressed that it will not compromise on merit however, has been considering both the Class 12 marks and the CUCET scores for admitting students. JNU has also agreed to consider the CUCET for its undergraduate admissions if the government directs it to do so.

There is no clarity on the issue as yet since the education ministry has not communicated any final decision on holding the CUCET this year. Meanwhile, teachers and aspirants have raised their concerns over this test format, which in its earlier avatar (CUCET has been in existence since 2010 starting off as a common entrance test for seven Central Universities) involves multiple choice questions papers covering language, general awareness, mathematical aptitude and analytical skills, as well as domain knowledge in the candidates’ chosen subjects.

Testing students on their knowledge of their chosen subjects in university is what concerns some students in Delhi. A group of Class 12 students from across the country wrote to DU’s acting vice-chancellor PC Joshi pointing out that the CUCET exams proposed format contains a subject-specific exam, while DU offers courses which are open for students from other streams. Earlier, there had been scope for students to switch streams in DU after the 12th.

“There were no restrictions in choosing the subjects for graduation. But if one aspires to pursue a subject which s/he didn’t learn in class 11 and 12, then such group of students will face problems in competing in the entrance exams where there is a subject-specific test,” the students wrote in the letter, Hindustan Times reported.

The report also quoted a Class 12 student from a Bengaluru private school. She said that they have issues with CUCET since it is a great alternative for merit-based admissions. But it should have been announced earlier. If the exams are likely to be held in August, then the students do not have time to prepare for the exam since it is already mid-June.

“We don’t even have the time to collect resources, practice mock papers, and it is more difficult for those who are changing their streams for their undergraduate exam. Online coaching classes have already started for CUCET and those with high-internet access already have an edge over others,” she had pointed out.

Introducing a new mode of entrance tests without giving time for students to familiarise themselves with the syllabus and paper pattern may put students who don’t have uninterrupted access to learning material at a disadvantage, said educationists.

Advocating a more “inclusive admission” policy, a former DU executive council member told Hindustan Times that there have been several research reports documenting centralised tests such as CUCET, which have concluded that they have favoured people from affluent backgrounds who have access to better study material.

However, the cancellation of board exams has given way to demands for CUCET so that some form of an exam is conducted for admissions to UG courses in DU. But, experts caution that the central education ministry should not implement an exam without proper consultation with the university’s academic council and other statutory bodies. Moreover, students argued that conducting CUCET will contradict the NEP, which freely allows them to switch streams.