If you know the mindset of Amit Shah and Narendra Modi, they would not be really disappointed with the results of the Delhi polls, in spite of winning just around 10 per cent seats.

A fortnight before the assembly polls in Delhi, the top brass of the BJP got an internal report that sent it into frenzy. The report said the party is going to be wiped out in the polls and it may not win even a single seat in the 70-member assembly.

The report raised another red flag: most of the BJP’s core voters were willing to vote for Chief Minister Arvind Kejriwal and the BJP’s vote share was likely to fall below 30 per cent, almost half of what the party had secured in the Lok Sabha polls.

The BJP leadership realised a wipe-out in Delhi would not only be an electoral setback but would also weaken the party’s position on its core ideological issues — Article 370, the Citizenship Amendment Act, the proposed National Register of Citizens and the larger issue of Hindutva. A senior leader, who was present when the report was discussed, argued a drubbing in Delhi would be seen as a referendum on the issue and the result would demoralise the cadres.

But, nobody knew how to address the problem. On the development front, the BJP had nothing to say in Delhi. It was on the back-foot because of the decline in growth and its inability to generate jobs. More importantly, the BJP did not have a single leader to match Kejriwal’s stature.

Left with no other option, the BJP decided to fall back on its default option — politics of polarisation. Home minister Amit Shah decided to enter the battle fray with the trademark BJP ploy of crying wolf, insinuating that the anti-CAA protesters at Delhi’s Shaheen Bagh were a threat to the country and they need to be taught a lesson in the polls. Simultaneously, junior leaders were asked to throw away the fig leaf of hypocrisy and go all out to incite hatred and fear. 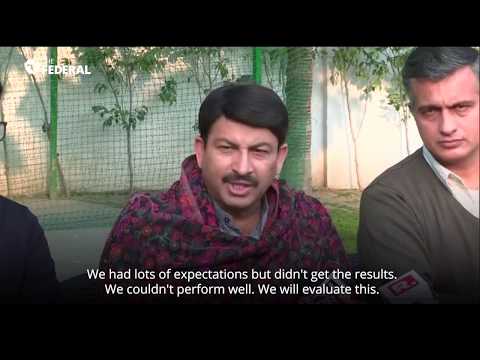 That the BJP was adamant on its hate agenda was clear from two incidents. One, when Parvesh Verma and Anurag Thakur were banned from campaign by the Election Commission, the BJP gave them the opportunity to speak in the Lok Sabha, thereby endorsing their deplorable speeches and showcasing their views as its official line. Two, when Prime Minister Modi hit the campaign trail, after talking for almost 30 minutes about his government’s schemes, he finally came to the real point: Shaheen Bagh and the “threat” from protesters to India.

Now that the results are out, the BJP would be secretly happy with its strategy. It would be happy that from a near washout, it has actually managed to win seven seats and bag around 40 per cent votes, a gain of eight per cent over the previous assembly polls and a 15 per cent increase from the vote-share predicted in its internal surveys just a fortnight ago.

Its addition, the BJP would be happy its politics of polarisation energised its cadres, consolidated its core votes, created a buzz in Delhi and put doubts in the minds of its opponents during the final stage of the campaign. As AAP leader Saurabh Bharadwaj told NDTV on Tuesday, voters in Delhi suddenly became silent a few days before polling, making everyone wonder if the BJP campaign was working. The BJP would be silently kicked about the fact it forced Kejriwal to respond to its “Hindutva agenda” and invoke Lord Hanuman’s name on several occasions.

Bear in mind the BJP’s gain of 8 per cent votes is against a government that enjoyed high popularity ratings, for five years it had worked on Delhi’s schools, healthcare network, and power and water supply, creating the impression of a government that works for making the lives of its electorate better.

So, how does all these fit into the larger context?

Encouraged by the results, the BJP would now employ a similar campaign in Bihar and West Bengal. In a few days you’d hear its leaders raise the decibel level on Hindu-Muslim, Pakistan, biryani, NRC, changes in the citizenship law and Kashmir, throwing the bait at Mamata Banerjee in Bengal and the rest of the opposition in Bihar.

The problem with Bengal and Bihar is that the existing political milieu in these states is very different from the one that exists in Delhi. In Bihar, the opposition does not have a single leader of stature to respond to the BJP’s divisive agenda. The only person who could have countered it, Nitish Kumar, is sitting in the BJP’s lap.

Bengal, of course, has Mamata Banerjee. But, both in terms of performance and temperament, she is not Kejriwal. Her government does not enjoy high popularity ratings — something that could have been a strong counter to politics of polarisation.

The other problem with the Trinamool Congress is that it is actually seen as a party of left-liberals and Muslims, something that helps the BJP polarise the electorate. In the 2019 Lok Sabha polls, the BJP managed to make deep inroads into Bengal through its politics of polarisation because Mamata Banerjee tried to counter it by underlining her credentials as a champion of “secular” politics. This strategy, as Delhi has shown, is fraught with risks because it helps the BJP to appeal to the majority.

So, what can the opposition learn from the Delhi outcome? How can it counter the BJP’s politics of polarisation?

One of the biggest reasons for the AAP’s victory in Delhi is the complete decimation of the Congress. From the 10 per cent vote it secured in 2015, the Congress plummeted to a vote share of below 4.5 per cent. But, this happened primarily because the Congress did not contest the Delhi polls seriously, in all likelihood because of a tactical alliance with Kejriwal’s party. In Bengal, it would have to strike a similar deal with Mamata Banerjee to ensure the anti-BJP vote is not divided.

The other important lesson to learn from Delhi is that to win an election, opposition leaders will have to practise soft Hindutva and reclaim the ‘nationalist’ tag from the BJP. Notice how Kejriwal invoked Lord Hanuman’s name during the campaign and how his cadre made it a point to chant ‘Vande Mataram’ and ‘Bharat Mata ki jai’ at election rallies.

The margin of AAP’s victory in Chandni Chowk, Okhla, Ballimaran, Seelampur, Matia Mahal and Mustafabad — some of the constituencies with sizable Muslim votes — shows India’s minorities will not vote for the BJP, not at least in the near future. The challenge for the opposition is now to ensure it gets a substantial chunk of Hindu votes to keep the BJP out. This can happen only if opposition leaders like Mamata Banerjee and Tejaswi Yadav perfect the art of being acceptable to both the minorities and liberal Hindus.

The BJP’s religious chants will grow louder in the coming months. Don’t be surprised if the opposition is forced to invoke its own gods to reclaim Hinduism from the BJP.