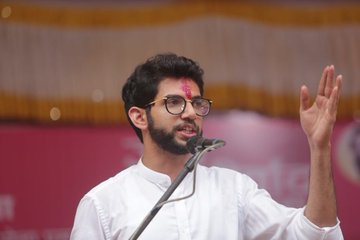 Maharashtra, the country’s worst-hit state in the pandemic, is preparing for a third wave of COVID-19, state Tourism and Environment Minister Aaditya Thackeray said on Sunday.

At an NDTV ‘summit’ in New Delhi, Thackeray said the third wave is “likely soon”.

“Every decision the state is taking today is based on the task force we created last year… as per science and medical facts, not by politics,” he said.

“We have come to the genuine belief that under-reporting is not going to help… Now we are preparing for the third wave. We have five lakh beds, 70 per cent of them oxygenated.”

The minister’s comments came as the Maharashtra government and the Centre continued to trade charges over the availability of Remdesivir.

The Mumbai Police recently questioned a pharmaceutical company chief over alleged excess stock of Remdesivir, an official said on Sunday.

The state and central governments had allowed him to sell 60,000 vials, originally meant for export, in the domestic market, the official said, adding he was allowed to leave after producing proper documents.

The BJP criticised the police action, saying the Shiv Sena-led government was playing politics amid the pandemic.

But former chief minister and Leader of the Opposition Devendra Fadnavis admitted the BJP in Maharashtra had received special permission from the Centre to purchase the 60,000 vials

“Four days ago we had requested Bruck Pharma to supply us Remdesivir, but they couldn’t until permission was given. I spoke to Union minister Mansukh Mandaviya and we got the FDA’s permission,” he said.

“We [BJP leaders] had contacted Bruck Pharma to supply the stock to Maharashtra as the state is facing a shortage of Remdesivir vials. We even informed the state FDA minister about it and approached the Union government seeking necessary permissions.”

A police official said they had taken action “based on specific information”.

“After export was banned, he had stocked up at least 60,000 vials of the drug. The state and central government have allowed him to sell it in the [domestic] market, he said.

“As we found he did not violate any laws, we did not take any legal action against him. He was questioned about the stock, following which he produced necessary documents.”