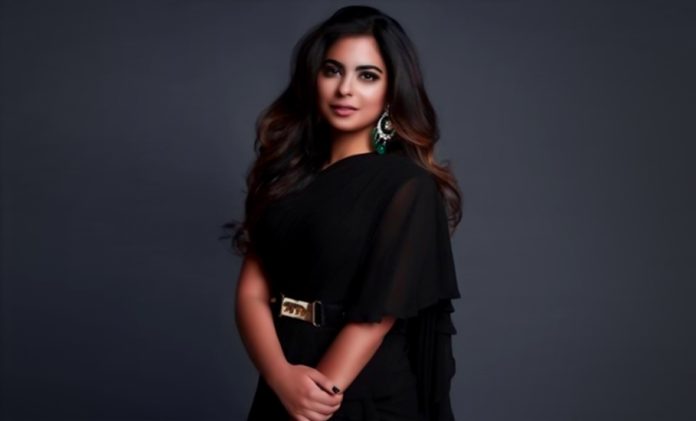 According to Isha, Reliance Retail, served over 200 million registered customers at stores and digital platforms in 2021, a number equivalent to the collective population of the United Kingdom, France and Italy. Pic: Instagram

Ranked second on a list of youngest billionaire heiress at the age of 16 in 2008, Isha Ambani, the daughter of Mukesh Ambani, chairman of energy-to-technology conglomerate Reliance Industries Ltd., will now take over a subsidiary of her father’s sprawling $217 billion empire.

As part of Mukesh Ambani’s grand succession plan for Reliance Industries, the 30-year-old Isha Ambani, was introduced by her father at the RIL’s 45th AGM (Annual General Meeting) on August 29, as the leader of Reliance’s retail arm. In June, he had appointed  his son Akash Ambani as chairman of the telecom unit, Reliance Jio Infocomm. It was the turn of Akash’s twin sister, Isha, to be anointed as one of the next-gen leaders and head one of the company’s retail business subsidiary – Reliance Retail Ventures.

Born in October 1991, Isha studied psychology at Yale University, after which she did an MBA from the Stanford Graduate School of Business. She also worked at McKinsey & Company in the US and is currently in charge of the strategic development and implementation for all marketing teams, including digital, advertising, communications, and creative for Reliance Retail Ventures Limited. Besides, she also helped her brother with branding and consumer related decisions.

Reliance Retail and Reliance Jio are subsidiaries of the family’s oil-to-telecom conglomerate with the $217 billion Reliance Industries Ltd being the flagship firm.

Isha is also credited for launching fashion portal Ajio in 2016. According to her father, Isha was the inspiration behind the launch of Jio.

Also read: Isha Ambani set for top role: All you need to know about Mukesh’s daughter

During an event in 2018, Mukesh had said it was Isha who was the brain behind Jio, which was launched in 2015. In December the same year, Isha and Akash introduced Jio 4G services at a star-studded event.

“The idea of Jio was first seeded by my daughter, Isha, in 2011. She was a student at Yale (in the US) and was home for the holidays. She wanted to submit some coursework – and she said, ‘Dad, the internet in our house sucks’,” Mukesh said.

“Isha and Akash belong to India’s young generation that is far more creative, far more ambitious and far more impatient to become the best in the world. These young Indians convinced me that broadband internet is the defining technology of our age and India cannot be left behind,” he added.

In 2014, Isha and Akash were appointed to the boards of Reliance Jio Infocomm Ltd and Reliance Retail Ventures Ltd. At that time, Isha was 23 years old. In the Fortune’s 40 Under 40 — an annual list of influential individuals under the age of 40 — Isha was among the “emerging leaders” across the world, in its 2020 edition. Isha and Akash Ambani were included in the ‘technology category’.

The most talked about extravagant marriage in India

Isha married her childhood friend, Anand Piramal in a star-studded ceremony in December 2018 at the Ambani’s residence, Antilla. He is the son of Piramal Group’s Ajay and Swati Piramal, who are close friends of the Ambanis.

International pop star Beyonce Knowles performed at their wedding and celebrity guests  included the likes of former first lady of the US, Hillary Clinton, Saudi Arabia Oil Minister Khalid al-Falih, Bollywood A listers and India’s swish and wealthy. The week-long pre-wedding festivities in Udaipur and the biggest reception party at Jio Garden made headlines.

Moreover, the lavish wedding, had its own fan following on Instagram and social media. According to celebrity magazines, her in-laws reportedly gifted her a US$ 61.2 million Mumbai mansion, which features a diamond theme.

Often photographed with her father at cricket matches. (He owns IPL team Mumbai Indians), at 16, she held a stake worth about $80 million in Reliance Industries, the petrochemicals giant her father runs.

The spotlight at the 45th RIL AGM was clearly on Isha Ambani as she announced that India’s conglomerate will enter the fast-moving consumer goods business this year, which is currently dominated by companies like Hindustan Unilever, Nestle India, ITC, Britannia Industries, Dabur and others.

“We will soon start marketing quality goods produced by tribals and other marginalised communities across India,” she said. Besides this big reveal, Isha Ambani also detailed the partnership between JioMart and Mark Zuckerberg’s WhatsApp. JioMart-Whatsapp users can order groceries by using WhatsApp pay, cash on delivery and other payment methods, she said.

According to Isha, Reliance Retail, served over 200 million registered customers at stores and digital platforms in 2021, a number equivalent to the collective population of the United Kingdom, France and Italy.

“We welcomed 520 million walk-ins to our stores, a growth of 18 percent year-on-year and 4.5 billion visits to our digital platforms, up 2.3x YoY,” she said at the RIL AGM today. While their digital commerce platforms delivered 6 lakh orders everyday, adding that their digital commerce platforms of reliancedigital.in and JioMart provide comprehensive omni-channel network, enabling them to deliver 93 per cent online orders from stores within 6 hours.