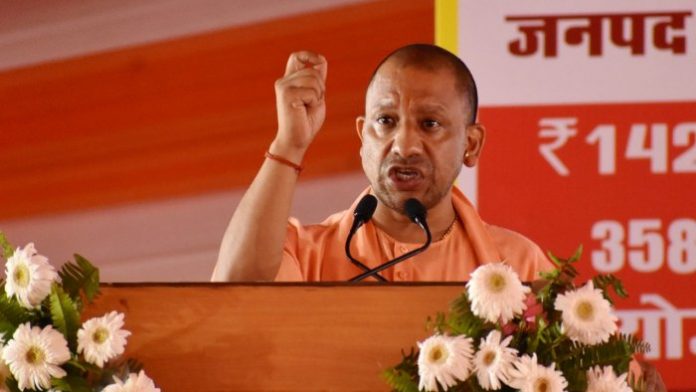 Ending frenzied speculation that had recently gained momentum over the constituency from which Yogi Adityanath will seek election to the Uttar Pradesh Assembly, the BJP on Sunday (January 15) finally declared the chief minister’s candidacy from his home turf of Gorakhpur Urban, besides releasing the first list of 107 candidates for the poll-bound state.

The party’s decision to field Adityanath, Mahant of the Gorakhnath Mandir, from his bastion came amid rumours that he may contest the polls from a constituency in Ayodhya, Mathura or even Varanasi.

As soon as the BJP made its list of candidates public, a seemingly orchestrated campaign began from a section of the media on the “bold move” the party made by fielding the CM from his home turf.

There were commentaries aplenty on how Adityanath, the BJP’s controversial and feisty hardline Hindutva mascot in UP, had decided to bite the proverbial bullet and face the hustings in Gorakhpur despite the possibility of a “tough electoral contest” with a resurgent Akhilesh Yadav-led Samajwadi Party.

Breathless mentions were also made on the shock defeat the BJP had suffered in 2018 when it lost the Gorakhpur Lok Sabha seat to the SP in a by-election necessitated by Adityanath’s appointment as UP CM.

Also read: Why Swami Prasad Maurya-Akhilesh handshake could spell trouble for BJP
Adityanath had represented the Gorakhpur Lok Sabha seat for five consecutive terms since 1998, taking over from his guru, the late Mahant Avaidhyanath, former Mahant of the Gorakhnath Mandir.

To many within the BJP ecosystem and beyond, Adityanath was always a ‘natural choice’ to contest the Gorakhpur Urban seat ever since he declared his intention of contesting the upcoming polls instead of bypassing the poll process by continuing as a member of the UP Legislative Council. So why then were there hectic rumours of the BJP contemplating to field the saffron-clad CM from some other constituency?
A source close to Adityanath told The Federal that he “never had the intention of moving to some other seat and speculation about him being fielded from Ayodhya, Mathura or Varanasi was triggered by the BJP’s top leadership in Delhi”.

The Adityanath-aide, however, also conceded that the CM was “initially not planning to contest the polls as his tenure as an MLC would end in July this year… he wanted to focus on campaigning for the party because he had the option of contesting a by-poll or returning as MLC after the BJP won the polls but then the central leadership convinced him that not contesting the polls would send a wrong signal and he must declare that he would fight the upcoming elections.”

Those close to Adityanath insist that the CM had, “from the moment he declared he will contest the polls”, made it clear to the party leadership that he will seek election from Gorakhpur Urban.

Also read: How UP’s 80% are polarising against Yogi Adityanath

However, in wake of the SP’s sudden resurgence and internal surveys conducted by the party that apparently suggested a “very close contest”, the central leadership of Prime Minister Narendra Modi, Union Home Minister Amit Shah and party chief JP Nadda wanted Adityanath to contest from Ayodhya.
Two other state leaders, who do not share a comfortable rapport with the CM, reportedly suggested fielding him from either Mathura or Varanasi South.

“Each of these seats is high on symbolism which made the rumours believable – Hindutva, Ram Mandir (in Ayodhya), Kashi Vishwanath (Varanasi) and movement for reclaiming land in Mathura where Aurangzeb demolished a temple to build a mosque but, at the same time, Yogi ji moving out of Gorakhpur to any of these seats would have its own electoral challenges and these are all seats where Mahantji (Adityanath) would have to depend on the party organisation for his campaign instead of his own team of people who have run his campaigns in Gorakhpur for over two decades,” another Adityanath confidant told The Federal.

So was the BJP’s central leadership deliberately forcing Adityanath to an untested constituency? Journalist Manoj Singh, who runs the Gorakhpur Newsline portal, told The Federal, “I think the decision to field Adityanath from Gorakhpur is a consequence of several factors. Personally, I feel Adityanath would never think of contesting from any other seat. He has nurtured the constituency ever since Avaidhyanath named him his political and spiritual heir in the early 1990s. This is the safest seat for him in all of UP. Though it may sound ironical, despite the Hindutva rhetoric, neither Ayodhya nor Mathura would have guaranteed him victory and I doubt if Modi would have wanted Yogi to contest as MLA from his parliamentary seat. At the same time, one may wonder why Adityanath, who projects himself as an all-powerful leader and the only other claimant of the title of Hindu Hriday Samrat after Narendra Modi, would want a safe seat?”
Also read: UP voters favour Modi & Yogi, but Akhilesh may see an improbable win

He explained though Adityanath may have won from Ayodhya, Mathura or Varanasi by virtue of being a sitting CM and a man who has used his current position to amplify his electoral appeal. “He would never be bold enough to take the risk… by declaring that he will seek election to the assembly, he walked into a trap – the only way out was to put his foot down on the choice of his seat… even contesting from some other constituency within the Gorakhpur parliamentary seat (there are four other assembly segments) would have been a risky proposition,” the commentator added.
Harsh Sinha, a professor at the Gorakhpur University and keen observer of eastern UP’s politics, agrees. “In Ayodhya or Mathura, Adityanath would be largely at the mercy of the party organisation… he would have to use the Hindutva card much more aggressively than he already does and that may or may not have served him or the BJP well in other parts of UP or the other states that are going to polls simultaneously,” Sinha said.
Singh also added that Adityanath’s need to stay put in Gorakhpur also emanates from his “fear that a section of the party leadership is driving him away from his home turf”.

“Yogi ko bhay tha ki Gorakhpur ki zameen se dheere dheere hatt na jayein (Yogi was afraid that he may be alienated from Gorakhpur). After becoming the CM, he had to make his Hindu Yuva Vahini (a militant Hindutva brigade that swears fealty to Adityanath alone) inactive; he also had to focus on other parts of the state and then, because of the BJP’s Ayodhya politics and Varanasi being Modi’s Lok Sabha seat, he had to devote a lot of time to Ayodhya and Varanasi In the 2018 Gorakhpur by-poll, the BJP did not let him field a candidate of his choice and the party lost but the message Adityanath took away was that the party was deliberately trying to reduce his influence in Gorakhpur. He has not developed any alternate seat for himself, so where will he go if Gorakhpur also slips away,” Singh said.

Compared to other seats that were being speculated about, the Gorakhpur Urban constituency is, arguably, a cakewalk for the UP CM.

Sinha says Adityanath has ensured a lot of development work in this segment and he knows every small nook and cranny of the constituency. Besides, the RSS has had a strong influence in Gorakhpur Urban for over four decades and caste arithmetic here is also favourable as the seat has a dominance of Kayastha and Bania voters along with Nishads (backward caste, boatmen community that the BJP has been aggressively wooing).

The Gorakhpur Urban seat has been with the BJP since 1989. The current MLA, Radha Mohan Das Agarwal, has been winning it since 2002. However, Adityanath’s nomination as a candidate from Gorakhpur Urban comes at the cost of Agarwal, something the CM’s detractors hope will dent his poll prospects.

Catch all our stories from Uttar Pradesh

Agarwal, despite being a four-term MLA, was not included in the Adityanath cabinet and rumours of his disaffection with the CM have been doing the rounds for some time. However, both Sinha and Singh are certain that Adityanath will face “no resistance or revolt” from Agarwal.

“Agarwal used to manage all poll campaigns of Adityanath and even Avaidyanath. In 2002, when the BJP refused to give Agarwal a ticket, Adityanath backed his candidature from the Hindu Mahasabha and Agarwal won. He subsequently joined the BJP. Agarwal knows that if he has lost his seat, Adityanath will also compensate him – perhaps have him elected as a MLC or get him a party ticket for the Lok Sabha polls in 2024,” Singh says.