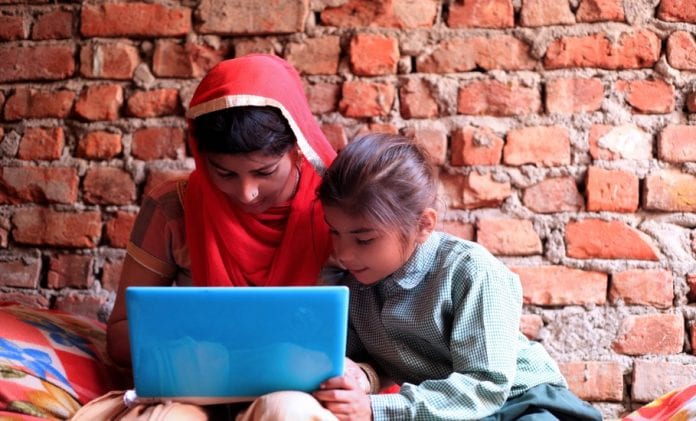 Unlike their classmates, Sarita and her two elder brothers wait for their father to return home from work in the evening, and hand over his mobile to them.

Sarita is a Class 7 student while her elder siblings are in Classes 11 and 12, and they all study at a Haryana government school. Her father leaves for office at 8.30 am and returns around 7 pm. Only then, the children get to access the assignments on his phone.

“Our teachers are helpful as they take our calls, help us with our homework and send video links for us to watch and learn,” says Sarita.

Sarita’s father works at a security agency. Her family can neither afford three smartphones, nor do they have a smart TV. Private schooling is beyond their affordability.

“The video links and WhatsApp assignments are not helpful for poor families like us. Our children are not learning anything,” says Sarita’s mother, hoping that the schools would reopen soon.

At least 70 per cent of the families in the village are facing similar problems.

The deadly virus is not just causing serious health concern, but is also ravaging education for the children. Parents, teachers and students alike find that online teaching cannot fulfil their academic needs.

Similarly, Lalit Das finds it difficult to study in the single room that he shares with six other members of his family. His father is a roadside vendor and sometimes Lalit helps him hawking sweetcorn. He finds it difficult to cope with online education as he is dependent on the mobile phone of his elder brother, who returns home late in the evening after finishing his day job. This has prompted the Class 11 student to become irregular with his homework and on some days, he is simply unable to finish his assignments.

Haryana had shut its schools on March 19, almost a week before the nationwide lockdown was imposed. Anticipating a long haul, the state had widened the ambit of the education-through-satellite (EDUSAT). Under this project, the state government telecasts teaching materials, class and subject-wise, through private and public DTH platforms for primary and secondary-level students. Every Monday, the state’s directorate of education circulates a fresh set of videos for Classes 1 till 12.

Jagatpal Singh, who teaches at a school in Yamuna Nagar, says, “Home can’t substitute a classroom and television can’t be a teacher. Children can watch videos once or twice, but can’t learn much. Almost 90 per cent of the government school students are from poor and lower middle-class families who can’t afford smartphones. Without face-to-face interaction, teaching is difficult. Worse, 60 per cent of the students are unable to respond to teachers since they have no access to phones,” he says.

Some children work around the problem by getting together at a common place and sharing the homework. Tanu Damla, a Class 7 student residing in Rattangarh village in Yamuna Nagar, says, “I help my classmates who don’t have access to television or smartphone.” Still, she says most children are unable to interact with their teachers.

Teachers worry that the quality of education is the biggest casualty of online teaching, besides that some children have begun losing interest in studies. They fear, this may further drive down the already-low literacy rates in the state, which currently stands at 76.6 per cent.

The Haryana Vidyalaya Adhyapak Sangh (HVAS), the state’s largest representative body of government school teachers, has expressed concern that teachers are unable to reach out to the children through phones.

CN Bharti, president, HVAS, says, “Teaching through EDUSAT or smartphones should be suspended as it is damaging teaching. We have found out that children are not watching videos on television. The assignments sent through WhatsApp go waste as more than 70 per cent of the children don’t have access to smartphones.”

Bharti says, classes conducted through the EDUSAT and assignments sent on WhatsApp overlap and create confusion in the minds of the children. The heads of poor families are discouraging the children, which is not good for overall literacy. Some parents are worried that their children are getting addicted to cellphones and instead of study materials, they are watching something else, he added.

Haryana has about 96,000 teachers and at least 21 lakh students enrolled in its government schools, from Class 1 till 12. “Nearly 13 lakh children are not active online and therefore, the involvement of the teachers too has shrunk,” says Bharti.

According to Adhikaar, an NGO, about 50 per cent of migrant workers who used to send their children to government schools in urban areas, such as Gurugram, Faridabad, Chandigarh, Hisar, etc. have left for their home states during the lockdown. Not only the livelihoods of the migrants who stayed back are at stake, but their children’s future has also come under a question mark as they are being discouraged to learn through smartphones and television,” says Ramesh Yadav of Adhikaar.

In private schools, the managements and parents are engaged in a war of words. The parents have been repeatedly writing to the government, seeking its intervention.

Sudhir Garg recently lost his job and therefore, could not deposit his child’s monthly fee. “I begged for a month’s extension but the school not only turned down the request, but also barred my daughter from appearing in the July exams,” he says.

There are parents who have paid the admission fee, tuition fee and development fee for the April quarter, and are now struggling to get these payments adjusted against the monthly tuition fees.

“Teaching through mobile phones or laptops by private schools is a hogwash and is likely to destroy the careers of students as they are getting addicted to phones, resulting in adverse behavioural changes,” says Garg.