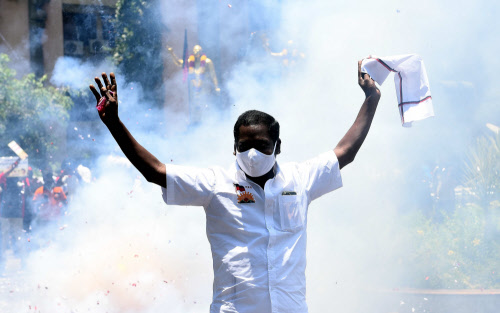 Mamata Banerjee has neutralized BJP’s growing force in West Bengal for the time being while MK Stalin has finally captured the throne at Fort St George in Chennai. Pinarayi Vijayan-led Left Front is firmly back in the saddle and Sarabananda Sonowal is likely to retain power in Assam. While winners try hard to express their happiness in the midst of severe restrictions imposed by the Election Commission in view of the COVID crisis, here are some reactions from political luminaries and analysts on the assembly election results so far.

“Many congratulations to @mkstalin on a resounding victory in the Tamil Nadu assembly polls.”

“An emotional day after fighting the world’s most destructive force, MO-SHA’s BJP. Filthy campaign aided by agencies and shameless EC. A momentous day for India & Bengal…”

“Victory is definite but no need to celebrate, be mindful of the pandemic. DMK has started a new chapter in history. Let’s protect ourselves and let’s protect the state.”

“Congratulations @MamataOfficial on your stupendous victory! Let us continue our work towards the welfare of people and tackling the Pandemic collectively”

“Congratulations to @MamataOfficial @AITCofficial @derekobrienmp on their splendid victory today. Kudos to the people of West Bengal for rejecting disruptive & divisive forces.”

“Congratulations to @vijayanpinarayi for an emphatic victory in Kerala today. The voters of Kerala have rewarded your model of governance & social security driven development. Best wishes for your next term in office.”

“I thank the people of Kerala for reposing faith in an unprecedented manner in the way that the previous LDF government tackled all the challenges that the people have faced and also the pandemic scourge. The government gave a Kerala model to the world on how to handle the pandemic.

“Hearty congratulations to the conscious public, combative Mamata Banerjee ji and the dedicated leaders and activists of the TMC, who defeated the BJPs’s politics of hate in Bengal! This is a befitting reply to the insulting sarcasm ”Didi O Didi” from the BJP”

“We really don’t want to celebrate but there was an anti-campaign against TMC. Our workers were under pressure. This mandate has given them energy. Still, we’re telling them not to celebrate due to COVID situation.”