In a dark year, selfish gene reminds us we’re born to survive 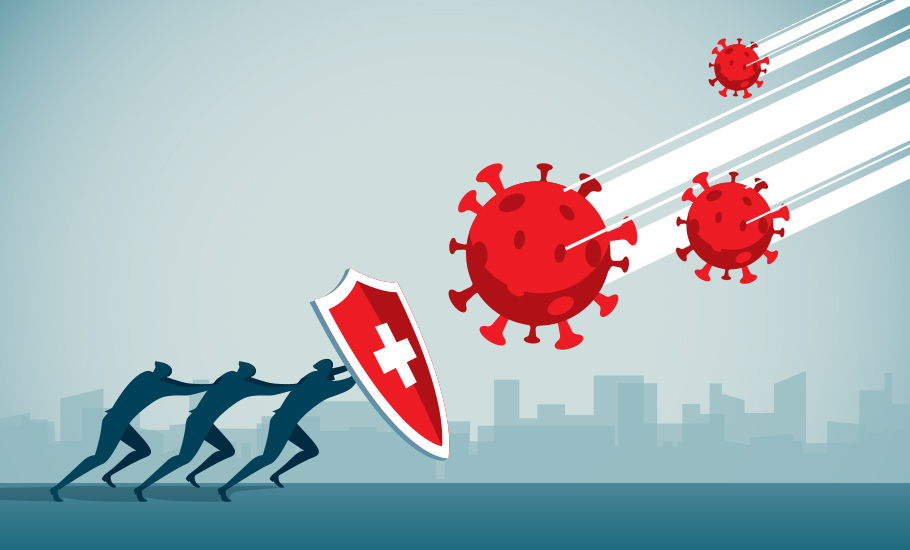 Poet Mohammad Iqbal famously wrote in his Tarana-e-Hind (ode to Hindustan immortalised by the line Saare Jahan Se Achcha) that there is something about us (Hind) that ensures its survival even when the world has been against us for ages (sadiyon raha hai dushman daur-e-zamana).

The same can be easily said about the human race: there must be something about it that ensures our continued existence in spite of frequent threats of annihilation.

Humanity's fight against the coronavirus is yet another example of its ability to persevere, fight and survive even the darkest hour.

Circa 2020 has been a terrible year, the proverbial annus horribilis. But, if you remember the dire predictions that marked the beginning of the coronavirus pandemic, it could have been a bigger disaster, the year of a veritable armageddon between life and death. At the beginning of the contagion scientific models had warned that the virus would burn through the world, infecting anywhere between 50-60 per cent of the global population and killing 2-3 percent of them. Even the best-case fatality rates (1-2 per cent) in the predictive models added up to a global death count in excess of 30 million.

Before you think humans are entitled to immortality as a race, bear in mind that almost every species that once dominated the Earth has been wiped out. Extinction is the rule of evolution of our planet. So, humans may well become extinct like the Dinosaurs one day. But, the coronavirus pandemic of 2020 will certainly not get the credit.

ISo, how did we humans survive the 2020 pandemic?

One explanation is that scientists have often gone overboard with their predictions. A decade ago, when the H1N1 flu erupted on the radar of epidemiologists such was the feeling of gloom and doom that many countries actually built catacombs to accommodate dead bodies. But, the pandemic turned out to be just an overhyped breakout of a mild cold. Something similarly may have happened with covid-19, thankfully.

You can’t of course blame scientists and health experts. In theory, a virus that is unknown to our immune system has the potential to cause havoc, like the Spanish Flu of 1918 did, and turn into a mass murderer. But somehow humans ride out the predicted cytokine storm triggered by new viruses.

Another explanation is that a virus, like almost every entity on the planet, is selfish. It wants to survive and thrive by using a human body as its host. And, because it doesn’t want to run out of hosts, it doesn’t want to intentionally kill humans it infects. So, even the most cruel viruses somehow contrive to spare us.

But, there is something much more to human survival than unreliable pandemic punditry and a selfish virus that can’t afford to kill us en masse. Let’s call this X-factor. Or, if you are a male, the XY factor. Survival, if you haven’t figured out yet, is in our genes. It is the foundation of genesis.

II Some of the survival behaviour is biologically inherited

In their delectable bestseller titled Sex At Dawn, authors Christopher Ryan and Cacilda Jetha highlight how the very act of procreation, what we call sex, is actaully a series of copulatory events based on the idea of survival after a tough fight where just one egg and one sperm out of dozens and millions end up with the prized gift of life. What begins with a fight isn’t going to end without one, right?

III Or, maybe, it is all destined

The human body, as biologist Richard Dawkins tells us, is just a machine created by genes to ensure their own survival. These genes are, as the title of his book (The Selfish Gene) says unequivocally, are extremely selfish and are programmed for survival against every existential threat. So, and this is a bit of a dark comedy, humans can be grateful that the genes that created them as machines for their use guarantee our survival against invasion by some other organism, in this case a virus.

The other reasons, as the 2020 pandemic has taught us, are behavioural--based primarily on the most primitive of instincts, selfishness, and, on a smaller scale, it's very antithesis, altruism.

As an individual, an imminent danger can make humans go to any length to ensure survival. They can lock themselves down, stop interacting with fellow humans, treat their own family members and friends as pariahs if they are ill, treat everyone with suspicion, and basically live the idea of I, Me, Myself. (That we begin to tire of these strategies once the threat begins to recede in our perception is a different story headlined by another brand of selfishness.)

Collectively, of course, they can be inspired by the higher ideal--the desire to serve others. But this trait is rare and is manifest mostly because of professional ethics or exigencies, the kind we saw among health-care workers, scientists and the species we collectively call humanitarians. But, this gift of collective altruism manages to rescue humans with its achievements--medical interventions, scientific inventions--when the inherited selfish gene in us fails.

The year that’s gone by was the darkest since the tumultuous era of the second world war. Yet, it reminded us that the human race continues to have the traits--inherited, learnt and devised-- that ensures its survival.

As we enter 2021, this is a cause for optimism and hope that Iqbal’s prophecy may apply equally to humans.