Dharavi, Asia’s biggest slum located in the heart of financial capital Mumbai, has reported more than 100 COVID-19 cases in the past few days. And, the numbers are still rising.

Maharashtra, the state worst-affected due to the virus outbreak, is already struggling to contain the pandemic. It accounts for 232 of the total 590 deaths reported nationwide and also has the highest number of cases as on Tuesday. And now, with Dharavi turning into a hotspot, the future only looks grim.

Social distancing, the magic word that is being preached as the most effective tool for preventing the virus spread, is essentially a myth when it comes to Dharavi. One of the major constraints in the fight against the virus in Dharavi is obviously its space crunch that leaves no ‘room’ for social distancing, but to what extent?

In a plot of about 532 acres housing nearly a million people, it is impossible to follow social distancing or maintain sanitation and hygiene. The Federal tried comparing the living area in Dharavi with one of the most populated cities in the world on various scales to gauge the real issue of the crumpled locality.

Dharavi is spread over 2.1 sq kms of land, housing a population of around seven lakh people living in small shanties stacked next to each other.

“Around 10-12 people live in each house of size 100-120 sq ft. Then they have no separate bathrooms or toilets. So they have to go out and stand outside public latrines every morning. Then how can they follow social distancing norms?” asked Baburao Mane, a former local MLA.

He said the people living there are ill-informed and need to be made aware of dangers for stricter norms to be followed. He also mentioned thousands of industries have been closed which is affecting the lives of people who are completely dependent on their daily wages.

However, it’s not just a residential settlement but an economy in itself, dealing mainly in businesses of pottery, leather, textiles and recycling industry. Almost all the businesses are single room workshops used for work in the daytime while as a house in the nights.

Estimates show that there are around 20,000 small businesses creating employment for thousands of people living inside and outside of Dharavi. The financial turnover of these informal businesses could be between $650 million to $1 billion, said a New York Times report. 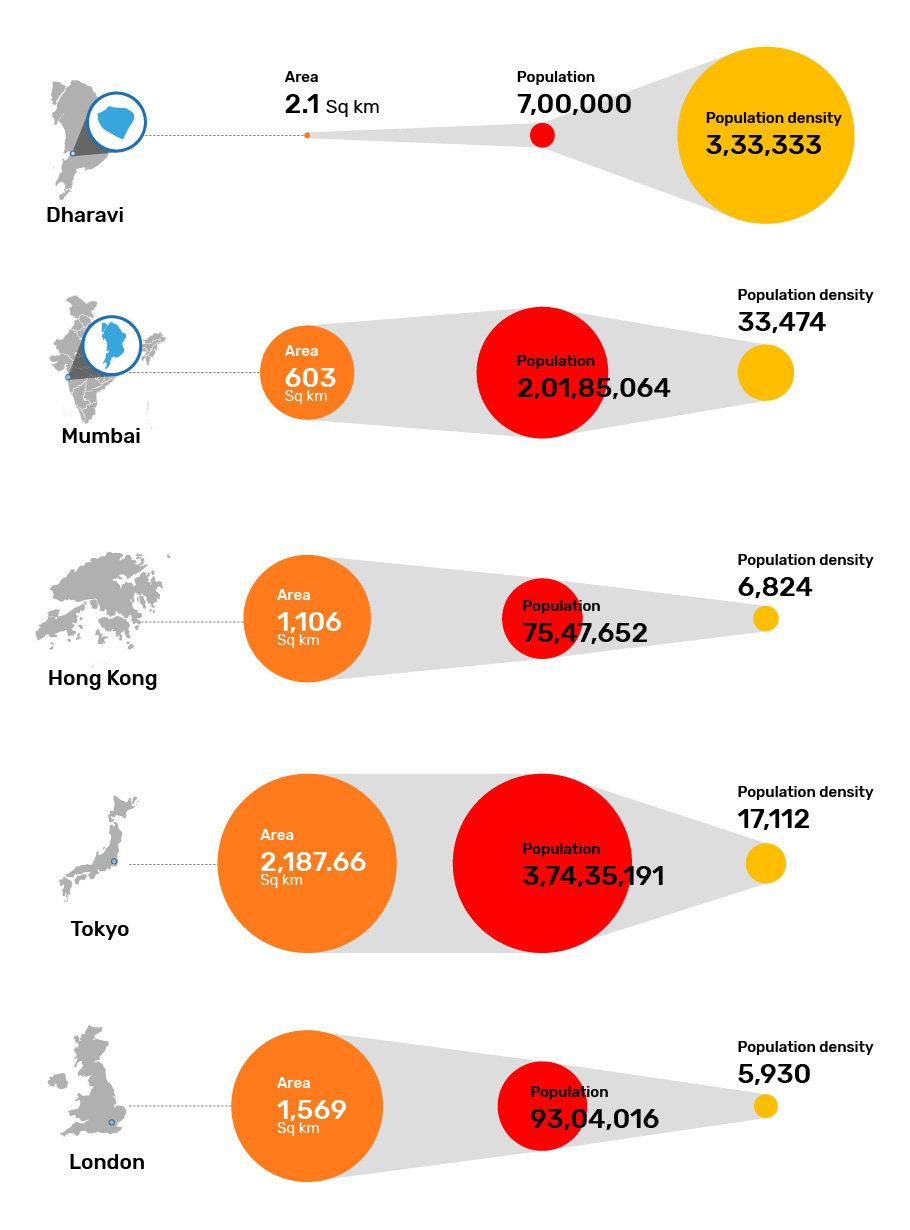 According to the Census 2011, with an area smaller than the size of New York’s Central Park, Dharavi houses around seven lakh people, indicating that around 3.3 lakh people reside in each sq km or approximately in each half of the area. This makes Dharavi 10 times more crowded than Mumbai which has a population density of around 33 thousand persons per square kilometer.

Related news: COVID-19: Anti-malarial drug to be tested on thousands in Mumbai slums

Tokyo with the highest 3.7 crore residential population has a density of around 17,000 people per sq km. Hong Kong and London, on the other hand, have 6,824 and 5,930 people living in the same area. Manhattan, in the daytime, becomes one of the densest localities with around 50,000 people in each sq km area.

Living in a metro

Most of the residents of Dharavi live in a single room or double room shacks, some of them two-storied with the average size of the shack being about 120 sq ft, housing four to 10 people. Hong Kong, which is also known for its tiny living spaces, has an average household size of around 430 sq ft*. 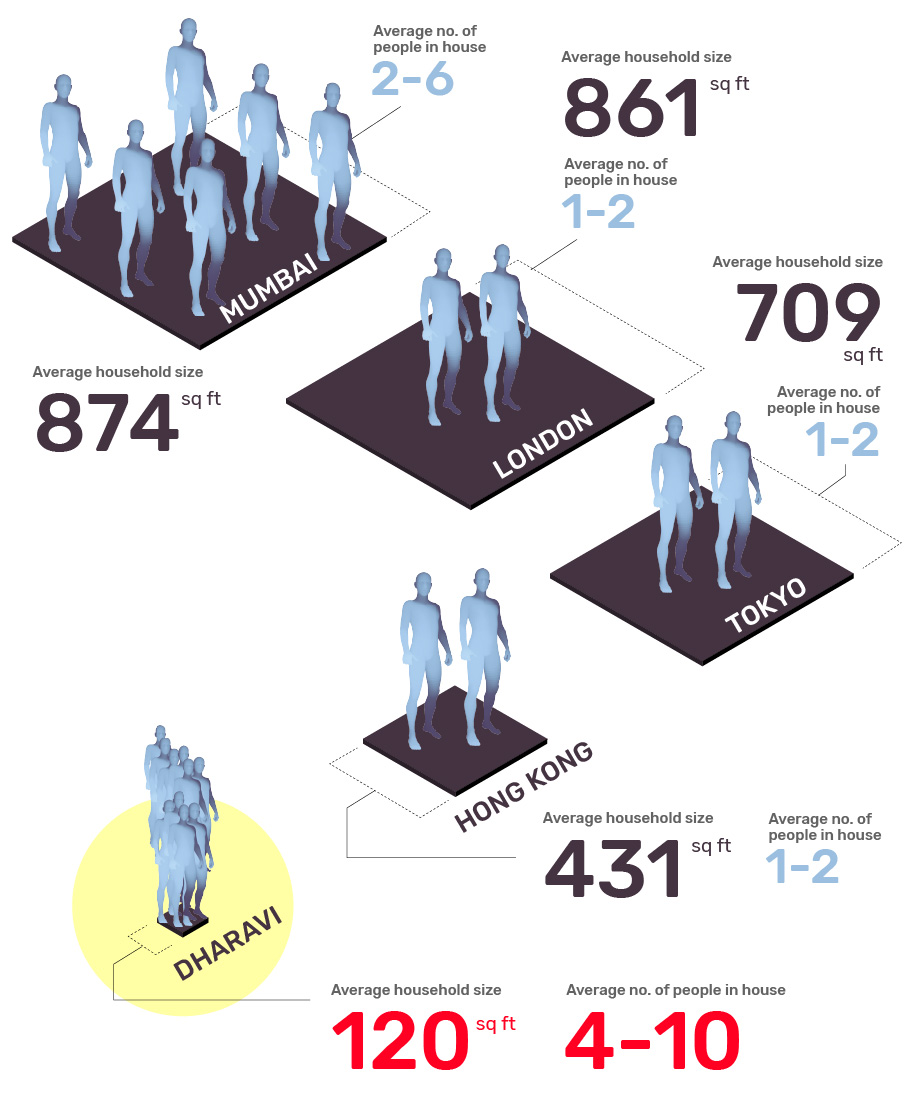 Meanwhile, Tokyo, which is the most populous city in the world, averages around 709 sq ft for a house, followed by London and Mumbai with the average sizes of a household in the range of 850 square feet. 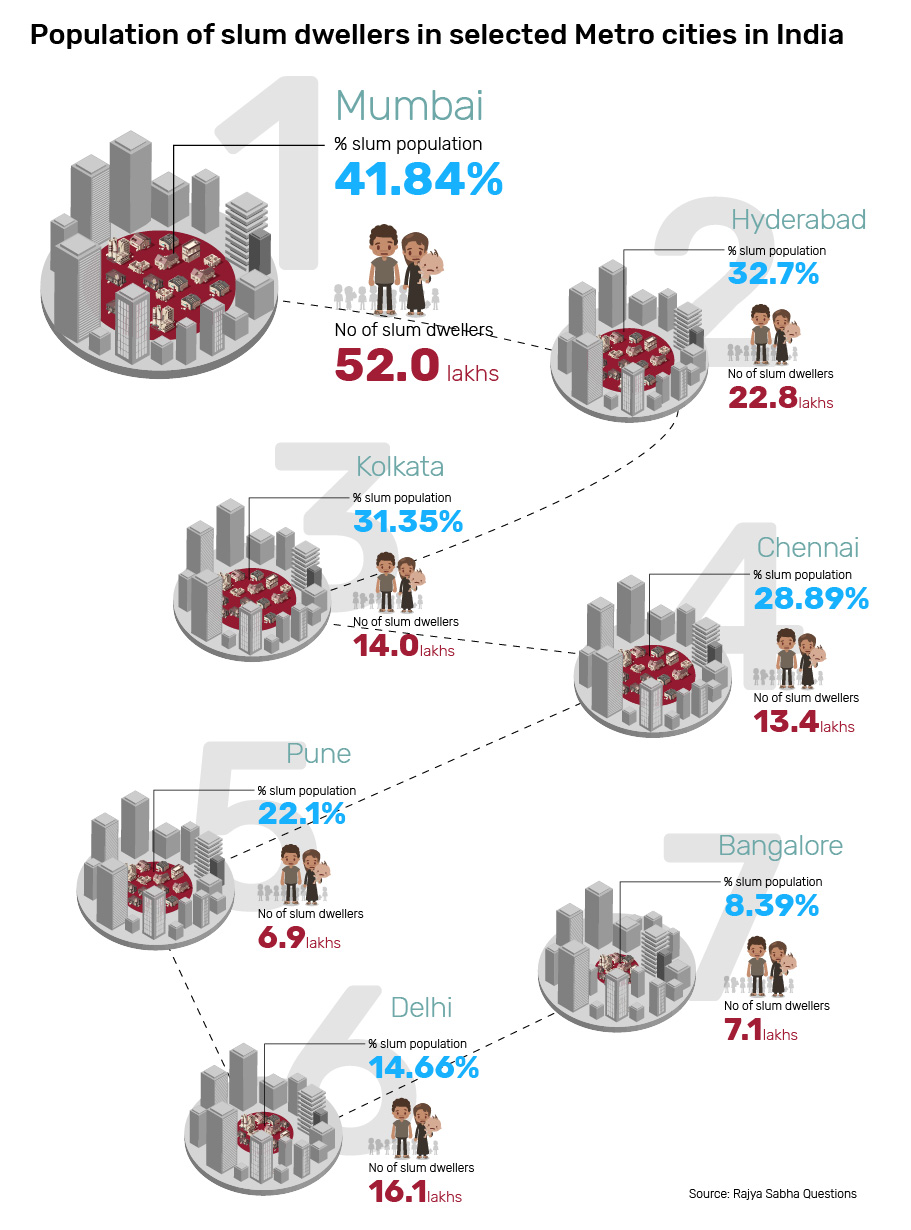 Among the top seven metro cities in India, Mumbai has the highest population of slum dwellers (52 lakh), followed by Hyderabad (22.8 lakh), Delhi (16.1 lakh), Kolkata (14 lakh) and Chennai (13.4 lakh). The IT hubs of the country, Bengaluru and Pune, have comparatively lesser people dwelling in slums — 7.1 and 6.9 lakh respectively.

Kiran Dighavkar, Assistant Commissioner, G North ward, Mumbai is spearheading the fight against the coronavirus outbreak in Dharavi. His ‘Mission Dharavi’ team consists of 20 doctors, 25 engineers, 50 nurses, 170 healthcare professionals, and 2,150 workers. “We have found specific zones inside Dharavi where new cases are being reported frequently and these zones have been sealed to curb the spread,” he told The Federal.

“We are trying to ensure people get all their supplies at their doorstep so they do not find any excuse to go outside. Ration, food packets and necessary medicines are being supplied to them on almost regularly. Since all of them are from financially weaker sections having meager earnings on hand-to-mouth basis, they need to be given all supplies for living and BMC is taking care of it,” he added.

Fever camps are also being organised in these zones to screen suspected patients, Dighavkar said, adding that the suspected patients are later moved to the institutional quarantine facilities and symptomatic patients are tested immediately. More than 37,000 people have been screened as on April 17, while over 200 have been tested for COVID-19 in Dharavi.

Sanitation and gathering of public at the public toilets and bathrooms is another inevitable challenge for Dharavi. Thus, all public toilets are disinfected on a daily basis with the roads and areas also being sanitised periodically. Currently, Dharavi has about 168 positive cases of the COVID-19.

*The actual sizes may be very small well below the average, which suggests the generalized scenario