A major chunk of the crop loans, which are intended to help poor and needy farmers, have ironically gone to augment the fortunes of rich farmers in the better irrigated urban districts in Maharashtra. While the drought-prone districts of Vidharbha and Marathwada, including Beed where farmer suicides are the highest, have not received even half of the total loan disbursal pocketed by all the ten districts in the wealthy western region.

Indeed, official data showed that the most urbanised, well-off regions in Maharashtra, including Pune, Kolhapur and Nashik, have claimed the highest share of agricultural loans than rest of the districts. In fact, these three districts put together have received loans to the tune of ₹9,909 crores.

In effect, this amounts to more than 20 per cent of the total loan disbursal of ₹47,971 crores in the last financial year.

Western Maharashtra, the wealthiest region of the state, which consists of ten districts, has bagged almost half of these loans. Out of these, eight are among the top gainers of crop loans, according to the data.

Loans amounting to ₹25,000 crores have been distributed only among ten districts, which include Ahmednagar, Pune, Kolhapur, Nashik, Solapur, Satara, Sangli, Jalgaon, Dhule and Nandurbar.

Ahmednagar has got the biggest disbursal of ₹4,700 crores in the previous year, followed by Pune (₹3,625 crores) and Kolhapur (₹3,232 crores).

Meanwhile, the total loans disbursed in the drought-prone regions of Vidarbha and Marathwada, seem paltry and does not even come close to the figures of western Maharashtra, even when summed up together. These regions, which have poor farmers who are the one in dire need of these agricultural loans, have claimed just ₹21,531 crores of the total disbursal and this amount has been distributed across 20 districts, shows official data.

Vidarbha and Marathwada consist of 11 and nine districts respectively.

Beed, an outlier district in the number of farmer suicides, has claimed about ₹1,583 crores in the previous year. This is just one-third of the highest gainer, Ahmednagar. Beed stands at number eleven on the list. 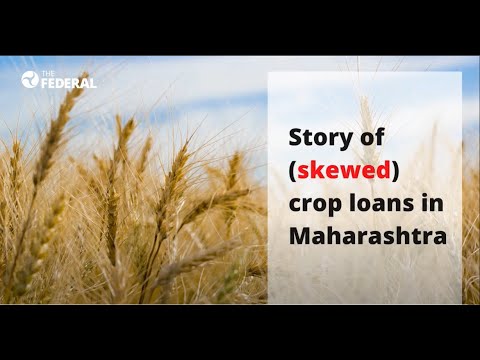 Among the districts of Vidarbha, Yavatmal has got the highest disbursal of ₹1,746 crores.

Konkan stayed at the bottom of the list with less than three per cent of the total crop loan disbursal. It consists of five districts namely, Thane, Palghar, Raigad, Ratnagiri, and Sindhudurg, and all of them have obtained crop loans totalling upto ₹1,377 crores during the same period.

One of the issues behind this huge disparity of crop loans among regions in Maharashtra is due to repurposing of crop loans. A bank employee who preferred to remain anonymous, said client and banks often convert vehicle loans into agriculture or crop loans.

“For example, if a person takes a loan for a commercial transport truck, he will attach an affidavit saying it will be used for agriculture and gets it converted into an agriculture loan. But in reality, the truck gets used elsewhere,” he said.

Moreover, there are many other loopholes and malpractices people follow as well to obtain loans under the agriculture loan category, and hence the disparity, said the bank official.

However, private sector banks could disburse only one-fifth of their funds as compared to PSUs as they have lent crop loans to the tune of just ₹4,870 crores.

Banks’ share of crop loans in Maharashtra (In Crores)

“Agriculture still plays a major role in the Indian economy, since about 50 per cent of the population of the country is still dependent on agriculture and allied activities. It has saved us during the pandemic and PSUs have saved the agriculture in many ways,” asserted Devidas Tuljapurkar, former director of the Bank of Maharashtra.

Based on the agricultural loan data of the state he said, “If you look at the profile of crop loans for the state of Maharashtra, the disbursement as of March 31, 2021, you’ll know the difference. All the private sector banks together could not lend as much as the 12 public sector banks have lent to the common citizen of India.” Thus, he highlighted the need of PSUs for the betterment and support of agriculture.

Tuljapurkar further added the necessity of addressing the issue of credit plans of the banks in the state for the next financial year. (A credit plan is the sector-wise distribution plan for moneylending of the bank for the coming year)

“This credit plan also follows similar disparities and we need to immediately address it to save banking and agriculture,” he pointed out.