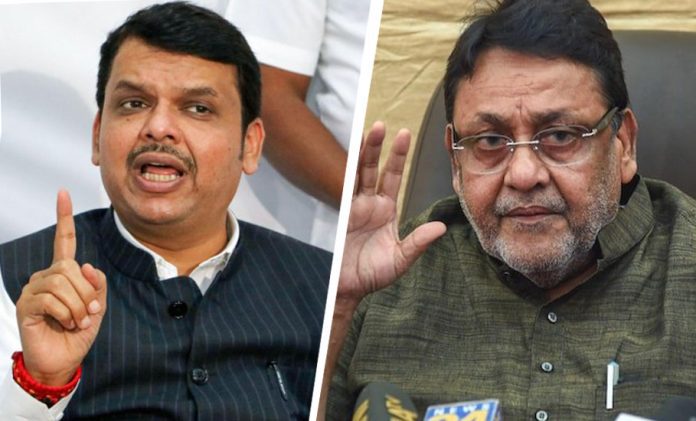 Even as Fadnavis on Tuesday (November 9) furnished “proof” in his post-Diwali “expose” of Nawab Malik’s alleged underworld connection, the NCP leader wasted no time promising to drop a “hydrogen” truth bomb on the ex-CM’s alleged links with the underworld.

The script of this mud-slinging match, involving “stunning” allegations and counter-allegations between BJP leaders and NCP minister Malik, must even boggle legendary Bollywood writers Salim and Javed, whose plots were known to be packed with melodramatic twists. In fact, Devendra Fadnavis, while addressing the press conference today started by saying that he is not narrating a Salim Javed script (clearly shows how Maharashtra politics is entwined with Bollywood) and this is not a “picture of the interval”.

Fadnavis’ key charge against Nawab Malik is that the latter had bought property from Dawood Ibrahim’s aide Salim Patel, who has been convicted in the 1993 Mumbai blasts, said media reports.

Fadnavis told the media that in Kurla, a 2.80 acre plot called Goawala compound on LBS Road has been registered with Solidus Investments Private Limited. “This company is related to Nawab Malik’s family. He was also in the company but he resigned after he became a minister. This plot was bought from underworld people for ₹ 30 lakh. Only ₹ 20 lakh was paid,” alleged Fadnavis, said a NDTV report.

Then he went on to question Malik: “Did you not know who Salim Patel is? Why did you buy land from convicts? And why did they sell a three-acre plot on LBS road for ₹ 30 lakh.”

Salim Patel, who was also the driver of Haseena Parkar’s (Dawood’s sister), was used by Parkar to acquire Dawood’s property after he escaped Bombay. Dawood is the mastermind behind the 1993 Mumbai bomb blasts.

Pointing out that this is a direct link to the underworld, Fadnavis said that “those who brought RDX, those who conspired to carry out the blasts, you are doing business with them?”

“I will send all this to competent authorities and also send it to Sharad Pawar so that he knows what his Minister has done,” he added. Why did you do business with the killers of Mumbaikars? he asked, said a Times of India report.

Terming the charges as “baseles” and flatly denying that he had bought land from the convicts of the 1993 Mumbai bomb blast case, Malik, who is fast turning into an expert in digging up dirt on people, has promised to drop a “hydrogen” bomb tomorrow by revealing Fadnavis’ links with the underworld.

Malik countered Fadnavis’ allegations saying that the BJP leader was trying to malign his image by connecting him to blast convicts and the underworld. “They did the same by saying that drug was recovered from my place,” he said, adding that he will send him a legal notice.

Malik, who had made serious allegations against NCB zonal director, Sameer Wankhede, which finally led to an internal inquiry against him, had earlier alleged that Devendra Fadnavis had appeared in a music video financed by a drug peddler who is behind bars. Fadnavis brushed off the allegation as “laughable” at that time, said the NDTV report.

Fadnavis claimed that Malik was attacking the Narcotics Control Bureau to get the anti-drugs agency to weaken the charge sheet against his son-in-law.

The Maharashtra cabinet minister’s son-in-law Sameer Khan was arrested by the NCB earlier this year in a drugs case and was later granted bail by a court. But Malik has made sensational claims that the BJP is encouraging the expansion of the drugs cartel in the state.