All eyes will be on the Supreme Court today (November 25) as it is expected to take a call on whether there will be an immediate floor test in the Maharashtra assembly, in which the BJP will be required to prove its majority to save its newly-formed government.

During an urgent hearing on Sunday, the apex court directed the Centre to furnish before it the Governor Bhagat Singh Koshyari’s letter inviting Devendra Fadnavis to form government as well as the communication of the BJP leader staking his claim.

A three-judge bench also rejected the opposition demand for a floor test within 24 hours, saying the issue will be dealt with only after perusing the two letters. According to BJP leader Ashish Shelar, the governor has given the party time till November 30 to prove majority in the House. 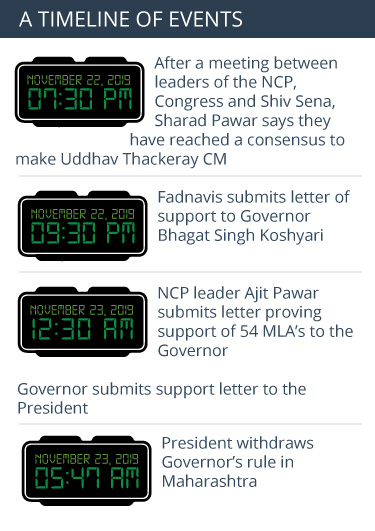 This comes after the Congress-NCP-Shiv Sena combine moved the top court after Fadnavis was sworn in as the chief minister and rebel NCP leader Ajit Pawar as his deputy, following a dramatic twist to the political drama in the state. A day earlier, NCP chief Sharad Pawar had announced that there was consensus in the combine to have Sena supremo Uddhav Thackeray as the chief minister

With Ajit Pawar by their side, BJP said it has the support of the NCP MLAs, a claimed turned down by Sharad Pawar. The Shiv Sena, however, claimed that the three-party combine has a support of 165 MLAs and can comfortably prove its majority in the 288-member assembly.

Ajit Pawar, meanwhile, set the political circles abuzz with his statement that he is still with the NCP and that Sharad Pawar continued to be his leader. Sharad Pawar, on his part said, there is no question of forming an alliance with the BJP. “Ajit Pawar’s statement is false, misleading and aimed at creating confusion, false perception among people,” he said.

Meanwhile, the NCP, the Congress and the Shiv Sena shifted their MLAs to three luxury hotels in Mumbai. Security was tightened outside the hotels to thwart any poaching attempts, police said.

“The Shiv Sena, NCP and Congress (together) have 165 MLAs. If the governor calls for an identification parade, in 10 minutes we can prove our majority,” Sena leader Sanjay Raut told reporters.

On the other hand, BJP’s Ashish Shelar told reporters that Fadnavis has the support of more than 170 MLAs and the BJP government will prove its majority on the floor of the House. In the 288-member Assembly, BJP is the single largest party with 105 MLAs, followed by Shiv Sena (56), NCP (54) and Congress (44).

NCP leader Nawab Malik said the swearing-in took place on the basis of bogus documents and that Fadnavis does not have the numbers. He said that out of the five NCP MLAs reported “missing” till Sunday morning, two returned and another one posted a message on social media stating he was with the NCP.

There was also a flurry of meetings with Sena chief Uddhav Thackeray meeting Sharad Pawar at the suburban hotel where the NCP MLAs were staying.

Demanding a floor test immediately, the Congress alleged that the BJP is “running away” from proving a majority in the assembly as it does not have the required numbers.

Ajit Pawar sworn in as Maharashtra deputy CM, Aaditya gets cabinet b...