Overcoming its initial sense of complacency in handling the coronavirus pandemic, the Telangana government has now pulled off a unique project that is being compared with the Chinese feat of building two emergency hospitals in record time in Wuhan, the epicenter of the outbreak.

While China had constructed two emergency hospitals in February within ten days, earning wide appreciation around the world, Telangana took 20 days to transform a 14-storey sports complex and stadium in Hyderabad into a 1,500-bed hospital.

This will now serve as an exclusive medical facility to treat COVID-19 cases.

A 1,000-member strong workforce sweated it out round-the-clock, even while following social distancing guidelines to convert the sprawling sports complex and tower, built in 2002, into a full-fledged coronavirus hospital. 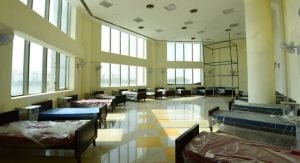 “The facility is equipped with 50 Intensive Care Unit (ICU) beds. It is ready for use,” the State Medical and Health Minister E. Rajender said.

“Like China, we can also do wonders in terms of making quick decisions and execution of plans,” said an official of Telangana State Medical Services Infrastructure Development Corporation (TSMSIDC) which executed the project.

For many years, the Sports Village at Gachibowli stadium, constructed on the eve of the World Military Games in 2007, was left unused. The complex, named after former Lok Sabha Speaker GMC Balayogi, had hosted the Afro-Asian Games in 2003.

The stadium, part of the sports complex, has a seating capacity of 30,000 people.

Six of the 14 floors were in semi-finished condition and were never put to use.

“As soon as we got the nod from the government, we started the refurbishing work on war-footing. Even the basic amenities such as water, sanitation and plumbing were poor and inadequate at the complex when we took up the task,” the official said.

All the verticals of the Corporation such as surgical and amenities wings worked in unison on a floor-management basis.

“We took up each floor as a unit and finished the work in record time. At the same time, other necessities such gas and oxygen pipelines were connected. The work was done in coordination with the Medical and Health department,” he said. 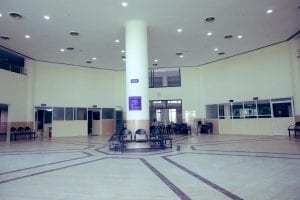 The hospital has been christened as Telangana Institute of Medical Sciences and Research (TIMS).

Two beds are allocated for each room and the beds will be separated by a distance of eight feet. “If the need arises, one more bed can be added to each room,” said B Nagender, the superintendent the state-run Osmania General Hospital and the nodal officer for the TIMS COVID-19 hospital.

About 25 doctors, 70 nurses, 6 lab technicians, sanitation, and security staff have been appointed for the exclusive hospital so far.

While the refurbished hospital may be a source of pride for the government in the fight against coronavirus pandemic, the larger concerns regarding poor healthcare infrastructure, grossly inadequate staff, shortage of medicines and equipment and overstretched government hospitals remain unresolved.

“The hype over the conversion of sports complex into a COVID-19 hospital is just a PR exercise for the government. This cannot hide the poor healthcare system in the state,” says analyst Rani Rudramadevi.

She pointed out that the Telangana Rashtra Samithi (TRS) had done little in the last six years in improving the healthcare delivery system.

“How can you fight the pandemic without adequate number of doctors, nurses, and other paramedical staff? There has been no recruitment of doctors in the last five years,” she said.

The state-run Gandhi Hospital in Hyderabad where COVID-19 patients are being treated is bogged down by a shortage of doctors, nurses and medical equipment, the critics say.

The state government’s proposal to rope in fresh medical graduates and retired doctors to treat the coronavirus patients has also evoked criticism. 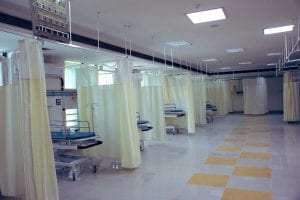 “After neglecting the issue of doctors’ recruitment for years, the government is now coming up with knee-jerk reactions and solutions that will not work,” Rudramadevi said.

Meanwhile, the private medical colleges in the state have agreed to provide up to 15,500 beds for treating coronavirus patients in response to a government request for ramping up the capacity to meet any eventuality.

There are 21 medical colleges in the private sector. Together, they have 15,500 beds, including 1,100 in Intensive Care Units (ICU) and 200 ventilators. The government has asked them to provide 10,000 beds initially, said Dr Karunakar Reddy, vice-chancellor of Kaloji Narayana Rao University of Health Sciences.

Telangana government’s initial response to the lockdown was one of complacency and casualness. Its contention was that an overwhelming majority of the coronavirus positive cases in the state could be attributed to the delegates who attended the Tablighi Jamaat congregation in New Delhi or their primary contacts like immediate family members and relatives and a few secondary contacts.

“If the Nizamuddin event had not happened, Telangana would have remained a completely safe zone,” was how the Chief Minister K. Chandrasekhar Rao had responded.ts complex in Hyderabad transformed into an exclusive Covid-19 hospital