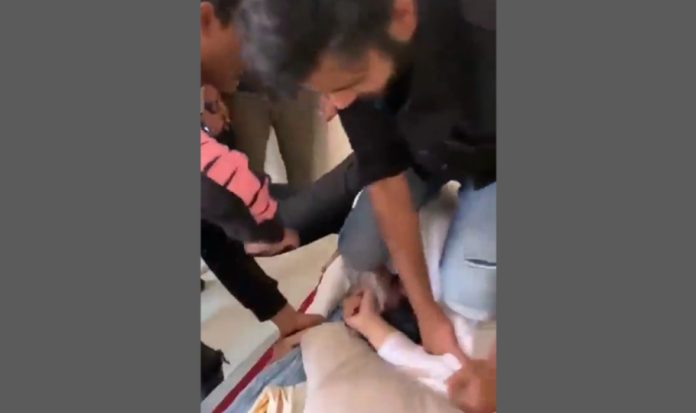 An undergraduate law student at a private college in Hyderabad was allegedly beaten up and sexually abused by senior hostel mates on November 1 for allegedly making objectionable remarks against Prophet Muhammad. The incident came to light on November 11 when the victim lodged a police complaint.

The victim, Himank Bansal, is a student at the ICFAI Foundation for Higher Education (IFHE) in Hyderabad. According to his complaint, the incident took place on November 1 at ICFAI Business School in Shankarpalli.

In a video that has now gone viral on social media, some older students can be seen sitting on him, slapping and kicking him, pulling out his purse from his pocket, and pushing him to the ground. One of the students can be heard saying, “We will fix his ideology, beat him into a coma…”

Bansal was allegedly forced to chant “Allah-hu Akbar” as a revenge for allegedly making derogatory remarks against the Prophet.

Irrespective of how hard the lobby is trying to spin this as regular senior -junio banter, it is not. Himank Bansal is being forced to chant "Allah Hu Akbar" and is being assaulted for his ideology. His freedom to religion is being violated in a masquerading secular nation. pic.twitter.com/AJX9ISWrnb

Shankarpalli police have registered a case and booked the accused under IPC sections 307 (attempt to murder), 323 (voluntarily causing hurt), 450 (house trespass to commit offence), 506 (criminal intimidation), and Section 342 (wrongful confinement) and several sections of the Telangana Prohibition of Ragging Act.

According to the police, Bansal has said in the complaint that on November 1, he was physically and sexually harassed by 15 to 20 individuals in his hostel room on the college campus. He has alleged that the other students punched him in the face, slapped him, kicked him in the abdominal area, touched his genitals, and force-fed him certain chemicals and powders.

Bansal has also alleged that a student tried to put his genitals into his mouth. They allegedly tore his clothes, stripped him, and beat him up one after the other.

The college administration has suspended the accused. However, it is under fire for the delay in acting. Bansal had reportedly written to the IFHE authorities, demanding that a formal complaint be filed against the accused.