Telangana Chief Minister K Chandrashekar Rao (KCR) in his first official statement since the rape and murder of a woman veterinarian near Hyderabad suggested to keep women off from night shifts, as a possible measure to ensure their safety.

The comment has landed him in a soup. Describing the incident as inhuman KCR while addressing a group of state transport employees said, “Just the other day, a lady doctor was killed. Are they humans? They are animals. So I am saying, let the women RTC (Road Transport Corporation) employees not be put on night duty.”

He also ordered officials to set up a fast track court to conduct the trial in the rape and murder case expeditiously.

A statement from the chief minister’s office mentioned that the officials were instructed to ensure that the culprits get tough punishment through the hearing in the fast track court.

The statement released by the CMO also stated that the government was ready to provide all necessary help to the woman’s family.

The Cyberabad Police probing the gang-rape and murder of a female veterinarian moved a court on Monday seeking custody of the four people arrested in connection with the heinous crime for interrogation.

The petition was filed in a court in Mahabubnagar district for custodial interrogation as part of further examination of the case, a senior police official told PTI. The plea is likely to come up for hearing later on Monday.

The 25-year-old veterinarian, who was raped and murdered near Hyderabad on Thursday, was forced to drink alcohol before she was smothered to death, revealed the remand report filed by the police. The document further brought to light that the accused had planned the assault in the evening itself when they saw her parking her bike near a toll booth.

The four accused, Mohammad Areef, Jollu Shiva, Jollu Naveen and Chintakunta Chennakesavulu, all aged between 20 and 26, were arrested on Friday (November 29). As per the report based on the statements of the accused persons, they had punctured one of the tyres of the victim’s bike after she parked it near the toll booth around 6:15 pm.

The victim returned around 9:15 pm after visiting a dermatologist only to find the tyre of her bike punctured, following which, the accused approached her, pretending to help her. The woman was then speaking on the phone. Three of them dragged her to a bush near the toll gate and poured whiskey in her mouth to prevent her from screaming, the report said. By then, her phone was also switched off.

The accused then stripped her clothes and raped her one by one until she started bleeding and lost her consciousness. Once she started regaining her sense, she was smothered to death. The men then wrapped her body in a blanket, dumped it onto a truck and ferried it to a place 27 kms away. They dumped the body under a bridge later, poured alcohol on it and set it afire around 2:30 am, media reports said quoting the police document.

Meanwhile, Telangana Chief Minister K Chandrashekar Rao announced that the case will be heard in a fast-track court. This is the first time, he spoke on the issue since the incident came to light on Thursday. Speaking to reporters, he said he was deeply anguished at the ghastly incident and that the fast-track court will ensure that justice is expedited.

The incident triggered a national outrage with protests erupting in front of the Shadnagar police station where the accused are lodged. Social media witnessed a flurry of hashtags demanding justice for the victim, with the public pressing for capital punishment for the accused.

The accused were on Saturday remanded to 14 days’ judicial custody. The police, however, are set to seek their custody and are mulling to file a custody petition shortly, a senior police officer was quoted as saying by news agency PTI.

The police are also seeking legal opinion on whether a case should be filed against the employees of the fuel outlet from where the accused had procured the bottle of petrol, with which they had doused the victim’s body.

“We are verifying with those working at the fuel outlet under what circumstances they filled petrol in bottle. We are seeking legal opinion and will proceed accordingly,” Cyberabad Commissioner of Police VC Sajjanar said. 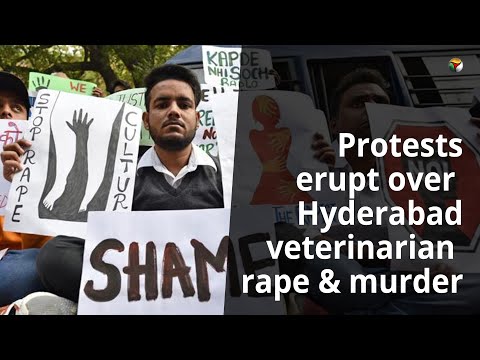 Earlier in the day, the residents of the colony where the victim stayed turned away politicians who wanted to call on her bereaved family. They locked the main gate of the colony and held aloft placards that read “No Media, No Police, No Outsiders, – No sympathy, only action, justice.”

Condemning the incident, a woman there asked why the chief minister had so far not reacted to the incident. Rao’s announcement of a fast-track hearing came hours later. Another woman sought to know why Prime Minister Narendra Modi has not yet tweeted on the incident.

Meanwhile, three policemen have been suspended for alleged delay in registering an FIR regarding the incident. They were suspended after an inquiry following allegations levelled by the family that police had cited jurisdictional reasons and not acted on time on their complaint on the missing woman, said Commissioner Sajjanar.

The Ranga Reddy Bar Association have decided not to appear for the four accused in the case. President of the Association, Mattapally Srinivas, said they had taken the decision as “a moral and social responsibility against the heinous crime committed by the accused.”