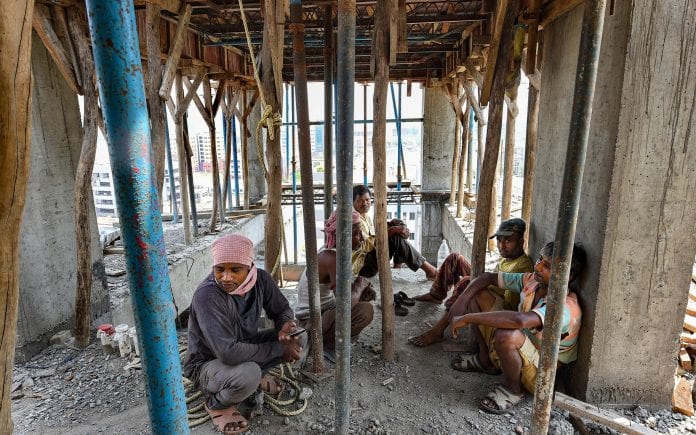 In his years of experience as a supervisor at construction sites, G Thiyagu has never found it difficult to find workers. A maistry would always be ready to work for ₹750, as per the industry standards. But now some workmen are demanding ₹950 a day. “We are even ready to offer ₹950, but we don’t get enough workers,” he says.

After the Tamil Nadu government permitted construction activities in rural areas and allowed builders to carry out pending construction works, workers have begun demanding close to ₹1,000 a day. Builders feel that the demand as arisen after 75 per cent of the workforce in major cities, including Chennai, Madurai and Coimbatore, had returned to hometowns in other districts or states.

Thiyagu says even workers, who assist maistries, are demanding at least ₹650 a day, which otherwise would be ₹400.

A few contractors told The Federal the rise in the wages was the result of the mass exodus of migrants from other states. “Most of the workers used to be from northern states and they never demanded much,” says S Ravi, a contractor in Chennai. “If we pay a fresh worker from Tamil Nadu ₹550 a day, we pay a worker from a northern state ₹300 to ₹350.”

Related News: TN yet to decide on lockdown extension despite day-long meet with experts

Wages differ from one district to another. “Even in the same district, construction workers in urban and rural areas get different wages. But due to the demand for labourers, they [workers in rural areas] may demand more money,” says R Singaravelu, the president of Tamil Nadu Construction Workers Federation.

He says around 32 lakh construction workers in Tamil Nadu had been registered with the state government’s construction workers welfare board and about 72 lakh labourers have registered with the unorganized sector workers’ welfare board. “But the number of workers [in the unorganized sector] in the state will more than a crore,” he says.

“The minimum wages were fixed years ago. It is just ₹300 to ₹500. No construction worker can survive with the money and raise his family,” he says.

On Sunday (May 31) all the labourers union to hold a meeting to discuss the crisis and to demand for an increased wages, depending upon the situation

On the other hand, builders have been struggling to retain their migrant workers to do the pending construction works. Claiming that contractors will deal with workers, S Sridharan, the chairman of the Confederation of Real Estate Developers’ Associations of India, Tamil Nadu, says builders have been looking for ways to retain labourers.

After the government allowed construction activities to resume with workers staying on our own premises, works began in some construction sites, says Sridharan. Within a week, the labourers wanted to return to their hometowns and currently around 70 per cent of them have left, he says.

Asked about the demand for a rise in wages, Sridharan says workers from Tamil Nadu cannot compensate for the workforce required for construction activities in Chennai. “There may be an increase in wages, but we do not deal with it directly. However, the new trouble is the rise in the price of raw materials for construction works,” he says.

The wholesale price of a sack of cement has shot up from ₹290 to ₹380 and the retail price had gone up to ₹430. “We have demanded the state government to intervene [in the matter]. We would get a clear picture after June 1 or June 15, depending upon the further relaxations,” he says.

Another builder in Coimbatore says he has suffered heavy losses due to the COVID-19 crisis. “When the work had begun, I had fixed a price per square metre and signed a deal [with the customer] since I had received a part of the money in advance. Nobody anticipated the crisis. Now, I have to bear the increase in wages of workers as well the rise in price of the raw materials,” he says.