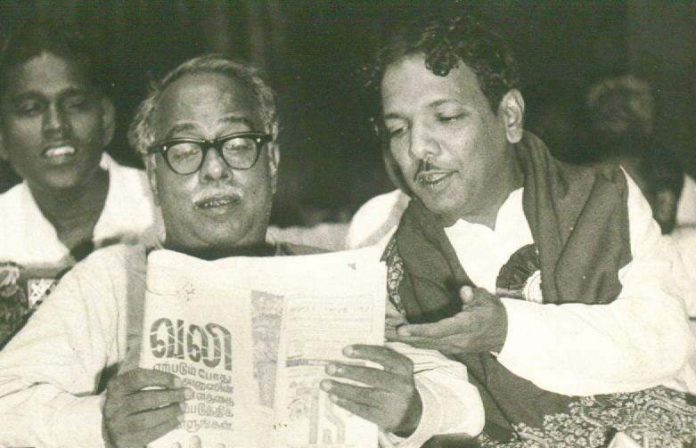 After coming to power, Stalin has been reiterating that he follows 'Anna's politics and Karunanidhi's principles.

After coming to power, the DMK government appointed high-profile, well-regarded IAS and IPS officials, who have been in the limelight at some point in their career, in key positions in the state.

Take the case of V Irai Anbu, who was made chief secretary and T Udhayachandran, who became the principal secretary to the chief minister, on the very first day the DMK had assumed office.

Shortly after, Gagandeep Singh Bedi, took charge as the Chennai Corporation Commissioner and a couple of weeks later, Supriya Sahu became the new environment secretary. C Sylendra Babu was appointed as the new DGP, and took charge from July 1.

The appointments have been received well among the people of the state, particularly among young people. All these officials mentioned are in some way or the other a role model to youngsters and barring one or two, most have a huge following on social media.

The officials are also voracious readers, good writers, orators and promote health-consciousness among people. For example, Irai Anbu, a book lover, has authored several books to motivate and encourage young people. He has inspired a generation of youth to prepare for IAS examinations through his books like ‘IAS Vetri Padikkattugal’ and ‘IAS Thervum Anugumuraiyum’.

But this is not the only reason why a large section of youth is inspired by them. Their work also speaks for them. Take Udhayachandran, for example. As Madurai district collector, he is credited for conducting the local body polls successfully in Pappapatti and Keerippatti villages, where caste Hindus had refused to accept Dalits as panchayat presidents.

Known for his genuine interest in Tamil literature, history and archaeology. It was during his tenure as the secretary of the Tamil Nadu Public Service Commission, technology was incorporated in conducting the exams.

Gagandeep Singh Bedi is known for his expertise in handling natural disasters such as tsunami, Chennai floods, etc.

Sahu, meanwhile, is famous for her efforts in banning plastic use in Nilgiris district, when she was the collector in that area. As a secretary of tourism department, Irai Anbu introduced ‘Virundhinar Potrudhum’, a programme that created awareness in the tourism industry on how to treat foreign tourists. Sylendra Babu’s efforts as part of a team to capture forest brigand Veerappan was much lauded.

But, there is a flip side to this fame as well. For example, the encounter of Mohanraj, who was allegedly involved in the double murder case of Muskan and Ritik in Coimbatore, by Sylendra Babu and his team in 2010, is considered as a serious case of human rights violations by the intelligentsia in Tamil Nadu.

Similarly, it is claimed that Irai Anbu always bagged the portfolios which did not have much political interference and hence he ended up being in the good books of all the politicians. It’s true that there are many diligent officials who carry out their duties out in a quiet manner, and stay out of the public eye.

“In politics, confidence building measures (CBM) and team building measures (TBM) are important. It is what state former chief minister CN Annadurai always followed. After coming to power, Stalin has been reiterating that he follows ‘Anna’s politics and Karunanidhi’s principles’. By placing well-known faces in key positions, he wants to build confidence among people in his government,” he added.

According to him, police and revenue are two important departments, which are the face of any government.

Moreover, Shyam added that by bringing Sylendra Babu as DGP of the state, Stalin has sent out a strong message that henceforth the police will be strict and kept in control.

“To create a confidence among people about the state’s economy and revenue, he has formed advisory councils,” he pointed out.

The appointment of these officials in key positions has ostensibly rekindled an interest among students to prepare for the UPSC exams, claimed Sathya, director of Sathya IAS Academy.

“The UPSC aspirants have started to believe that if they work hard and be honest, they too can get key positions and shine. In the last 30 years, without reading Irai Anbu’s books or without listening to Udhayachandran’s speeches, none of the aspirants from the state could have passed the UPSC and even TNPSC exams,” said Sathya.

It may sound like a tall claim but IAS aspirant-turned-journalist Saran too said that it was because of Iraianbu and Sylendra Babu that many agri graduates flocked to sit for the UPSC exams.

“Both are the alumnus of Tamil Nadu Agricultural University. Back then, people considered B.Sc. Agri as any other undergraduate course. But once these officials made a mark, the course received a lot of attention, which was equal to MBBS and BE courses. Many of the agri graduates too started appearing for UPSC exams,” he said.