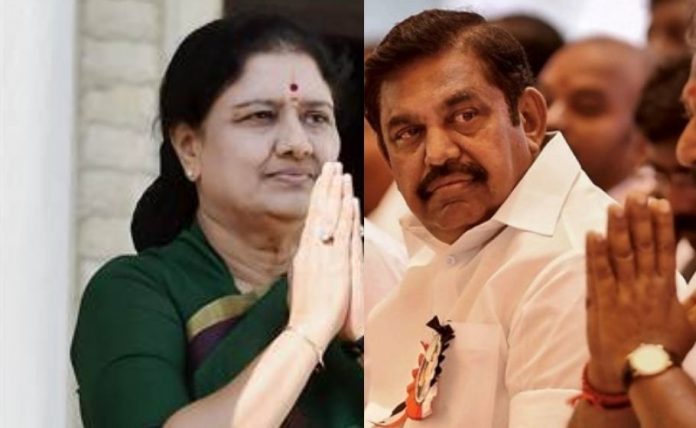 Sasikala is expected to harp on sentiments pertaining to Jayalalithaa ahead of the election to accrue political mileage over Palaniswami, whom she had installed as CM before being jailed four years ago in a disproportionate assets case. Now, expecting release next week after paying ₹10 crore fine, Sasikala is being projected as a major factor for the AIADMK.

“No chance for that. She is not in the party at all… she is not in the party. 100 per cent she will not be admitted. AIADMK is now functioning after clearly deciding on this. There is no different opinion on this,” reports quoted Palaniswami as saying during his ongoing visit to Delhi where he’s holding meetings with top BJP leadership purportedly for alliance talks.

Palaniswami, who’s is scheduled to meeting Prime Minister Narendra Modi and Union Home Minister Amit Shah during the Delhi visit, further said a memorial to Jayalalithaa would be inaugurated on January 27, which coincides with the day scheduled for Sasikala’s release.

The BJP, it was earlier reported, wants the AMMK, a party floated by Sasikala’s nephew TTV Dinakaran, to join its AIADMK-led Tamil Nadu alliance to put up an united front against the DMK and help prevent division of votes that would end up benefitting the Opposing party.

The 2021 assembly elections in Tamil Nadu, due in few months, is significant as this will be the first to be held following the deaths of two iconic state leaders, Jayalalithaa and DMK leader MK Karunanidhi, which had left a massive vacuum and leadership crisis in the state.

Sasikala used to wield massive influence in the state’s politics and could still emerge as a key player in the upcoming election if she rediscovers some of that influence, a reason that is making Palaniswami keep her away from the ruling party.

Many sense a feeling of betrayal in Sasikala against Palaniswami, whom she had installed in the top post before being jailed. Months later, Palaniswami had removed her and her family members from the party reportedly under BJP’s pressure to allow merger of the faction led by (now deputy chief minister) O Panneerselam.

The General Council of AIADMK has already endorsed Palaniswami as its chief ministerial candidate though the BJP is yet to certify this. The beginning of campaigning for an election still four months away, days ahead of Sasikala’s release, is also not being seen as a mere coincidence but a calculated step.

Markets rise in initial trade amid rally in U...

Protests in Sikkim as SC refers to Sikkimese ...