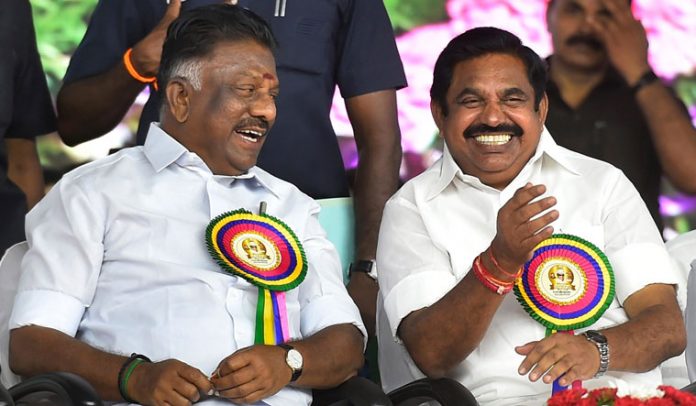 Fighting for their future – EPS (right) and OPS | Photo: PTI

Edappadi Palaniswami (EPS) and O Panneerselvam (OPS), until recently chief minister and deputy chief minister of Tamil Nadu, respectively, met Narendra Modi in New Delhi on Monday. The AIADMK leaders and fierce rivals ostensibly discussed issues related to the state with the prime minister. After the meeting, EPS and OPS thanked Modi for “campaigning for [AIADMK-BJP] alliance candidates in the [recent] assembly election” – won comprehensively by the DMK.

But according to sources, the real agenda behind the meeting was something else. Both EPS and OPS arrived in New Delhi – on separate flights – in the wake of raids on their party colleagues. Last week the Directorate of Vigilance and Anti-Corruption raided former transport minister MR Vijayabhaskar on the basis of an FIR that charged him with amassing disproportionate wealth. Also last week, the Madras High Court gave a go-ahead to an investigation against another former minister, SP Velumani, on similar charges. Interestingly, Velumani accompanied EPS and OPS to Delhi.

Although both EPS and OPS claimed that they were meeting Modi and Home Minister Amit Shah for the welfare of Tamil Nadu, there were other factors at work. Chief among them was the fear of being targeted by the BJP and the re-emergence of Sasikala, the aide of former chief minister and AIADMK leader Jayalalithaa.

OPS also had another, more personal, reason, according to sources: he wanted a cabinet berth for his son Raveendranath Kumar.

‘The BJP Has Marked Them’

V Pugazhendhi, spokesperson of the AIADMK, was expelled from the party last month, along with 16 others. He was shown the door for joining TTV Dhinakaran’s Amma Makkal Munnetra Kazhagam (AMMK) after Jayalalithaa’s death in 2016. He returned to the AIADMK in early 2020 after falling out with Dhinakaran. There is speculation that he could now join Sasikala.

Terming both EPS and OPS as ‘double comedians’, Pugazhendhi said the duo fear that central agencies could come knocking on their doors any moment.

“The BJP has marked them. They fear income tax raids. The BJP would dump its ally if it could,” he told a YouTube channel.

“If the AIADMK leaves the alliance, the people may support it again. If the BJP dumps the AIADMK, the saffron party will be seen as not supporting a corrupt regional party,” he said.

According to a source, when the two leaders boasted to the PM that the AIADMK-BJP alliance had won 75 seats without Sasikala’s help, Modi said: “Shut up.”

Also see: Why are senior AIADMK leaders making a beeline for the DMK?

“The BJP has clearly advised the two leaders that they should bring back Sasikala. The alliance will continue to suffer if she doesn’t,” the source said.

The I-T department has already served notices to 11 former ministers, he said, adding that several others are under the radar.

“There is [also] huge migration happening at the grassroots level. Many cadres are joining the DMK. The two leaders have been unable to arrest the problem. However, only OPS admits this is an issue,” the source said.

While agreeing that the AIADMK leaders met Modi to seek protection from raids, political commentator Pongalur Manikandan said long-term control of the party is a bigger concern for both of them.

“Both EPS and OPS have huge egos and that is not good for the party,” he said.

“When Jayalalithaa and Janaki Ramachandran [first woman chief minister of Tamil Nadu and third wife of MG Ramachandran] had a problem, they sought the help of then prime minister Rajiv Gandhi. So EPS and OPS are seeking the help of Modi is not a new thing. For them Modi and Amit Shah are mediators. When they have disputes they go to Delhi,” he said.

According to Manikandan, at stake is the leadership and control of the party – and it is likely that EPS will emerge as the undisputed boss within a few weeks.