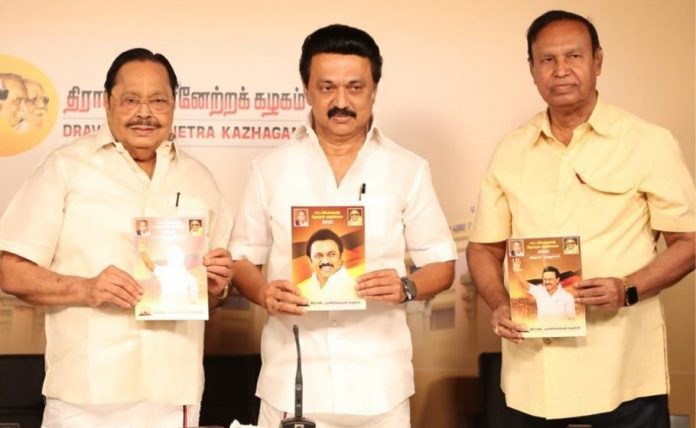 In the recently concluded state Assembly elections, the way the DMK positioned itself as the principal opponent of the BJP’s policies and as a champion of state interests had brought in rich political dividends for the DMK

In Urdu and Hindi, the word maska stands for butter. Come June 17 and 18, Prime Minister Modi will begin the process of Operation Maska – Operation Buttering – in a desperate attempt to woo the DMK leader and Tamil Nadu Chief Minister M K Stalin on his first visit to the national capital after assuming office on May 7.

Although the BJP and the DMK have been fierce opponents, and seemingly at two ends of the ideological spectrum, Modi is trying to roll out the red carpet for Stalin in the hope that the DMK would be an ally in the 2024 Lok Sabha polls. This seems to be a far cry given the political realities, but it has not stopped the BJP from trying hard.

The first part of the plan is to make Stalin feel important and convince the DMK that it can play a national role. The BJP-led government at the Centre has been systematically approaching various parties to join the NDA, by offering positions in the Union Government like ministerships. There are also options like posts of Governors, or key assignments for the relatives of the party leaders. In this case, senior DMK leader and former Union minister T R Baalu is being assiduously wooed by the BJP top brass.

What gives the BJP hope is that the DMK did tie-up with it for the 1999 Lok Sabha polls, when DMK Chief M Karunanidhi and his nephew Murasoli Maran had played a crucial role in Atal Bihari Vajpayee’s return as PM. Their relationship was further cemented when they were allies for the 2001 Assembly polls in Tamil Nadu. After the DMK’s defeat in that election, the party made a retreat from the pro-BJP position and returned to a secular plank in 2004 Lok Sabha polls, when the AIADMK-BJP alliance was wiped out in the State.  The DMK has stood on the side of secularism ever since.

In 1999, the DMK cosied up to the BJP for two reasons – the DMK had prevented the AIADMK from being part of the Union government, which would enable J Jayalalithaa to try and wriggle out of corruption cases against her and the members of the Sasikala family.

Second, the BJP dangled the post of Union ministership before Maran, and he fell for it. In order to accommodate his nephew in the Union cabinet, Karunanidhi paid a heavy price by entering into an electoral alliance with the saffron party, which had disastrous consequences for the party in the state. Jayalalithaa grabbed the secular parties, given up by the DMK, and stormed back to power in 2001. Karunanidhi learnt the lesson at a huge price.

Stalin is very much aware of the game that is being played by Modi to ensnare the DMK, and is acutely conscious of the 2001 debacle in the company of the BJP. Getting close to the BJP would mean jettisoning the secular parties like the Congress and the Left, the alliance with whom has provided the DMK a triple victory over the AIADMK in three successive elections.

The DMK lead of around six per cent over the AIADMK has been possible largely due to the support of the secular parties, and a consolidation of the minority vote in favour of the DMK-led alliance in Tamil Nadu. In almost every Assembly constituency in Tamil Nadu in the 2021 elections, the DMK-led combine began the counting process with at least 10,000 votes already in the kitty from the minority vote-bank.

This was a disadvantage which the AIADMK could not overcome. The DMK realises that the fate of the AIADMK would befall the DMK too if it committed the same political folly as the AIADMK.

Yet, the BJP top leadership plans to impress upon the DMK leadership the need to tie up with the NDA to ensure ”speedy development” of Tamil Nadu and that the DMK could benefit by having posts of Union ministerships. There is also the silent weapon that the PMO wields of action against the top leaders of various parties if they go against the BJP, and how on the other hand they can receive patronage and protection. It was the last factor that clinched the deal with the AIADMK, although the first part too kept the AIADMK interested.

Stalin is averse to a political relationship with the BJP, especially since the DMK had positioned the BJP’s policies on various issues regarding the state as inimical to the people’s interests. His electoral campaign was largely targeted at the BJP. The main charge that he levied against the AIADMK was that it was subservient to the BJP, and had sacrificed the interests of the State. The DMK-led front had already bagged 38 of the 39 Lok Sabha seats in the state. The way the DMK positioned itself as the principal opponent of the BJP’s policies and as a champion of state interests had brought in rich political dividends for the DMK.

History has a knack of repeating itself. In the period from 2001 to 2003, both the DMK and the AIADMK were being wooed by the BJP. Technically, the DMK was an ally of the BJP, but the BJP also nurtured a close relationship with the AIADMK. Under Modi too, the BJP would like to keep both the DMK and AIADMK happy, at least for the time being.

The BJP is aware that its numbers in 2024 may drop in several crucial states like UP, Bihar and Maharashtra, and is therefore looking at improving its tally in the south to compensate for the loss. Therefore, it is attaching a lot of importance to Stalin’s stint as Chief Minister of Tamil Nadu. Part of the BJP plan is to strengthen government-to-government relationship with Stalin and the DMK government in Tamil Nadu. The idea is to get the state ministers to interact often with the Union ministers and thus soften them. The next stage would be the difficult one to get the DMK to join the NDA bandwagon.

If this does not work, it will work on Plan B – get the DMK to cut its ties with the Congress, prevent the Congress from getting a good number of LS seats from Tamil Nadu, persuade the DMK to abandon its secular allies including the Congress and the Left and contest on its own in 2024 LS polls and then hope for a post-poll adjustment. At the moment, it is wishful thinking that is guiding Modi. The DMK government may play ball only insofar as government-to-government co-operation is concerned, and keep away from political overtures.