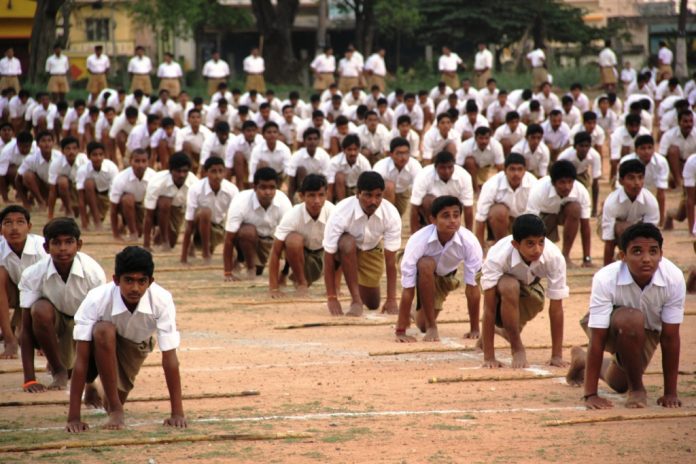 The recent manhandling of a senior police official by RSS workers in Coimbatore has drawn attention to the special camps held by the Hindutva organisation in schools, with an eye on luring young boys into its fold.

Deputy commissioner of police (Coimbatore city north) T Jayachandran who had gone to a private school in Vilankurichi in Coimbatore on December 31 was stopped from entering the premises and he and other police personnel were manhandled by RSS workers. A video of the incident went viral on social media.

It is no secret that the Rashtriya Swayamsevak Sangh or RSS holds camps in private Hindu schools across the country. In Tamil Nadu too, many such camps are held in schools, targeting young school boys.

How are these camps organised? RSS, which has cadreship in every district and even block of Tamil Nadu, uses these ‘pracharaks’ to identify a school, particularly a Hindu school, with names like ‘Venkateshwara’, ‘Ramakrishna’, ‘Vivekananda’, etc.

They approach the schools saying that they wish to conduct a two-day or a week-long camp in which students are taught yoga, martial arts, moral classes, etc. They tell the management that the expenses for the food and other activities will be borne by the RSS, and they only need a place to hold the camp.

While the school managements agree to the camps, believing in these superficial claims, the boy students of the school, in classes 6–9, are mandated to attend the camp. Moreover, the camp is not restricted to just the school boys, but those from other schools and nearby areas too.

A typical day in the camp starts with surya namaskar (sun worship) being taught and practised. It is followed by some physical exercises in the way of games. The games mostly have some kind of hurdles, which students need to overcome, like crawling under benches, crossing a human wall and reaching the end line.

These games are conducted in a manner and pace as though a war is being waged against the students. At the end of the game, the students are asked to raise the slogan ‘Bharat Mata ki Jai’.

Also read: Only those who are weak are exploited: RSS chief Mohan Bhagwat

After breakfast (which of course is vegetarian food), chief guests — who are mostly higher rung leaders in the RSS — give a lecture about Indian history or on the lives of icons such as Bhagat Singh, Subash Chandra Bose.

After lunch, stories from Indian epics like Ramayana and Mahabharatha are shared. Talks are also held on Hinduism and Partition. Students are taught Sanskrit shlokas.

In the evening, the students are given basic training in martial arts like Silambam (a traditional sport in Tamil Nadu), which RSS call ‘Dhanda’ and free hand combat like kalaripayattu and karate, which they call ‘Niyuddha’. At night, students are taught to play the flute, a programme called ‘Vamshi’.

“We call the camp as ‘Panbu Payirchi Mugaam’ (Character Training Camp). The day starts at 5 am and ends at 10 pm. The day goes according to proper schedule. Students mainly learn about time management. Then we teach yoga, silambam and march past in the morning, followed by story telling and group discussions on patriotism,” said Gopalakrishnan, Vibhag Karyavah, RSS Chennai chapter.

What happens in these camps is not a big secret. But parents of children are often oblivious of the intent and the people behind it.

The teen age is a time when children start to look for role models, mostly film stars. This is also the age, attraction towards the opposite gender starts. By associating with this mentality, the RSS is able to capture the minds of the children.

To tap this, RSS cadres start visiting the school where the camp is held, twice in a week, mostly on Mondays and Fridays. After school hours, the students are further taught dhanda, niyuddha and vamshi. They also train them in ‘march past’.

When the teenagers are exposed to such activities, especially when it spirits them up in front of girls, they are easily lured into the ideology and keep coming back, and start attending ‘shakas’. The shakhas end with the RSS prayer song ‘Namaste Sada Vatsale’.

Slowly the students are cajoled to wear khaki pants and black shoes. Students who attend the shakhas regularly are taken for state-level camps, where they are provided a full RSS uniform set and a dhanda (Silambam stick).

They are then introduced to RSS literature. In Tamil, a work titled Endru Kaanbom Engal Sindhuvai (When will we see our Sindhu?) describes the Partition violence in graphic detail. The novels published by RSS are written in a way that the children develop a grudge against Muslims.

However, these camps have run into opposition from organisations like Thanthai Periyar Dravidar Kazhagam and Naam Tamilar Katchi which stage demonstrations in front of the school campuses, alleging that these camps corrupt the children’s minds and the secularism ethos of the country.

They feel that until students attain a certain age and develop their own political leanings, it would be difficult for them to really understand the true intent and ideology of the RSS.

Kovai Ramakrishnan, chief of Thanthai Periyar Dravidar Kazhagam, said the RSS and BJP are not attracting the young by telling their principles or achievements. Instead, they inculcate hatred among the students.

“The schools which are religious encourages such camps. Also by leaning to right, they think they can get some help from the Centre in running the school. As far as Coimbatore is concerned, some of the RSS and BJP workers get into the management committees of some educational institutions run by Kongu Vellalar community, Malayala Samaj, etc and push their agenda,” he said.

Santhosh Nair, secretary of the private school where the DCP was manhandled, said since the RSS is not a banned organisation, there is nothing wrong in allowing them to conduct camps in the school.

“In the camps, various Tamil ancient literature are introduced to the students. They are also taught yoga and meditation and get rid of negative thoughts, since of late, many students are taking extreme steps to end their life due to various reasons. The students took part in the camps purely on their own volition. We are conducting the camps from 2018,” he said.