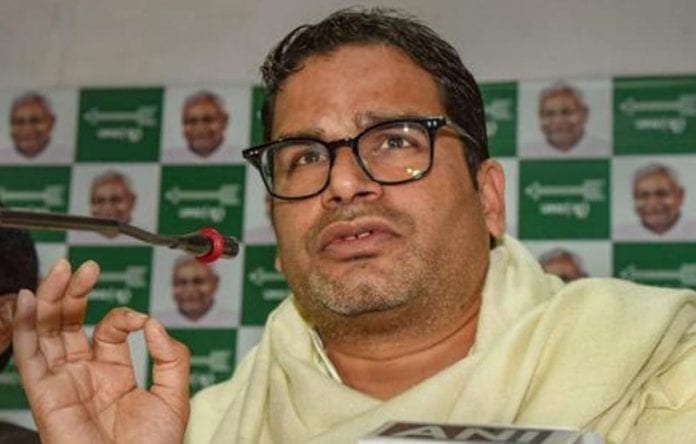 Ahead of the 2021 assembly elections in Tamil Nadu, the DMK has roped in political strategist Prashant Kishor’s Indian Political Action Committee (I-PAC), following the resignation of its chief strategist Sunil Kanugolu.

Talks between the DMK and Kishor turned fruitful after party chief MK Stalin met him in Chennai on Monday, a senior party leader told The Federal. I-PAC had earlier designed election campaigns for Prime Minister Narendra Modi during the 2014 Lok Sabha elections and YS Jagan Mohan Reddy during 2019 assembly polls in Andhra Pradesh.

Sunil was the brain behind Stalin’s Namakku Naame rally during the last assembly polls in 2016. Though the party failed to return to power, it became the strongest opposition in the assembly. Last Lok Sabha elections, the party managed to bag victory in 38 of the 39 constituencies in the state.

Sunil had left the party over a difference in opinion with the party leadership, the senior leader said. This issue was raised after Stalin was embarrassed as he couldn’t furnish the parent document of the Murasoli (party’s mouthpiece) office land to prove that it was not built on Panchami land.

“We were pushed to the situation only because Stalin tweeted praising the ‘Asuran’ film which talked about Panchami land. Apparently, the tweet came on Sunil’s recommendation,” the senior leader said. “But, talks were on with Kishor for quite some time. It started in 2017 and was kept in abeyance for a while. It resumed recently in view of the 2021 polls.”

After facing a debacle in the Lok Sabha polls, even the ruling AIADMK tried to rope in I-PAC in view of the assembly elections. However, even after a couple of meetings in Chennai and New Delhi, the talks did not turn fruitful. Besides, actor-turned-politician Kamal Haasan too had held talks with Kishor.

Will I-PAC make a difference?

Political analysts in the state feel Kishor’s past success stories might not work in Tamil Nadu. According to political analyst VC Chandra Bharathi, Kishor and other political strategists see Tamil Nadu’s demography in numbers. “And it’s not just numbers, but something more than that,” he said.

To justify his opinion, he draws an example of the recent wall collapse incident in Mettupalayam, in which 17 people died. “It was purely an accident, but the victims being Dalits, it took a political turn and politicians from different parties are now making a beeline to the village.

“The victims belonged to a marginal Scheduled Caste community and the visit of politicians would send out a larger message among the Dalit community across the state. Strategists like Kishor would not understand this. But (Chief Minister) Edappadi K Palaniswami, being a seasoned politician, has understood it,” he said.

Chandra Bharathi felt that social engineering would help to an extent, but that alone would not be enough to steer a party to success.

“Tamil Nadu is a state where 70% of the population are educated. And still, it made leaders out of cine stars, something that is quite impossible in other states. Even those people, including former chief ministers MG Ramachandran and J Jayalalithaa, were accepted only because they spoke actual politics,” he said.

Another political activist, Ravindran Duraisamy, said Kishor would not be able to understand the sentiments of the people in Tamil Nadu, since he belongs to an upper caste. “Caste is ingrained in our system and the DMK is known for its anti-caste stance. So, for Kishor, who himself hails from a so-called upper caste, it would not be easy for him to drive a successful campaign here,” he felt.

Also read |  When all else fails, politicians dial strategists for help

The party’s district-level functionaries were also seen anxious over the move and claimed their leadership don’t listen to them.

“Even when Sunil was there, the party seniors didn’t listen to us. Instead, they made decisions based on reports and recommendations of agencies. Even the district secretaries were changed based on such recommendations. Now it would be even worse if Kishor’s team takes full charge as he may change the structure of the party completely,” said a district-level functionary in a southern district on the condition of anonymity.