A clash erupted between protesters and police at Mettupalayam in Tamil Nadu’s Coimbatore district, as activists alleged that the wall which collapsed causing the death of 17 people on Monday, was built to keep away lower caste people.

The wall was built by the proprietor of a textile shop surrounding his home, said Parthiban, a member of Movement Against Imperialism.

“On the front side of the house, the wall is only 4 to 5 feet. But on the sides, the height of the wall is more than 20 feet. The families of the deceased live near the wall. They have been there for more than 40 years. The side walls were not maintained properly like those in the front,” he alleged. 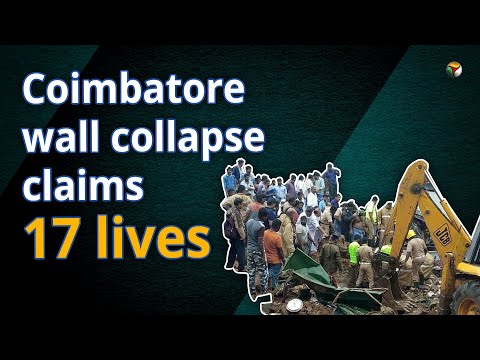 Covai Ravikumar, general secretary, Aathi Tamilar Peravai, said that the families residing near the wall are of Arundathiyar caste and they are living in the land given by the state government.

The owner of the textile shop is from Mudaliar caste and he had apparently bought the land from Kannappan Gounder and built the compound wall as a kind of fence in one acre radius, surrounding his house, claimed Pandian, founder, ‘Caste Matters Urgent’, an organisation working towards rights of the Dalits.

“As far as 1998 itself, we opposed the building of the wall, since it had an untouchability nature. The Gounders and Naidus live on one side and the Arundathiyars on the other side. The proprietor of the textile shop built the wall to avoid Arundathiyars crossing his home. We complained to the authorities, but no action was taken then,” Ravikumar claimed.

The place where the collapse happened is called Nadur. About 150 Arundathiyar families are residing there.

The wall was built using basalt rocks (Karungal in Tamil). The collapse took place at 4.30 am and against at 5 am.

“We were protesting in a peaceful way near the government hospital. But the police threatened some of the relatives of the deceased and tried to get the signatures (for taking the bodies) through coercive methods,” Ravikumar alleged.

He demanded that the textile proprietor should be arrested under the SC/ST Act and the solatium to the deceased should be increased from ₹4 lakh to ₹25 lakh each to the deceased’s families, otherwise, they would not take the bodies.

He also demanded that the kin of the dead should be given a government job and all the Arundathiyars in the region where the collapse took place should be given houses through slum clearance board.

“The police filed a case under IPC section 304A for causing death by negligence. It is the state’s duty to protect activists who are fighting against caste discriminations under Article 15. But the police instead of standing by the victims, brutally attacked the protesters,” alleged Pandian.

Condemning the attacks on the protesters, Kathir, founder, Evidence, an organisation working for the welfare of the Dalits, termed the police attack as ‘state terrorism’.

“The state human rights commission should take action against these attacks. The state should take responsibility for these deaths,” he said.