The Dravida Munnetra Kazhagam (DMK) and its allies conducted a rally in Chennai on Monday (December 23) against the amended Citizenship Act and warned the government that they would intensify agitation by mobilising apolitical sections of society until the Centre withdrew the law.

DMK president MK Stalin, along with leaders of allies, including senior Congress leader P Chidambaram, MDMK chief Vaiko and state unit leaders of Left parties marched from downtown Egmore to the Rajarathinam Stadium, a distance of about two km.

While Stalin, Chidambaram and other leaders held placards against the CAA, cadres of DMK and their allies raised slogans against the contentious act and waved their respective party flags as they marched through the area.

The DMK chief, flanked by Chidambaram and other leaders on the dais, said the opposition to CAA will not stop with today’s agitation. The protests will be taken forward after consulting allies and by mobilising apolitical sections of the society till such time the Centre withdrew the “draconian,” legislation, he said. 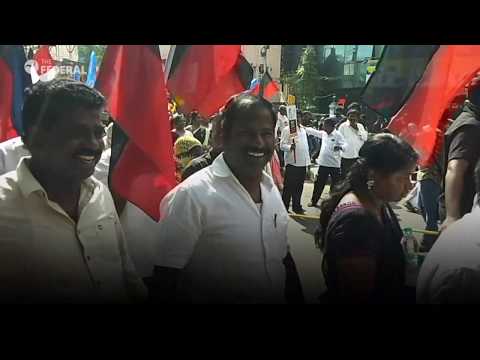 Elaborate security arrangements, including the deployment of drones, are in place and about 5,000 police personnel are on security duty, police said.

Earlier, the Madras High Court held a special session on Sunday (December 22) night to hear a plea filed by R Varaaki of the Indian Makkal Mandram movement seeking a ban on the DMK rally.

The High Court bench, comprising Justices S Vaidyanathan and PT Asha, passed an order directing the police to videograph the procession if it took place despite the denial of permission by the police.

DMK leader MK Stalin took a dig at the ruling All India Anna Dravida Munnetra Kazhagam (AIADMK) government and said that the AIADMK has given free publicity for the DMK rally by asking their own party members to seek a ban on the rally by the court.

Earlier, the police had said that the DMK had filed an application on December 18 seeking permission. The police, in return, had asked for information regarding the number of people participating in the rally, names of the participants, and who was going to take responsibility in case of untoward incidents.

The DMK had replied vaguely to the police, saying this was not applicable to the current scenario. “The evasive manner in which a responsible political party has answered raises doubt in our minds that leaders, who are spearheading the agitation, are reluctant to take responsibility in the event of any damage to public property or untoward incident,” the bench observed in its order.

However, the court also declared that in a democratic country, a peaceful demonstration could not be prevented since it was the backbone of a democratic set-up.

V Jayaprakash Narayanan, speaking on behalf of the state government, said that the government and the police would take adequate measures to ensure law and order if the rally took place.

The DMK has been maintaining that the law was anti-Muslim and Sri Lankan Tamils.

Meanwhile, Chief Minister Edappadi K Palaniswami appealed to the Muslims to not believe “rumours” on the CAA.

“Even though there will not be any problems for the citizens of India, few are constantly spreading ‘rumours’ among the Muslims that their citizenship would be cancelled. It is completely false,” he said in a statement.

He further said that his party MPs pushed for twin citizenship for Sri Lankan refugees in Tamil Nadu when the bill was tabled in both houses of the Parliament.

“When I recently visited New Delhi, I also pressed for citizenship for the Sri Lankan refugees with Prime Minister Narendra Modi and Union Home Minister Amit Shah,” he said.

Claiming that the state government was working for the welfare, development and protection of all people in the state including minorities, he appealed to the people to not pay heed to false campaigning and remain calm.

He also asked citizens to not spread rumours that would stir tension and disrupt public peace.