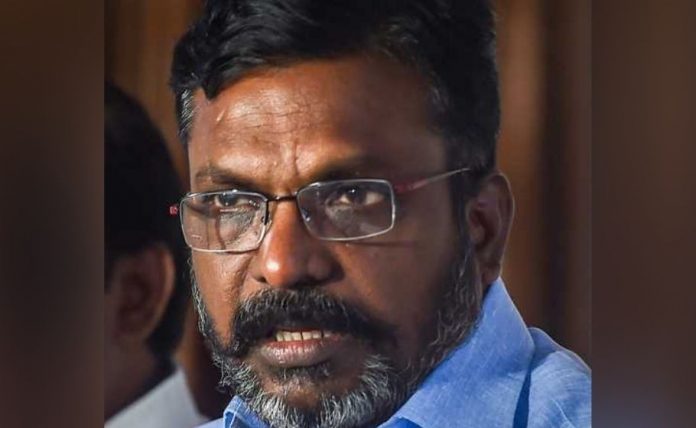 Thol Thirumavalavan said that the VCK was protesting against the bureaucracy and not against the DMK-led government. Pic: PTI

Is the DMK government anti-Dalit? This is the impression that is gaining ground after the derogatory remarks being made by many DMK leaders against Dalits for some time now. Be it party’s Rajya Sabha MP RS Bharathi’s dig against Dalit judges or Lok Sabha MP Dayanidhi Maran’s remark against the then chief secretary K Shanmugam.

The situation gets sticky for DMK’s ally VCK, who has been reportedly pushed to support these leaders instead of opposing them and ends up having to face the brickbats from the party’s supporters.

It is not just the party leaders, the DMK-led government too seems to be displaying anti- Dalit behaviour. Recently, the state had announced that it will build a memorial for 21 Vanniyar ‘martyrs’ who had died in the 1987 reservation protests. Earlier in July this year, the government had okayed 10.5 per cent sub-quota for Vanniyars.

Many people view this kind of support for the Vanniyars as an attack on Dalits and the VCK. Moreover, the VCK, a party for Dalits which should have opposed these moves, has remained a mute spectator instead.

It is in this backdrop, police action against VCK cadres happened at K Morur, a suburb in Salem district during a pole installation for the party flag on September 23.

The VCK party cadres were angry and tempers were flying high because the police prevented them from installing the pole citing law and order issues. The verbal war between the police and the cadres eventually ended in fisticuffs. While the cadres allegedly threw stones at the police, the latter resorted to a lathi-charge. A total of 15 cadres were detained.

After this incident, party chief Thol Thirumavalavan issued a call for protests to be held in Chennai, Salem and Madurai. While spearheading a protest in front of the Chennai Collectorate on September 28, he said whether it is the AIADMK or DMK in power, it is the VCK which gets beaten up by the police.

Thirumavalavan said that the police have an ‘anti-Dalit’ mentality. “This protest is against the bureaucracy and not against the government. The police have a casteist approach towards our party. Certainly, we will take this issue to Chief Minister Stalin,” he said, adding that there is no threat however to the alliance with the DMK. Incidentally, the police department comes under the direct control of Stalin.

On September 29, Thirumavalavan issued a statement stating that since Stalin has promised to hold talks with them on this issue, the protests planned in the other two cities have been postponed.

Did VCK violate any rules?

Pongalur Manikandan, a political commentator however observed that VCK’s protests were against the spirit of the ethics of alliances.

According to Manikandan, the revenue department had ordered that new flagpoles will not be installed in places where other flagpoles already exist.

“If one wants to install a new flagpole in a new place, they have to get prior permission from the revenue and police departments. These rules have been in force for the past few years. Even permission to reinstall flagpoles which were uninstalled during the elections has been denied in some areas,” he said, adding that in this situation VCK’s attempts to violate the rules is condemnable.

“Just by installing flagpoles, the Dalits are not going to get anything. Instead Thirumavalavan should have talks with Stalin and get what he wants,” Manikandan added.

However, VCK’s state spokesperson Vanni Arasu questioned how flagpoles of other parties were allowed if there is such a rule?

“We generally seek prior permission with the police to install a flagpole. There is no need to get permission from the revenue department. They said no permission will be granted to install new flagpoles. If that is the case, then how come DMK, AIADMK, PMK and even actor Vijay’s party flagpoles have been allowed?” he asked.

Further, Arasu pointed out that the official who had ordered the lathi-charge was M Sree Abhinav, currently the SP of Salem. He was the same official who had transferred three constables since they garlanded Periyar statue, when he was the SP in Cuddalore district, said Arasu.

In every regime, more than anything, it is the police force who is the face and identity of good governance. “When the police earn a bad name, it damages the goodwill of the state government,” pointed out Se Ku Tamilarasan, president, Republic Party of India.

“Not only in the police department, but the ‘anti-Dalit’ mindset is spread across all the departments. When the society itself has not gotten rid of the caste system, it is meaningless to expect that the law will be equal for all. After 75 years of Independence, the departments like the police still harbour casteist attitudes. We cannot say that there is no truth in Thirumavalavan’s allegation. But we need to check on what basis he makes that allegation,” he added.

Speaking to The Federal, Dr Constantine Ravindran, one of the DMK spokespersons, said police atrocities are remnants of the AIADMK’s regime.

“For a decade or so, the DMK was not in power. The 2019-2020 National Crime Records Bureau data reveals that police atrocities against the Dalits have increased in the state. It must be due to the outcome of the AIADMK’s regime. This is a stray incident which is happening in one or two places. After we came to power there have been no such atrocities,” he said.

However, he added that if a leader like Thirumavalavan was upset there must be a real issue. The party will look into the allegation and take necessary actions, he added.