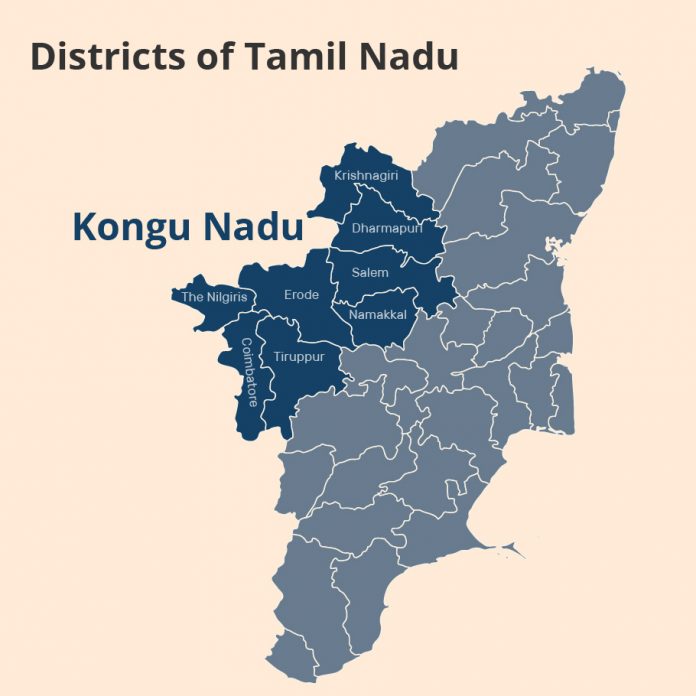 In the coming months, it will be interesting to see the battle unfolds between DMK and BJP to get a stronger foothold in the western region. And, what the AIADMK will do to fight them off to retain their stranglehold over the region

The DMK and BJP are gearing up to woo the western districts of Tamil Nadu. After both parties failed to make a significant dent in this region in the 2021 assembly elections, they are now eyeing the same seats in the western districts, and each is working in their own way to strengthen their foothold in this key region.

While the BJP is handing out key posts of Union ministers as well as that of the state party president to people who have joined the party exactly a year back, DMK on the other hand, is trying to win over party leaders from other parties who wield a powerful influence in the western districts. The DMK, in fact, had hit a stonewall and had failed to win even a single seat in Coimbatore district in the 2021 assembly elections.

Welcoming R Mahendran, the former vice-president of Makkal Needhi Maiam to the party, Chief Minister and DMK M K Stalin said Mahendran should have joined the DMK before the elections, as it would have helped the party win a few seats in the western region.

“Though we won and came back to power in the assembly elections, DMK did not perform as expected in the western region, which is a concern to me even now. Mahendran will take care of it now,” said Stalin.

Stalin’s statement showed that he is extremely upset with his party leaders from the western region and is willing to welcome leaders from other parties provided they are tall  leaders and have the will to strengthen the DMK.

Clearly, the DMK has been just waiting for a right person to assume charge of the party in the region. Though, there are several DMK leaders in the region who even went on to even become ministers in the past. But, they have not been able to defeat the AIADMK candidates and this has worked against them in the eyes of Stalin.

Mahendran unsuccessfully contested from Singanallur constituency polling a total of 36,855 votes and in the 2019 parliamentary elections, Mahendran got more than a lakh votes from the Coimbatore constituency.

The BJP too is eyeing the votes in the western districts, as the high command has favoured two leaders of the party, who hail from the western districts with plum posts. K Annamalai, a former IPS officer, has been appointed Tamil Nadu BJP president. A native of Karur district, Annamalai, who had joined the party only in August last year, lost the 2021 assembly elections contesting from Aravakurichi constituency.

Also read: Is TN CM Stalin on a PR drive?

Similarly, the outgoing BJP president of the party, L Murugan, has been made minister of state in the Union government. Murugan, a native of Namakkal district, lost the election contesting from Dharapuram constituency, nevertheless he has been made a Union minister. Out of the 4 seats which BJP won, 2 are in the western region and 2 are in the far south of the state.

AIADMK, which is currently the favoured party in the western region, having won nearly 32 seats out of the 54 seats in this assembly election, must not get complacent and rest on their laurels. They know they have to keep the voters happy lest they lose their numero uno position to either the DMK or BJP.

Converting the assembly seats into Lok Sabha seats, National Democratic Alliance (NDA) is at least way ahead of DMK, especially in the Lok Sabha seats of Coimbatore, Pollachi, Nilgiris and Tirupur. Thus, there is a view among political observers that the appointments made by BJP has been done with an eye to strengthen its position in these 4 seats.

In the coming months, it will be interesting to see the battle unfolds between DMK and BJP to get a stronger foothold in the western region. And, importantly, what the AIADMK will do to fight them off to retain their stranglehold over the region.

Behind BJP’s decision to choose Bommai as Karnataka CM