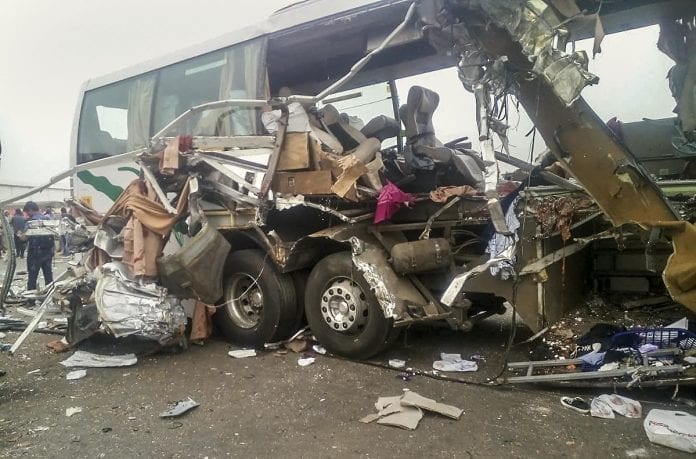 Out of the 48 passengers on the bus, 20 were killed, a few are feared to be trapped in the debris, and at least 20 people have been injured. “The injured have been admitted to hospitals in Tirupur, while some have been referred to Coimbatore. Most of the deceased have been identified,” Palakkad Superintendent of Police Siva Vikram said.

The bus was going to Thiruvananthapuram from Bengaluru, while the lorry was coming from the opposite direction on the Coimbatore-Salem Highway when the mishap occurred at 4.30 am, police said.

Reports said the tyre of the truck burst when the truck was travelling at high speed, and the container got detached from the vehicle before rolling on the road and hitting the bus.

“It was a high speed collision. The container lorry lost control. We do not know if the driver dozed off or the tyre burst. The lorry entered the wrong lane and crashed into the KSRTC bus coming in the opposite direction,” Vikram said.

Police said the driver of the truck that was coming from Coimbatore has fled the spot.

Condoling the death of the victims, Kerala Chief Minister Pinarayi Vijayan’s office said, “All possible relief measures will be taken in cooperation with the government of Tamil Nadu and the District Collector of Tirupur.”

Talking to reporters, Vijayan said, “Chief Secretary is coordinating all proceedings. Transport Minister AK Saseendran and Agriculture Minister VS Sunilkumar will be going to Tirupur. We have spoken to Tamil Nadu government. They will provide all the assistance and coordinate proceedings. All necessary arrangements have been made for providing medical help and also to identify bodies of all the deceased. If needed, a medical team will go from here.”

Prime Minister Narendra Modi expressed anguish over the death of at least 20 people in a road accident in Tamil Nadu and hoped the injured recover soon. “Extremely anguished by the bus accident… In this hour of grief, my thoughts and prayers are with the bereaved families. I hope those who are injured recover at the earliest,” the Prime Minister’s Office said in a tweet quoting Modi.

Extremely anguished by the bus accident in Tamil Nadu’s Tiruppur district. In this hour of grief, my thoughts and prayers are with the bereaved families. I hope those who are injured recover at the earliest: PM @narendramodi

Karishma, who was on her way to Ernakulam, said she was seated on the left side of the bus and was sleeping when the accident occurred.

“When I woke up suddenly, I saw many people running around and the injured being taken in ambulances,” the shocked woman told media. Alan, also from Kerala, said he was still finding it difficult to get over the shock. “I have sustained a minor injury on my leg. But my friend has a nose injury and I am taking him to hospital,” he said.

Jemin George, an injured passenger, said he suffered a cut on his lips and an injury on the forehead that required 10 stitches. “I didn’t know what exactly happened. I was sleeping in a seat behind the driver’s seat,” he said, adding, he was referred to a hospital in Coimbatore.

A weeping woman said the lorry’s container had been overloaded and that there were not many vehicles on the road when the incident took place. She added that the right side of the bus was fully damaged.

(With input from agencies)