The people of Puducherry have woken up to the fact that they have make a mistake by voting for the NR Congress party, said V Vaithilingam, Lok Sabha MP representing Puducherry

V Vaithilingam, Congress Lok Sabha MP, is often referred to as ‘The Lone Wolf’. The two-time Chief Minister of Puducherry is not only at the forefront of the opposition against the Centre, but he also raises his voice against the NR Congress government over the problems facing the Union territory.

Born in Cuddalore in the erstwhile Madras Presidency and now a district in Tamil Nadu bordering the UT, Venkatasubha Reddiar Vaithilingam was raised in Puducherry. His father V Venkatashuba Reddiar also served as the second CM of the UT. 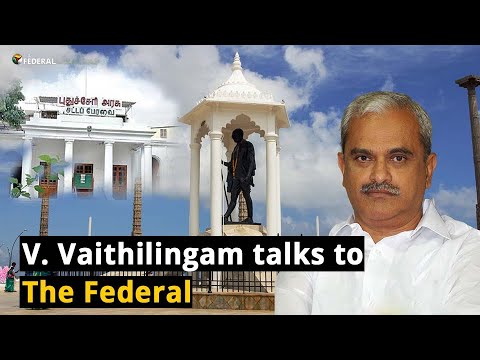 With this political lineage behind him, Vaithilingam stepped into state politics at the age of 30. By 35, he was public works and power minister and at 40, he became the CM. This was around the time (1991-1996), when India was slowly embracing new economic policies and Vaithilingam too, wanted to go with the flow.

When he was at the helm of affairs in the Puducherry government, his priorities were to minimise the budget deficit and increase private participation. Vaithilingam is not only seen as an able administrator but also as a leader who held the party together in spite of inner-party rivalries. He was also Speaker in the Assembly in 2016 and resigned from the post when he became the MP of the Lower House in 2019.

In an exclusive interview with The Federal, Vaithilingam shared his view on the one-year rule of the NR Congress-led government. Basically, he believes voters have woken up to the fact that they have made a mistake by voting for the NR Congress party.

“We don’t think the people of Puducherry lost faith in the Congress. They just decided to give an opportunity to the NR Congress, since they are in an alliance with the BJP and believed something good would happen to Puducherry. But, now, they realise it was a wrong decision,” he said.

Besides his scathing criticism of the ruling party in Puducherry, Vaithilingam has also shared his dreams for the UT and about strengthening his party at the ground level.

How will you evaluate the past one year of the NR Congress government?

‘BEST Pondicherry’. This was not only the slogan of Prime Minister Narendra Modi but eventually became the poll promise of the NR Congress-AIADMK- BJP alliance. The objective behind the acronym ‘BEST’ was to make Puducherry, a centre for business, education, spiritual, and tourism.

During the election, the Union finance minister, Union home minister and many senior parliamentary leaders came down to the UT and claimed they will create a separate finance commission Puducherry, just like the one they promised for Jammu and Kashmir. But when I raised this question in Parliament, the answer was negative.

The alliance even promised to establish one Kendriya Vidyalaya school in each of the Assembly constituencies. But in reality, the current disposition is unable to appoint even a school headmaster. The CM has become the puppet of the Union government. The people here believed that Rangasamy would stand up against the Union government but he too turned out to be completely subservient to the BJP.

The Congress government always had a strained relationship with the then Lieutenant Governor Kiran Bedi. Has anything changed in this BJP-led alliance?

The Governor’s role should be that he or she should act as a bridge between the state and the Union government. When the Congress was in power, Bedi acted like a dictator. She was the sole reason why we lost the elections. Despite supporting the BJP, she was dismissed by the Union government. They did not even seek a resignation.

People assumed that things will change after the new Governor took charge. But she acts like her only duty as a Governor is to sign documents. For instance, PM Modi inaugurated two buildings – Kamarajar Manimandapam and Municipal Corporation building – in January this year. Even after five months, they are still not being used.

Similarly, a rural road project worth ₹100 crores was sanctioned in 2019-2020 and it is still not utilised fully and the road works are stalled. Reportedly, when legislators question the status of these developmental projects, she brushes it off saying that she has signed the papers and has no idea about the rest.

If ‘BEST Pondicherry’ is the slogan of Modi, Amit Shah’s slogan is ‘Beautiful Pondicherry’. He stated that Puducherry will have a Smart City project. The state will contribute 60 per cent and the remaining is to be given by the Union government. But that project too is incomplete.

The local bodies’ election too has not been conducted until now. It was stalled because of the OBC reservation. But to date, the government hasn’t set up a committee to conduct a caste-wise study. Moreover, the government has not tabled the budget even after one month of the beginning of the new financial year. The ration shops that were closed during Bedi’s term have not reopened. Even the rice given to people during the pandemic was distributed from schools. Converting schools into ration shops is the only major achievement they did.

Also read: Why the lack of grassroots democracy is hurting the people of Puducherry

The government, however, is boasting about its effective handling of the COVID-19 pandemic?

Puducherry became COVID-19 free because of nature’s mercy and not by the government’s efforts. In fact, when the new government came to power in May 2021, we saw more than 900 deaths in that month alone. The number was high when compared to all the deaths that happened that year. When the ruling party came to power, they were busy – fighting for portfolios and did not even form the government. In proportion to the population of Puducherry, the UT has seen a high number of deaths.

Have you taken any steps to build a rapport with the current Lt Governor?

No. We have decided not to meet her. It is simply because there is no use.

As you know, the culture of Puducherry is very different from Tamil Nadu. It is a culture, in which no one is particularly possessive about their religion. It is a land which helps to develop one’s spirituality and not religion per se. Here, people give more importance to education and employment. That is why they have voted for this alliance. It is impossible to give a communal colour to this decision.

I agree that instances like singing the National Song (Bande Mataram) instead of National Anthem (he refers to a recent function attended by Amit Shah) are happening here. But that doesn’t mean the people here can be divided on a communal basis easily. If the BJP is thinking on those lines, they are going to bite the dust and be disappointed.

The Congress is suffering from defectors. It is also reflected in Puducherry too, ahead of the elections.

Again I am reiterating this point. The people voted for the NR Congress-led alliance just on the basis of past experiences, i.e., the skirmish between the Lt Governor and the Congress. The defectors are not the reason for the alliance’s victory.

So, what have you done to strengthen your party? And how is your relationship with Narayanaswamy?

We had a membership drive and included more than one lakh youth in our party. All are digitally verified members. In each constituency, at each booth level, we have at least 25 cadres.

Sometimes, we too have differences of opinions among leaders within the party but we manage it smoothly. Besides, Narayanaswamy is looking after his job and I am looking after mine. And, still there is time for all election-related calculations both at the state and the national level.

What are your dreams for Puducherry to put it on a development path?

We need a finance commission to improve our economy and Puducherry Public Service Commission for employment. All the jobs are being taken by the people from other states and to stop this practice, we need such a commission. Once we get a stable status for this UT, all our dreams will come true.

Finally, tell us about your old friend Rangasamy. How would you measure your his tenure as CM so far?

(Long pause) Whether he is a good actor or an opportunist? You decide.