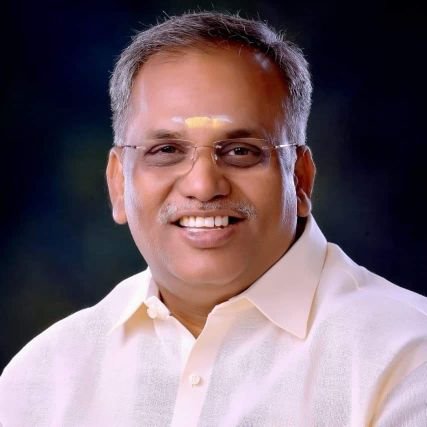 The BJP MLA from Manavely constituency, Embalam R Selvam was the lone nomination for the Speaker's post. Pic: Twitter @embalamrselvam

The Puducherry Assembly, which has witnessed tumultuous scenes in the recent past, touched a new low on June 16 (Wednesday) during the election for the Speaker of the House. As it turned out, the BJP MLA from Manavely constituency, Embalam R Selvam, a first-time MLA, was elected unopposed as the Speaker.

Until 12 pm on Tuesday, Selvam’s name was the lone nomination for the Speaker’s post. Clearly, since there was no opposition, he was elected and Selvam was sworn in on Wednesday (June 16) as the 21st Speaker of the Puducherry Assembly.

Political observers felt that he lacked experience and probably, not a suitable choice. “The BJP should have selected a person from their camp who had prior experience as an MLA,” pointed out S Ramachandran, a political commentator.

Selvam is a first-time MLA, said Ramachandran. “He does not have any previous experience as a Speaker nor as an MLA. So, how is he going to conduct the proceedings in the House? Already, the Union Territory is run by bureaucrats. In the previous regime, they never allowed ministers to touch any files. When an inexperienced legislator becomes a Speaker, he will be more dependent on bureaucrats,” he said.

However, NR Congress Chief N Rangasamy has tried his best to satisfy his ally, the BJP and has also saved his face in the bargain, observed Ramachandran. “Earlier, the BJP had wanted to make one of the nominated MLAs as a Speaker. As per tradition, the party which has the more number of MLAs should send a candidate as a Speaker. In Puducherry, the NR Congress has 10 MLAs and BJP has only 6 MLAs. Providing the Speaker post to their ally is itself basically wrong. This at a time, when BJP has appointed three nominated MLAs, and the Cabinet has not been inducted,” he added.

Interestingly, as far as Puducherry is concerned, there are no hard-core BJP leaders who have been in the party for a long time. They don’t have a true leader, who has developed the party from the scratch. The BJP leaders who are currently holding sway in the party have jumped ship from other parties such the DMK, AIADMK, NR Congress and Congress.

Thanaraman, a CPI member and a writer said wryly, “But that is the party which has an upper hand in the Union Territory now.”

According to Thanaraman, given that BJP has 12 MLAs (6 MLAs, 3 nominated MLAs and 3 independent MLAs), the party can even stake a claim for the Chief Minister’s post. The Rules of Business of the Government of Pondicherry, 1963, Section 3 states that a ‘member’ means a legislative member including a minister.

“There is no difference between legislative member and a nominated member. So, even if they had elected a nominated MLA as a Speaker, it is not wrong legally. But morally, it is not democratic,” he added.

To avoid the possibility of such situations, Thanaraman suggested that either the government should remove the post of nominated MLAs as like other States have done or create a separate Legislative Council for the nominated MLAs.

“Let the Assembly conduct joint sessions with the Legislative Council. If you have the nominated MLAs as a Legislative Council, then they will lose their power of voting during a no-confidence motion. Or, completely scrap the category like Tamil Nadu has done. The latter has no more Anglo-Indian MLAs in the Assembly as before,” added Thanaraman.

When asked the reason why the Opposition did not file a nomination against Selvam, the DMK MLA Anibal Kennedy told The Federal that they didn’t want to disturb the present disposition. It is to be noted that DMK is the main opposition in Puducherry Assembly now.

“If Selvam filed the nomination just as a BJP MLA, then we could have filed a nomination. But he was supported by Chief Minister Rangasamy. The NR Congress and BJP are united and we don’t want to disturb their unity. Our job is to point out the mistakes,” he said.

The Federal tried reaching Selvam but he was not available for comment.