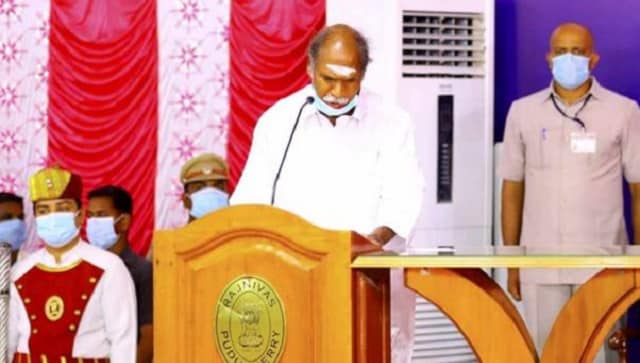 Even as the Puducherry CM, N R Rangasamy delays announcing his cabinet, a BJP MLA said that NR Congress has accepted the BJP's demands and the swearing-in may take place on June 14. Pic: PTI

On June 7, Tamil Nadu Chief Minister MK Stalin will complete one month of governance in the state, but in neighbouring Puducherry, the Chief Minister, N Rangasamy is still struggling to form his cabinet.

The All India N Rangasamy Congress (AINRC) founded by Rangasamy, had won the Assembly election with BJP and AIADMK as its allies. While the NRC won 10 seats out of the 16 seats the party had contested and the BJP bagged 6 out of the 9 seats, the AIADMK drew a blank at the hustings even though the party had fielded candidates for 5 seats.

Rangasamy was sworn in as the Chief Minister on May 7 but within couple of days, he was admitted to a Chennai hospital after he contracted COVID-19. The swearing-in of the MLAs  naturally got delayed and they were finally able to take oath only on May 26.

The cabinet however hangs fire and is yet to be formed. The reason why Rangasamy  procrastinates over forming a cabinet is because of the pressure he is facing from the BJP. The BJP wants the deputy Chief Minister’s post for its MLA, A Namassivayam and two more minister posts for its two other MLAs.

NR Congress leader K Lakshminarayanan told The Federal, “We are in discussions with the BJP MP, Rajeev Chandrasekar for the last two days (June 4 and 5). The Chief Minister is ready to provide the Speaker’s post and two ministerial berths. But the BJP expects more. Hope we will arrive at a consensus soon.”

Questioned on whether the NR Congress was unhappy with the appointment of three nominated MLAs from the BJP to the Assembly, Lakshminarayanan replied that they were not disappointed. However, he added, “Rather as an ally, BJP has not acted accordingly. They should have discussed with the Chief Minister before appointing MLAs of their own,” he said.

Meanwhile, PML Kalayanasundaram, a BJP MLA denied that there were any differences between BJP and NR Congress on the formation of the cabinet. “There is no dispute between us. The NR Congress has accepted our demands and the swearing in may take place on June 14,” he revealed.

But how has the absence of a government affected the COVID-relief works in the UT?

“In Puducherry, the people vote not for parties but for personalities. I am an example of that,” said J Prakash Kumar, an independent MLA from Muthialpet, adding his relief work during the COVID-19 relief work had helped him to get elected as an independent.

In fact, most MLAs undertake their own relief measures without depending on the government, he added. However, he admitted that the dispute between the NR Congress and BJP has delayed the cabinet formation. “It is a well-known fact that the CM will not accept the BJP’s demands and it is wrong for the latter to demand the deputy CM post or Speaker post. Being an ally, they should know their limits,” said Kumar.

The NR Congress leader Lakshminarayanan claimed as well that around 300 oxygen beds have been added in the UT to fight COVID-19. “The CM also announced a scheme to distribute ₹3,000 as COVID relief for the people. The file has gone to the Lieutenant Governor (LG) and once it is cleared it will be implemented. The LG has also provided her full support to us and the positive rate is also falling gradually,” he said.