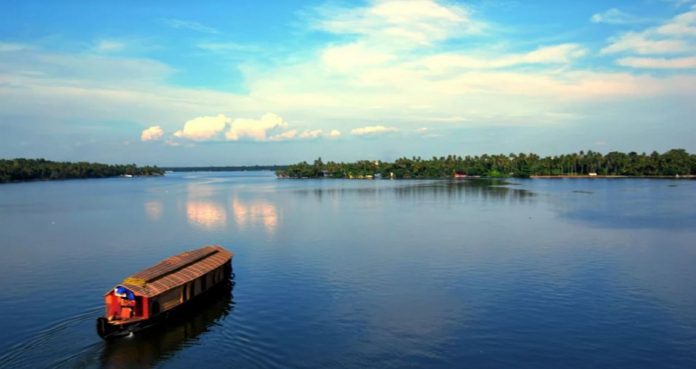 Kerala’s once scenic Ashtamudi lake, described as the gateway to the state’s backwaters and preferred by tourists for houseboat rides, has become a dump site for sewage which is slowly choking it to death.

“Very pathetic” is how the Kerala State Legal Services Authority’s (KeLSA) report to the High Court, describes the condition of the lake after inspection, which is spread over an area of around 1,700 sq km, and surrounded by swaying coconut groves and palm trees, and spotted by several small islands.

The report also said that sewage from the nearby residences and government establishments is the main reason for pollution of the lake, and also for putting its unique wetland ecosystem under risk of permanent damage.

“The eight arms or channels of the Ashtamudi lake are what gave it its name. It is the entrance to the famous backwaters of Kerala and the houseboat rides here are extremely famous. The Kollam to Alappuzha route is considered among the best in the backwaters. Cruises here give you a deeper look at the heart and spirit of the backwaters,” Kerala Tourism claims in its website.

However, the ground reality is something else. Local resident K M Salim told PTI that no one would want to walk alongside the ‘highly polluted’ lake, let alone go for a ‘cruise’ on it, when it is reeking with the smell of decades worth of municipal solid waste and sewage.

Incidentally, it is based on his letter sent to the Kerala High Court, that it decided to examine the issue, initiated a PIL on its own, and asked KeLSA to inspect the waterbody, which is the second largest lake in the state, and is spread over an area of around 1,700 sq km.

Salim further said that tourism too has contributed to the lake’s pollution as effluents from the house boats are also discharged into the waterbody.

District Judge and KeLSA Member Secretary K T Nisar Ahammad, who inspected the lake, told PTI that the filth and garbage floating in the lake and choking its ecosystem, which includes thousands of years old mangrove trees, also includes ‘legacy waste’ dumped there over the past several years.

The judge further said that people do not realise that polluting the waterbody could very well affect the underground water in the area and eventually the general public health in the long run.

“This situation is not just confined to Ashtamudi lake, it is prevalent in many other places in the state. People don’t realise that the quarrying of mountains and dumping of filth in rivers and lakes would have serious environmental consequences. There has to be awareness on this issue,” the judge said.

The judge further said that with a little bit of effort, the corporation could have cleaned up some portion of the lake, especially the part close to the KSRTC bus stand where the situation is really bad, but no one, including the local body, appeared to be bothered.

The judge said that few years back the government had sanctioned funds for cleaning up the lake, but it never took off and now there was another project, worth over ₹100 crore, in play for the same purpose.

Salim said that the garbage and filth was being dumped in the area for years and as a result more than 100 species of fishes, mangroves, coconut groves and palm trees were being adversely affected.

Salim, who has been staying there for decades, said that he remembers his younger days when he used to take a dip in the lake along with his friends. “Now you cannot even dare to dip your hand in the water, as if you do you could end up having rashes or blisters or some other infection,” he said.

Salim said that even the fish, like Karimeen, which are found in the lake, no longer taste the same as they used to during his younger days due to the pollution.

“You cannot walk along the lake side without your olfactory senses being overwhelmed by the stink emanating from there,” Salim added.

Photographs attached along with the KeLSA report, filed through advocate Santhosh Mathew, show all kinds of garbage and waste floating in the lake, along with the house boats, turning its colour to a murky green.

In some photographs, which according to the judge ‘speak volumes’, the waterbody looks more like an open drain and less like a lake whose borders are also lined in many places with garbage.

What is more anguishing, other than the inaction of the local bodies and their contribution in polluting the lake, is the fact that Ashtamudi, despite being a Ramsar site, a wetland site designed to be of international importance under Ramsar Convention, which is also known as the Convention of Wetlands, nothing was being done by anyone to remedy the situation, both the judge and Salim said.

“The Convention, an intergovernmental environmental treaty adopted in 1971 by UNESCO and which came into force in 1975, provides for national action and international cooperation regarding the conservation of wetlands and wise sustainable use of their resources,” according to the KeLSA report.

The report by KeLSA further states that inspection of the lake revealed that the main reason behind its pollution was the direct dumping of sewage into it from the nearby government institutions, residences and a public toilet, very near to the waterbody, meant for passengers arriving at the KSRTC bus stand close by.

It also said that while the Secretary of the District Panchayat denied dumping of sewage waste in the waterbody from a nearby district hospital, “the fact remains that the lake is highly polluted and its present condition is very pathetic.”

The report also said that the pollution of water bodies, like Ashtamudi lake, in this manner has become a common scenario in the whole of Kerala.