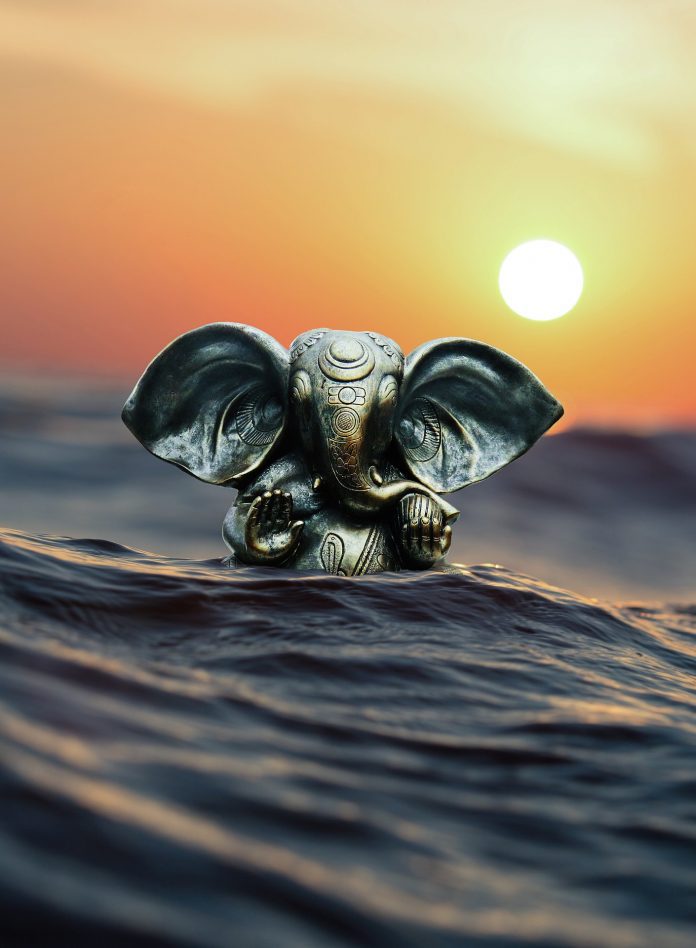 A PoP idol, once purchased, can be used every year. To keep the tradition of immersion alive, a metal idol can be immersed in a small tank or a bucket and recovered later.

Devotees in Maharashtra are excited about getting their favourite deity home for Ganesh Utsav which begins on September 10. Like every year, people debate if the idol should be made of clay (a component of soil) or plaster of Paris (PoP).

The Maharashtra government is convinced that idols made of PoP are harmful for the environment, in the sense that they pollute rivers and lakes. In fact, the Nagpur Municipal Corporation is sealing shops that sell PoP idols and have even employed police force to stop those who resist.

But is PoP really so bad? If it is then how is clay (called ‘shadu mati’ in Maharashtra) any better? Is the argument that ‘shadu-soil-is-natural-therefore-eco-friendly’ fair?

Basically, any idol, irrespective of the material used to make it, will eventually pollute water. What matters is the amount of pollution. It may be argued that ‘shadu’ Ganpati is made of nothing but soil (which is not completely true) and so it’s less polluting. But the fact is that a ‘shadu’ Ganpati idol, when immersed in a river or lake, dissolves and the clay settles at the bottom of the water body. A PoP idol, on the other hand, hardly dissolves and floats on the water body after some time, thus can be recovered and reused in construction work. So, isn’t a PoP idol better than a clay idol?

“For the last few years, newspapers have been carrying pictures, post-Ganesh Utsav, of PoP idols floating on water bodies. It was very disturbing for devotees, who were moved at the sight of idols with missing hands, legs and, at times even heads! Therefore, a movement built up, over the time, which advocated a ban on such idols and drummed up support for clay or ‘shadu’ idols instead,” says a photojournalist, who has covered Pune’s famous Ganesh Utsav for several years.

“I wonder why nobody asked the Pune Municipal Corporation why it is difficult to simply remove PoP idols from the water and send them for reuse? Or, at best, stop immersion in rivers completely,” the photojournalist asked. 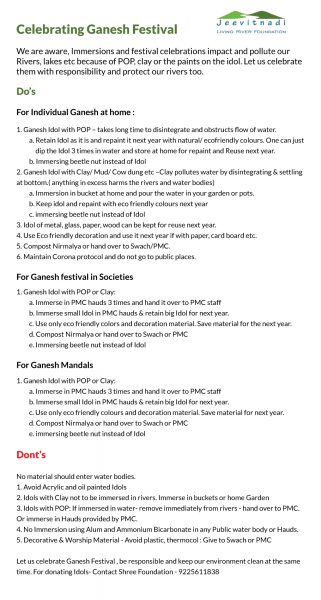 “It is a myth that Ganpati idols made from ‘shadu’ are eco-friendly. The ‘shadu’ clay is extracted from mines in Gujarat, which is not eco-friendly,” says Snehal Jangam, a blogger, who has been campaigning extensively against the misconceptions surrounding eco-friendly Ganesh Utsav.

Dr Pramod Moghe, a former scientist with National Chemical Laboratory, Pune, studied the effects of both types of idols on the quality of water. Dr Moghe and his team immersed a PoP idol in one container and a clay idol in another to study the changes in water quality for 10 days and thereafter. “A PoP idol dissolves only 0.3%, but calcium sulphate from the idol mixes with water and pollutes it. This water, however, can still be used for agriculture purpose. However, a shadu idol, disintegrates completely and cannot be recovered. Thus, adding to the water body’s silt load. The acrylic colours applied on idols mix with water and reduce its ability to absorb,” Dr Moghe said.

The scientist did not find any difference in the biological oxygen demand (BOD) and chemical oxygen demand (COD) of water during the 10 days. “Which means clay idols are not doing any good to improve water quality. Besides, there is no scientific evidence to prove that ‘shadu’ is good for water,” he added.

Additionally, the clay from ‘shadu’ idols goes to the bottom and sticks to sand particles in the river bed. This is an obstacle to the water filtration process in rivers. ‘Shadu’ clay also contains heavy metals like silica, magnesium, magnesium and iron, which eventually enters our food chain.

Shailaja Deshpande of ‘Jeevitnadi’, an organization dedicated to cleaning rivers of Pune, said, “Firstly, we need to correct our idea of eco-friendly Ganesh Utsav. It is absolutely necessary that natural sources of water are preserved. Anything, clay or PoP, when used in excess will definitely pollute water. No way do we suggest that festivals should not be celebrated. What needs to be changed though is the way we look at them. This is the need of the time.”

A PoP idol, once purchased, can be used every year. To keep the tradition of immersion alive, a metal idol can be put in a small tank or a bucket and recovered later, Deshpande added.

In 2019, 1.96 lakh idols were immersed in Mumbai alone. In Pune, the number stood at 5.30 lakh. It is difficult to imagine how many idols are immersed in rivers and lakes all through Maharashtra and in India every year. Small changes in our practices can make a big difference to the natural environment we so desperately want to sustain and improve.