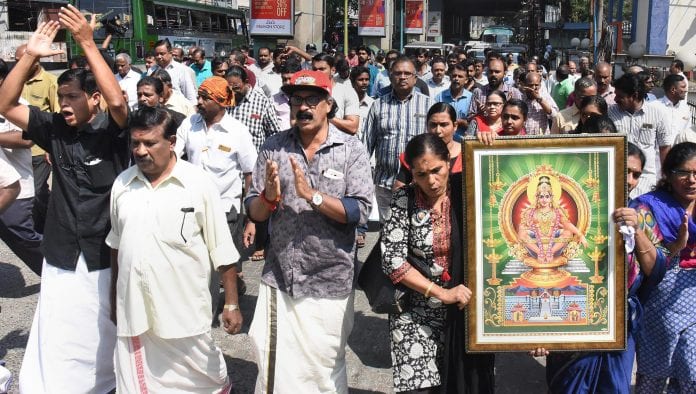 The Kerala cabinet has taken the controversial decision to implement reservation for the economically backward sections among the general category. It has approved amending the Kerala State Subordinate Service Rules to provide 10 per cent reservation for them, in a move that has irked Dalit and OBC organisations and activists and has given rise to allegations that the Left government is trying to reclaim the support base among the upper caste communities.

The Left parties believe allowing women to enter Sabarimala has eroded their support base among the upper castes, especially the Nair community, in Kerala.

Related News: States not bound to give quotas for SCs/STs/OBCs, rules SC

After the Centre’s 103rd Constitutional amendment that provided the 10 per cent reservation, the Kerala government had appointed a committee to study the matter. The committee headed by retired district judge K Sasidharan Nair submitted the report listing the  criteria to identify the economically backwards among the forward communities.

“The central government does not insist on 10 per cent. It only says reservation up to 10 per cent. The states have the authority to take decisions according to the demographic profile of communities. If we apply that criteria in Kerala, those who deserve economic reservation would almost be zero,” said Sunny Kapikkad, a Dalit intellectual and activist. He alleged that this is nothing but an attempt to please the upper caste communities, like the Nairs, who had become hostile towards the government after the Sabarimala episode.

The Sasidharan Nair committee submitted the report on November 29,  2019. According to the recommendations, forward community members whose gross annual income falls within the limit of Rs 4 lakh should be made eligible for the reservation.

The Dalit activists in Kerala allege that if the government follows the recommendations of the committee, it will benefit only benefit those who are already rich.

According to the recommendations , “Persons whose family owns or holds an extent of more than 2.5 acres of land in grama panchayat area or more  than 75 cents in municipal area or 50 cents in municipal corporation area  are excluded from being identified as economically weaker sections in (the)  general category.”

In Kerala, only the rich have such land holdings, said Kapikkad. In addition, the committee has given elaborate provisions of exemption in calculating the annual income. For example, agricultural income from house plots in municipality or­ municipal corporation areas of which the ceiling limit is specified is exempted. Similarly, amounts received in the form of social security pensions such as family pension, unemployment wages, festival allowance, terminal benefits and travel allowance are also excluded from calculating the annual income.

Related News: Why tribals in Telugu States are angry with SC ruling on reservations

He said the CPI(M), despite claiming to be a party of the poor, has always favoured economic reservation. “The administrative reforms committee installed by the first government in Kerala under EMS Namboothiripad recommended implementing economic reservation. Historically, the CPI(M) has never been able to understand the concept of reservation at all,” Kochu said.