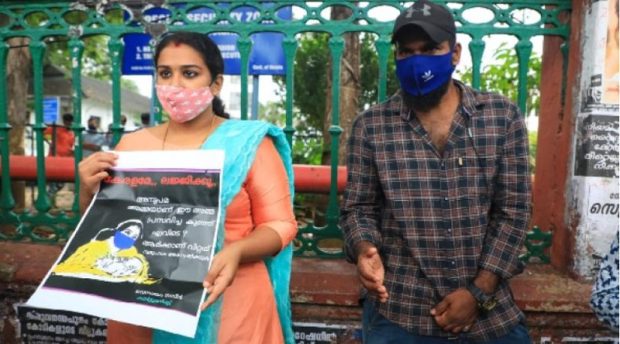 The Child Welfare Committee continued with the adoption procedure despite the biological mother appearing in person with the complaint of her missing baby. Pic: Twitter

Finally, the mother and the baby are united. The family court at Thiruvananthapuram issued the order to hand over the child to its biological mother, Anupama S Chandran, who had fought hard to get her baby back that was illegally handed over to prospective adoptive parents by the authorities.

The DNA test conducted yesterday (November 23) was positive and the Child Welfare Committee produced the child in the court today. The baby was handed over to Anupama and Ajith in the court. The couple, who have named their little boy, Eden Anu Ajith, reached the venue of the long-standing protest in front of the office of the Kerala State Child Welfare Council.

They were received with flowers and sweets by the activists who had been maintaining a vigil at the spot since the beginning of this battle. K K Rema, the lone MLA of RMP (Revolutionary Marxist Party), activists and feminist scholars such as as P E Usha, J Devika and Maglin Peter, who received Anupama and Ajith at the venue told the media that the struggle will continue until the government takes appropriate action against the people involved in snatching the baby away from the mother and proceeded with the adoption despite a complaint registered by the mother with them.

Anupama expressed gratitude to all the media and her fellow activists for supporting her battle.

The battle however is not over. The enquiry conducted by the director of Women and Child department, T V Anupama, has found serious lapses and procedural flaws on the part of the CWC and the KSCCW in this case.

Asianet News reported that the Child Welfare Committee had an online consultation with Anupama on April 22 after she had complained about her missing baby. Despite this complaint and consultation, which is on the record, the CWC went ahead with the adoption procedure and declared the baby ‘legally free for adoption’.

Besides, Anupama went to CWC in August only a few days after the baby was handed over to the Andhra couple for pre-adoptive foster care. Despite the biological mother appearing in person with the complaint of her missing baby, the CWC continued with the procedure of seeking the family court’s approval, which is the final step of the adoption procedure.

It is also reported that, Ajith, Anupama’s partner, visited Shiju Khan, the general secretary of the Kerala State Child Welfare Council, the adoption agency several times in October 2020, soon after the advertisement had appeared in the newspapers. He went there in search of the child that was allegedly taken away by Anupama’s father.

The departmental inquiry showed that these visits were not recorded. It was also found that portions of the visitor’s register were scraped off in an alleged attempt to conceal the names and dates. Ajith told The Federal that he had repeatedly asked Shijukhan, who was his friend, about the baby. But Shijukhan misled him by convincing him that the baby was not with them in KSCCW.

“I trusted him in the beginning, because he used to be a friend. He told me that as a friend he would never tell a lie about my baby,” Ajith told The Federal with a heavy heart. He had trusted Shiju Khan implicitly and this was also the reason for the delay in searching for their baby, he added.

“We will not stop this battle,” said P E Usha. “The findings of the departmental enquiry are very serious. The office bearers of KSCCW and CWC, who are responsible for this menace, should be sacked. We also demand a criminal investigation into the matter,” Usha told The Federal.