Following a complaint by a lawyer against the attempts to communalise Vijayanagar market and trigger religion/community-based discrimination among street vendors by putting up saffron flags in commercial areas, two more street vendor associations have filed complaints against the same.

This comes after a complaint was filed by Maitreyi Krishnan, lawyer and member of the All India Central Council for Trade Union, Karnataka, on May 22, who pointed out a Facebook post by the ‘Uttara Karnataka Mandi’, which had posted photos of people putting up saffron flags. She also said M.L. Shivkummar was identified as the person behind it.

In a series of posts and videos on his Facebook page, Shivakummar, on May 19, showed his team putting out the saffron flags in Hindu owned/managed shops.

Over the past few days, saffron flags bearing the ‘Om’ symbol have been put out by alleged Bajrang Dal and RSS members in front of commercial establishments and shops along the roads of Vijayanagar in the city. The flags were placed on communal lines and outside shops managed and run by Hindus.

A vendor, a Muslim man (name withheld) running a leather shop in the area and whose shop did not have the flag, said no one knows what was to come and the incident occurred last night without their notice. “We don’t know what their agenda is. For now, these flags are threatening. But it seems to have put out to create communal tensions,” the vendor said.

Maitreyi alleged that the perpetrators violated the Karnataka Open Places (Prevention of Disfigurement) Act of 1981 by putting up saffron flags on trees and poles in public places. 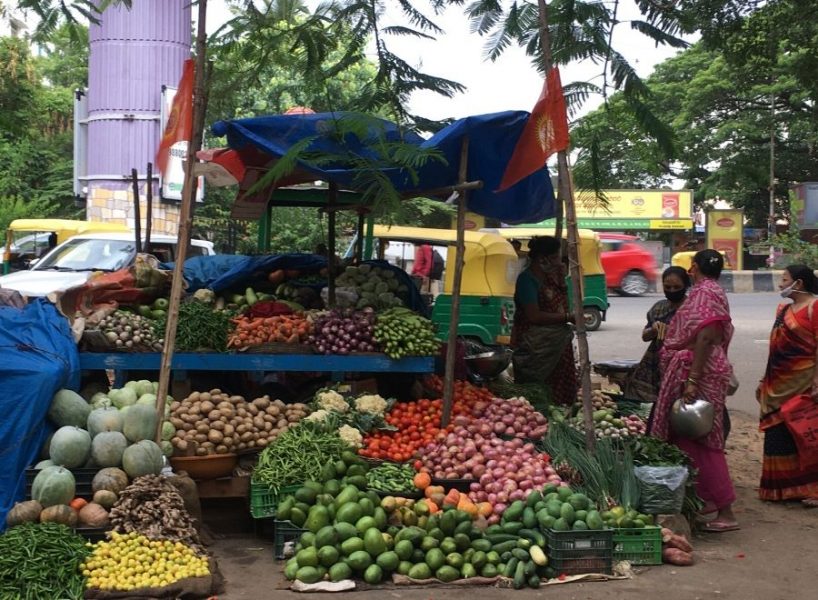 Following Maitreyi, two other named Gowri and Sindhu registered similar complaints on May 22.

Despite the complaints registered so far, police officers have been reluctant to take action the perpetrators.

Before the complaint was filed, inspector M.M. Bharath had said that there was no violation and it was all voluntary. “We are not taking any action as no one complained about it. We do not see any violation in putting out these flags,” the inspector said.

However, soon after the first complaint was registered, contradicting his statement to The Federal, the inspector informed the complainant that they have already taken a suo motu action and issued a notice under police act and disfigurement act.

LIC continues to bet big on Adani Group amid ...