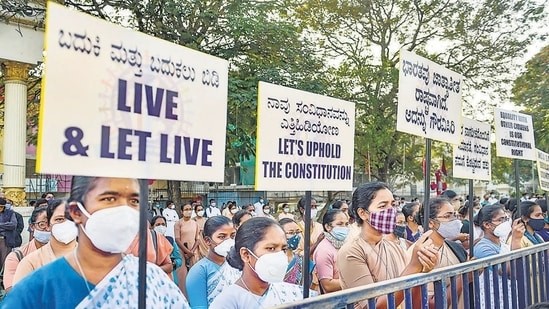 Karnataka has reported spurt in attacks on Christians after the Anti-conversion Bill was tabled in state assembly recently. | Representational image

The Belagavi police in Karnataka booked five members of a right-wing Hindu organisation for allegedly disrupting prayer at a Christian house.

As per complaint, six to seven men barged into the house of pastor Akshay Kumar Karaganvi when he was holding annual prayers. Karaganvi told the police that the men disturbed his prayers claiming is family was involved in conversions.

Kavita, Akshay Karaganvi’s wife, told the police in her complaint that a woman, Bharati Vyapari, sustained burn injuries when the attackers threw hot curry on her.

The Ghataprabha police have registered a case under 326 (causing grievous hurt by dangerous means, 354 (outraging the modesty of women) and 392 (robbery) and sections of SC/ST (prevention of atrocities) Act. However, they are yet to make any arrests.

Kavita Kumar told police that the prayers were held as part of an annual ritual after Christmas and there was no conversion taking place.

In another incident, which happened in Tumakuru district recently, a group of men entered a house alleging conversion. The women at the house fought back. However, no police complaint was reported.

In Mandya, some right-wing groups allegedly attacked a school demanding teachers to stop Christmas festivities, saying it was an attempt to lure children towards Christianity.

These attacks have happened almost a week after the Karnataka government tabled the Right To Freedom of Religious Bill, 2021, commonly known as the Anti-Conversion Bill. However, it could not become a law as the BJP failed to get it approved in the State Legislative Council.