The Karnataka government on Monday (May 11) shunted out IAS officer P Manivannan, who served as the secretary of Labour and Information Department, later to be posted as the Secretary of Animal Husbandry and Fisheries Department.

The government transferred Manivannan under pressure from the real-estate and builders’ lobby, who resisted his bid to punish them for not paying salaries to migrant workers on time. The Industries department principal secretary M Maheshwar Rao was given the concurrent charge. 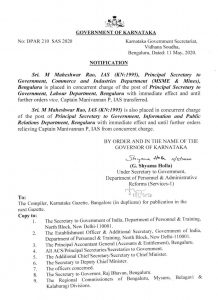 The sudden decision came in the backdrop of the BJP-ruled government facing backlash over its decision to cancel special trains for migrant workers to appease prominent builders and real-estate developers.

Even as the government reversed its decision in two days to resume trains, it caused chaos and confusion among stranded migrant workers, many of whom decided to walk back home as far as 1700-2000 kms.

The labour department sent notices to employers who violated the labour law. This was after widespread criticism about the government’s silence over the migrant workers’ plight, and news reports about employers confining migrant workers and forcing them to work emerged.

Speaking to The Federal, B.C. Prabhakar, President, Karnataka Employers’ Association, which has more close to 700 members, said, more than half the members expressed concerns over the action of the Labour Secretary and hence made a representation to the Chief Minister asking him to change the Labour Secretary.

“It was the ‘dharma” of the Labour Secretary to protect both the employers and employees. But it seems as if Manivannan ignored the industries’ plight and tried to help only the workers,” Prabhakar said.

Thread. It is shocking and condemnable that @BSYBJP govt has transferred @mani1972ias because of pressures from industries lobby. How can industries ask for labour secy to be transferred because he tried to implement central govt notification ?
1/n pic.twitter.com/zRvwFcVyZe

Manivannan had actively encouraged workers to register complaints against the employers over concerns of delayed payment, non-payment of wages, and retrenchment.

Several migrant workers who spoke to The Federal over the past month, complained of non-payment of wages during the lockdown period.

“They did not want the bureaucrats to misuse the powers and threaten them of action and hence their letter to CM was not wrong at all,” said Prabhakar while explaining how the high-handedness of the Association is playing a crucial role in ousting a bureaucrat.

Yesterday at 9 PM, I have handed over charge of both depts (Labour & DIPR). Thank YOU for the guidance and support! Please extend the same to my successor.

I look forward to new challenges. I can be contacted thru the Telegram messenger https://t.co/oLbpn3Q6jb

Even with lack of resources, Manivannan handled the COVID-19 situation by roping in volunteers across the state and working with them to reach out to the needy and poor.

Besides, he also played an active role in making the Department of Information and Public Relations to attend to the complaints on social platforms and respond to the affected with a solution.

He created a Telegram group, with over 27000 members to disseminate information on COVID-19 crisis and fight fake news.

The Labour secretary, 1998 batch officer and a captain in the Territorial Army, is not new to transfers.

In 2007 under the chief ministership of B.S. Yediyurappa, Manivannan who was already transferred refused to succumb to political pressure, and went on a demolition drive (of illegal structures in the city) while he was the commissioner of Mysuru City Corporation.

Meanwhile, the opposition grew from the civil society groups to reinstate the officer without buckling to the pressure of the industries.

“We have our fair share of differences with Manivannan, but this decision of B S Yediyurappa is nothing but bowing to the dictates of the industries lobby,” Clifton D Rozario National secretary of All India Central Council of Trade Unions said in a Tweet.

We have our fair share of differences with @mani1972ias but this decision of @BSYBJP is nothing but bowing to the dictates of the industries lobby. https://t.co/SEVesq6Obo

Meanwhile, CM Yediyurappa, much on the lines of Uttar Pradesh CM Yogi Adityanath, is expected to set off a series of amendments to labour laws in the state to make it easier for struggling industries.

The government is likely to amend the Factories Act, Industrial Disputes Act, and Contract Labour Act among others.