Nearly 1,800 migrant workers are under confinement inside the construction site of a project involving three prominent industrial groups — Prestige Group, L&T and Jindal Group — in Bengaluru since Tuesday (May 5). The workers alleged the builders and contractors were asking them to get back to work.

The migrants, most of whom hailed from Bihar, Jharkhand, Odisha and West Bengal, were eager to take the ‘Shramik Special’ train home, but the special trains were cancelled on Tuesday, following which they were locked up at the construction site, the workers alleged.

The labourers were working for Prestige Jindal City, a housing project of the Prestige Group, built on Jindal land with L&T as construction partners. The project is spread over 32 acres on the outskirts of the city on the Nelamangala-Tumkur Road near Peenya Industrial area.

The workers alleged that soon after the trains were cancelled on Tuesday, the builders locked them up and were continuously asking them to resume work. But, unwilling to relent, the workers said they would resume work only after the pandemic is fully controlled.

Meanwhile, the BS Yediyurappa government in Karnataka on Thursday decided to resume the special train services that were earlier cancelled at the behest of the leading property developers of the state. 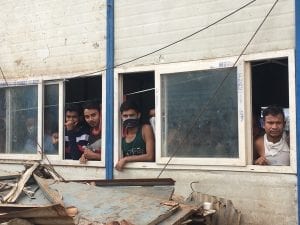 When The Federal visited the construction site, where the workers are kept in confinement, the police initially denied entry. However, the workers jumped the gate, and came towards the road, still within the project site, to voice their concerns.

Related news: Construction cos use cops to stop migrant workers from leaving Chennai

Some of the workers had registered under Seva Sindhu, the state’s online platform to help stranded migrants reach their home state, and had even received confirmation messages. Some even came up to claim that their medical tests were also completed.

Meanwhile, social distancing norms were also flouted as the 1,800 workers were kept inside the construction site, with 10-12 people in each dingy room.

“We do not have enough water to bathe. The rice they give does not last for a week. Even though our registrations (for migrants leaving the state) are done, why are the state and L&T Constructions holding us back?” asked Ranjan Garu, a worker from West Bengal, from inside the construction site.

“They are asking us to work. What if we catch a virus at the workplace? With our living conditions here, the virus will spread fast as we all live in groups,” he said. 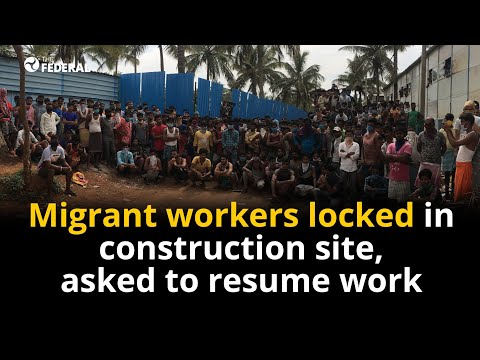 On May 7, after the construction site engineers entered the site to convince the workers to resume work, the angry labourers took them into their custody. They did not release them for a few hours until the local police were called in.

“They are saying they want to go home and come back later. But we came to ask if they are willing to work as the train and bus services have been cancelled,” one of the L&T representatives, who did not reveal his name, told The Federal.

Around 100 police personnel were deployed at and around the site to ensure the workers don’t create ruckus.

“After the first and second phases of lockdown, we obeyed the government rules and stayed inside. None of us came out and no one caught the virus. Now let the government listen to us and let us return home,” said Vijay Kumar Mandal, a worker from Jharkhand. 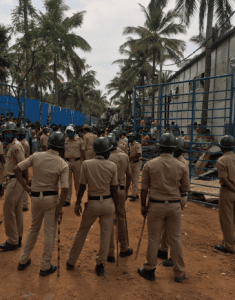 “If the Telangana and Maharashtra governments can let the migrant workers go home, why not us?” he asked. Mandal, on behalf of nearly 400 workers standing behind him, appealed to the Yediyurappa government and L&T to ensure their payments are done, and that they are allowed to return. He said they will return to work once the pandemic is under control.

Meanwhile, P Manivannan, Karnataka labour secretary, told The Federal he would look into the concerns of the workers and assured necessary action by Friday.

Garu, one of the workers, said the labour secretary will visit them on Friday, and address their concerns about payment and special trains.

Madanayakanahalli police sub-inspector Devika, under whose jurisdiction the workers are residing, said they are trying to convince them to wait for two more days, and that they are in talks with the government to sort out the issue.

Emails sent by The Federal to all the three companies did not elicit any response.