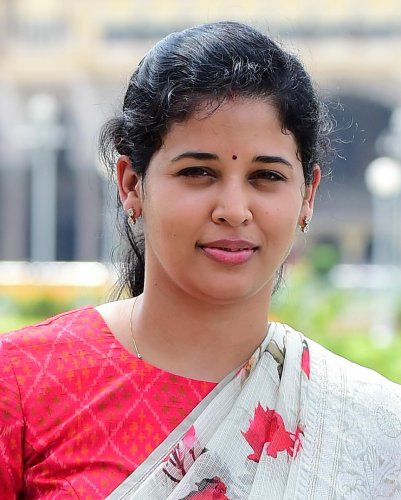 Whether the news of a movie being made on her brings her joy or not, Rohini Sindhuri is upset with the transfer and accusations of her alleged harassment of another IAS officer

Kannada filmmakers have an obsession with civil servants. In the 1990s and 2000s, they made movies based on Indian Police Service (IPS) officers who were in the limelight for handling high-profile cases.

In the ’90s, movies were made on the life of cop-turned politician HT Sangliana, the Mizoram-born Karnataka cadre officer who had played an instrumental role in the build-up to dreaded sandalwood smuggler Veerappan’s encounter.

Then there was Kempaiah IPS, which was based on the officer with the same name who was successful in hunting down Rajiv Gandhi’s assassins in Bengaluru. Also, there were movies like Deadly Soma and Myna based on real-life incidents of a retired police officer, BB Ashok Kumar. Leading Kannada actors played the top cop role to take down the criminals and politicians.

Today, filmmakers have shifted their focus to Indian Administrative Service (IAS) officers. Of late, when a woman IAS officer in Karnataka is either praised for exemplary work or gets into a controversy, the sandalwood film industry is sure to sit up and take note.

Now, the Kannada film industry is all set to make a movie on the life of a serving IAS officer, Rohini Sindhuri. According to reports, director Krishna Swarnasandra is slated to direct the movie with Akshata Pandavapura playing the role of Sindhuri.

Sindhuri, who was the Mysuru Deputy Commissioner, has been in the eye of the storm for various reasons. Earlier this month, following a spat between her and another IAS officer in Mysuru allegedly over a power tussle amid the pandemic, Karnataka Chief Minister B S Yediyurappa transferred both the officers out of the district Administration.

Sindhuri has now become the Commissioner for Hindu Religious and Charitable Endowments and Shilpa Nag, the director for E-governance, Rural Development and Panchayat Raj Department. Now Sindhuri has alleged that her transfer has a political intent because of her attempts to stop a land scam expose.

While the Mysuru City Corporation (MCC) Commissioner Shilpa Nag has complained of “harassment” and “humiliation” at the hands of Rohini Sindhuri.

As Deputy Commissioner of the district, Sindhuri has the right to question the business transactions of the MCC. In a letter to the Chief Secretary, Sindhuri said the COVID care centers run by MCC were overcharging patients and it was done in collusion with local politicians. Hence, she had ordered for the closure of CCCs, which, reportedly led to the differences between the two.

Sindhuri denied the harassment allegations and said she had only questioned the misuse of funds and shut down the COVID-care centers.

Also read: Will continue as long as leadership has confidence in me: Yediyurappa

Before the transfer, Sindhuri also got into a verbal duel with Mysuru BJP Member of Parliament Pratap Simha, who criticised her for ‘mishandling’ the COVID crisis. Even as Simha, as a MP, was reviewing some of the projects in the districts, he questioned Sindhuri for her action to shut down CCCs. They were shut down because they were violating COVID care guidelines, she had said.

Sindhuri accused Simha of fuelling the differences between the two women IAS officers. Besides, she also alleged that JD(S) MLA S R Mahesh has allegedly built a marriage/convention hall on the government land (Raja Kaluve-storm water drain) and reportedly committed other irregularities involving Mysore Urban Development Authority (MUDA). She alleged that the land was converted using false records by the MLA and also the building plan was different compared to the plan submitted to the civic body for approval.

Mahesh happens to be the chairperson of MUDA, a state agency constituted to promote planned development, which approve land transfers in the city limits.

Sindhuri alleged illegalities in the land transfers and she in fact cancelled one such transfer in Lingambudhi village. She said the land transfers were in violation of the National Green Tribunal (NGT) directives and Wetland (Conservation and Management) rules.

“The idea is to threaten and scare officers so that they do not take action on illegality. But I have paid no heed to any of his empty threats. There are irregularities and they need to be probed,” she said.

Reacting to the allegations, the JDS MLA resorted to making a sexist remark asking the bureaucrat to go back to Andhra Pradesh, where she hails from and “cook for her children” if her allegations are not proven to be true.

Though Sindhuri met Yediyurappa and asked him to reconsider his decision, the CM turned down her plea.

Opposition leaders Siddaramaiah took potshots at the government and said “BJP’s elected representatives and JDS MLA Mahesh are responsible for the fight between IAS officers in Mysuru. MP Prathap Simha had previously supported Sindhuri and now stands on behalf of Shilpa Nag. He pitted them against one another,” Siddaramaiah said in a series of tweets.

Sindhuri’s career has witnessed many ups and downs and each time she has resisted political pressure, she has been transferred. A chemical engineer from the University of Hyderabad, Rohini secured 43rd rank in the UPSC exam in 2009.

Sindhuri has been serving Karnataka since 2011, and has played a crucial role in the Swachh Bharat Abhiyan programme. As the Chief Executive Officer of Mandya Zilla Panchayat, Sindhuri launched a drive to provide 1.02 lakh toilets to households in Mandya in 2014-15 and she achieved the target in a year’s time. Mandya was ranked among the top five ZPs to have successfully implemented the project.

She has also initiated integrated farming practices in the Cauvery’s heartland and sugarcane belt of Mandya. Her work received accolades and she was called to Delhi to train district collectors and deputy commissioners of other states in 2015. The central Ministry of Drinking Water and Sanitation invited her to Delhi since she had excelled in implementing the  Swachh Bharat Abhiyan programme in Mandya. She was called to share her experience and train other officers in other states.

But the then CM Siddaramaiah cut short the good work she was doing in Mandya. The state government transferred her and promoted her as the DC of Hassan.

Also read: How Gowda going to Delhi as PM helped BJP come to power in Karnataka

In Hassan, as she took on the mighty politicians and cracked down on the sand mafia in Sakleshpur, she was yet again transferred. Siddaramaiah caved in to the pressure of local leaders and transferred her. However, the redoubtable Sindhuri knocked on the doors of the Karnataka High Court challenging her transfer stating that the CM had done it prematurely at the behest of local leaders.

It was first challenged in the Central Administrative Tribunal (CAT) which upheld the transfer. But the High Court stayed the CAT order and asked the state to reinstate her as DC of Hassan.

Under the BJP government in 2019, she had to face a transfer again as the secretary of the Karnataka Building and Other Construction Workers Welfare Board. Here she resisted attempts to allegedly transfer money from the labourers’ welfare fund to flood relief in 2019. However, the government justified her transfer and she was moved from that post.

Her tumultuous journey as an IAS officer in the past decade has evoked the interest of filmmakers. Similarly, a film was planned on the life of another woman IAS officer before the 2018 Assembly elections.

In 2017, the Kannada movie industry wanted to make a biopic on serving IAS couple Shalini Rajaneesh and Rajaneesh Goel. Shalini played a key role in the implementation of the Sakala scheme, an e-governance project that won the Prime Minister’s award for excellence in public administration in 2012-13. With a lot of fanfare, the then Chief Minister Siddaramaiah had launched the movie title.

Chambal, a movie resembling the life of late IAS officer D K Ravi, deputy commissioner of Kolar district, who had cracked down on illegal encroachment and sand mining, was made. Sindhuri, a batchmate of Ravi, was even interrogated over his death. Whether the news of a movie being made on her brings her joy or not, Sindhuri is upset with the transfer and the alleged harassment by her.

“You will remember this episode soon one day when the grazing lands in Kurubarahalli are gone, open spaces around the city have disappeared and lakes have vanished, replaced by layouts and huge apartment complexes, structures that have absolutely no right to exist there,” she said in an interview to the Star of Mysore. Ominous words that has prompted an online campaign by concerned citizens in her support, which is rapidly gaining traction.