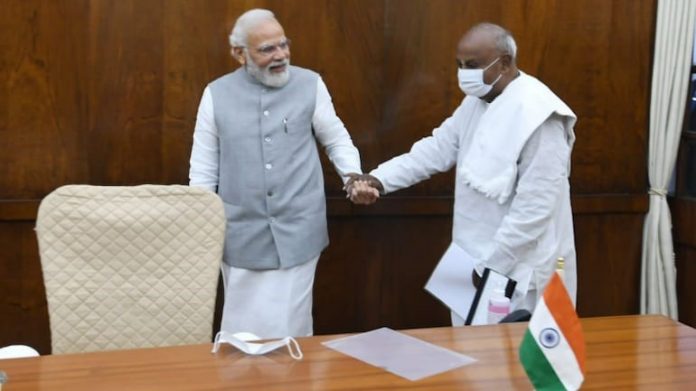 On his meeting with Prime Minister Narendra Modi, JD(S) leader Deve Gowda said that they had discussed the MLC polls and he told Modi that leaders from JD(S) and BJP in Karnataka have to decide on forging an alliance. Pic:: Twitter@narendramodi

All the signs behind the highly-publicised meeting, between Prime Minister Narendra Modi and JD (S) supremo H D Deve Gowda, seem to be pointing towards an alliance between the two parties for the upcoming Karnataka Legislative Council polls.

After the meeting in New Delhi, according to media reports, the former prime minister, Gowda said, “We discussed the MLC polls and I told Modi that leaders from JD(S) and BJP in Karnataka have to decide on forging an alliance.”

Recently, former Karnataka chief minister B S Yediyurappa too had disclosed that he had sought the support of JD(S) in seats where they were not contesting, said an Indian Express report. Karnataka Chief Minister Basavaraj Bommai told reporters in Dharwad on Wednesday (December 1) that Modi and Deve Gowda have discussed the MLC polls and soon BS Yediyurappa and JD(S) leader HD Kumaraswamy will take a decision on this.

The December 10 election will be conducted in 20 local body regions since existing members will retire in January. And, the counting is scheduled to take place on December 14.

Currently, the BJP holds 32 seats in the 75-member house; Congress 29 and the JD(S) 12. The BJP, which is currently dependent on the JDS to push through any legislation in the council, is aiming to gain total control of the upper house.