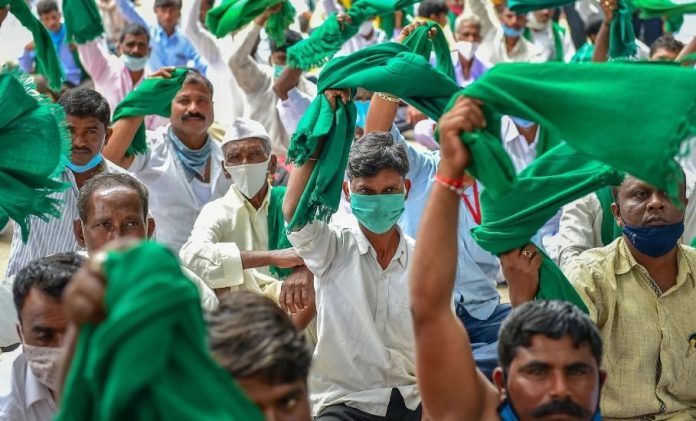 In wake of the ongoing protests by farmers in Bengaluru against passage of the Centre’s contentious farm bills in the Parliament and the state’s land reforms amendment, several organisations have called for a statewide bandh on Friday (September 25).

Even as several farmer representatives are on a sit-in protest in the city since Monday and have decided to intensify their protest across the state, Dalit organisations, labour unions, environmentalists, private taxi owners’ association, lorry owners association, and even auto unions in Bengaluru have now come in their support and backed their demand for a bandh. Even the farmers’ wing of the Congress have extended support to the protest.

Amid backlash from all quarters, the BJP government in Karnataka promulgated the Land Reforms Ordinance, 2020, in July to allow non-agriculturists to purchase agricultural land, besides easing a host of other restrictions. Even as the government vehemently defends the amendments to farm legislations, likely to be debated in the Assembly on September 23, farmers opposed the reforms fearing corporate exploitation in the long run.

The protests held by the farmers’ organisations since Monday, when the assembly session began, will culminate on Saturday when the session ends. The JD(S) and Congress leaders including Siddaramaiah, HD Revanna and DK Shivakumar have met the protesting farmers and extended their support.

“What is the urgency for this government to bring ordinances when they can and should debate them in the assembly and take farmers into confidence before passing legislations,” said Prakash Kammardi, former chairman of the Karnataka Agriculture Prices Commission.

“They took away our rights. They are not just playing with farmers’ lives but also going against the constitution,” he said.

Meanwhile, thinking that farmers representatives of 2,000-3,000 people might not create the required impact, leaders of farmers wings of various outfits have sought the support of other groups.

“If we (farmers) just fight for the farmers bills, we may not achieve the desired results. Since the government is not taking it seriously, we want the larger public, trade unions, opposition parties, and other labour unions to support us in our fight,” said one of the farmer leaders.

Related news: Why farmers from Punjab, Haryana are at forefront of protests?

Even pro-Kannada outfit Karnataka Rakshana Vedike extended their support to the protest saying that the legislations, though they may appear to benefit the farmers, in reality were only targeted to turn them into slaves.

Even as the Congress leaders made a beeline to extend support and talk to the protesting farmers, the ruling BJP sidelined the protest and called it a politically motivated protest.

Replying to the BJP’s allegations, Karnataka Pradesh Congress Committee President DK Shivakumar said, “As a political party we are selfish in our fight. But that does not mean we will not stand up against the anti-farmer legislations by this government.”