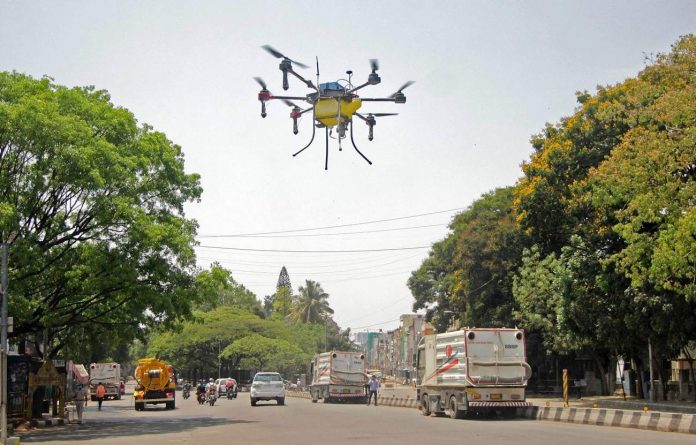 India has about 130 start-ups in the drone segment.

Domestic drone start-ups are seeing an uptake in demand, with the government bringing in policies to ease operations and standardise the approval process for unmanned aerial vehicles (UAVs).

The Centre, in March, notified the Unmanned Aircraft System Rules, 2021, covering various aspects of drone flying, such as quality certification, approval process, regulation of use and curbing misuse. Besides, it appointed the Drone Directorate under the Directorate General of Civil Aviation (DGCA), to help the start-ups coordinate better in terms of policies and industry requirements.

Following the Ministry of Civil Aviation’s permission to 20 entities to conduct Beyond Visual Line of Sight (BVLOS) experimental drone flights, start-ups have started to test e-commerce deliveries in Karnataka.

The BVLOS, outside the normal visible range of the pilot, will help in future drone deliveries and other major applications using UAVs. The move will help the industry have more use cases and help them generate more business, it is anticipated.

Bengaluru-based Throttle Aerospace Systems (TAS) is now testing delivery of medicines about 60 km outside the city limits.  “We have tested about 5-8 cases of medicine deliveries in the range of 8-10 kms in Chikkaballapur, Karnataka.  In the coming weeks we will test it in the range of 15- 20 km,” said Nagendra Kandasamy, founder and CEO of TAS.

Kandasamy further said the government has been working with the stakeholders to help them improve the drone ecosystem and bring in policies to ease operations. TAS will continue with BVLOS tests for the next four weeks, he added.

TAS is partnering with Narayana Health, chaired by noted cardiac surgeon Dr Devi Shetty, for medicine deliveries. The company also has plans to test transporting a live heart for a transplant surgery. The drone would enable easy movement of critical drugs and organs, vis-à-vis taking them on road in rush hour, slowing down the traffic and also getting delayed.

Another firm, Skylark Drone, has partnered with Swiggy and will carry out food delivery testing in a couple of months. It is already helping clients in the mining and solar energy industries.

Skylark was founded in 2014 by two RV College of Engineering graduates, Mughilan Thiru Ramaswamy and Mrinal Pai, in their early 20s. The company helps clients in the mining, agriculture, solar, and transport industry with the industrial application of drones.

The government has started Digital Sky, an online platform for registration and approval of flying drones in the country. Start-ups like IdeaForge, Skylark and Throttle say this has eased the process in a big way compared to what it was two years ago.

“The government policies are in the right direction. We are looking for some more relaxation in the coming days. This is a budding industry and has huge potential to leap forward,” Ramaswamy of Skylark Drones said.  He is eagerly waiting for the government to build a dedicated drone corridor and drone ports to address the safety and expansion of unmanned aircraft systems (UAS) in India.

The existing green zones where they can fly drones are limited in the country and he’s looking forward to government increasing such zones, he added.

The Ministry of Civil Aviation in March granted permission for 166 additional green zones to facilitate, smoothen, and promote drone operations in the country. It allowed drone usage up to 400 ft above ground level in these locations. This is in addition to the 66 green zone sites approved earlier.

Besides, it permitted Central and state government bodies and private drone manufacturers to set up drone pilot training schools.

IdeaForge, a homegrown UAV manufacturer backed by companies like Qualcomm and Infosys, raised funds to the tune of ₹15 crore just before the government notified the UAS rules. The company had said the funds would be used to increase research and development, and business development in the coming months.

India has about 130 start-ups in the drone segment. The Centre is keen to collaborate with these start-ups for surveillance, disaster management, land surveys and more. Its SVAMITVA Scheme, launched last year and one of the biggest projects in rural India, proposes to use drones for land demarcation and to provide an integrated property validation solution.

The FICCI Committee on Drones said in a report that India’s drone and counter-drone market potential up to 2030 is estimated at ₹3 lakh-crore (approx $40 billion).