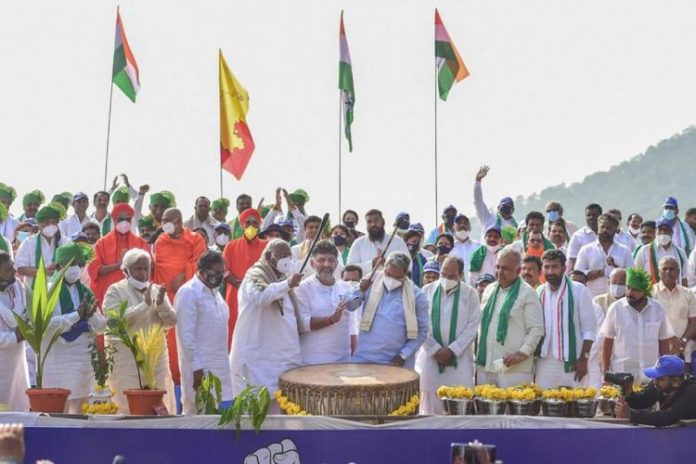 Congress workers were eagerly participating in the 90 km padayatra from Mekedatu to Bengaluru and this showed their interest in the project, said former Karnataka CM Siddaramaiah

Leader of the Opposition in the Karnataka Assembly, Siddaramaiah, has accused the ruling BJP of sacrificing the interests of the state to strengthen its position in neighbouring Tamil Nadu by not implementing the Mekedatu project.

Karnataka and Tamil Nadu (TN) have been engaged in a face-off over the ₹9,000-crore Mekedatu reservoir project, which the former is bent on constructing across the Cauvery river to solve the water woes of its capital Bengaluru. But TN is totally opposed to the project unwilling to become dependent on Karnataka to release the Cauvery water from Mekedatu, the last point from which the Cauvery freely flows downstream into their state.

On Tuesday (January 11), Siddaramaiah, who had joined the Congress padayatra on the third day, said that the ruling BJP is not going ahead with the project just to make its roots stronger in TN.

He charged the BJP with betraying the people of Karnataka for political gains. The padyatra, organised by the Congress party in the state to demand the speedy implementation of the Mekedatu project, is to prevent the BJP from using Mekedatu to politically further their interests in Tamil Nadu. The Congress was the only party that had the state’s interest at heart, he reiterated, according to news reports.

Siddaramaiah also called home minister Araga Jnanendra’s warning that the Congress will be responsible for the spurt in COVID-9 cases as “irresponsible”. Pointing out that the previous lockdowns had pushed the common man to the brink, he wanted the government to release compensation to organised and unorganised workers before they announce a lockdown.

Further, he said that they were not scared of FIRs. The BJP cannot threaten us by lodging cases, he added and asked why there were no cases against Union Ministers of State Shobha Karandlaje, Bhagavanth Khooba? They had also taken part in public functions and rallies, he said.

The BJP in Karnataka had failed to implement the project during their reign in the state between 2008 and 2013. When Congress assumed power in May 2013, with the intention of starting the project by September, they had prepared a DPR and presented it before the Cauvery Water Tribunal. But the BJP government at the Centre had blocked their attempts to take up the project, he alleged.

Today, however, the BJP is ruling at the centre and in the state as well. And 25 MPS from the state have been elected so why has the dam project not been implemented, he questioned.

Party workers from 11 assembly constituencies had flocked to Kanakapura city to participate in the padayatra, he said, adding that party workers from Hassan, Mandya, Tumakuru, Chikkaballapur and Kolar too are expected to join the march. According to Siddaramaiah, people are voluntarily coming forward to participate in the padayatra and this showed their interest in the Mekedatu project.

The success of the padayatra, however, was causing sleepless nights for state Chief Minister Bommai who is trying to scuttle the padayatra at all costs, he added.e ruling BJ