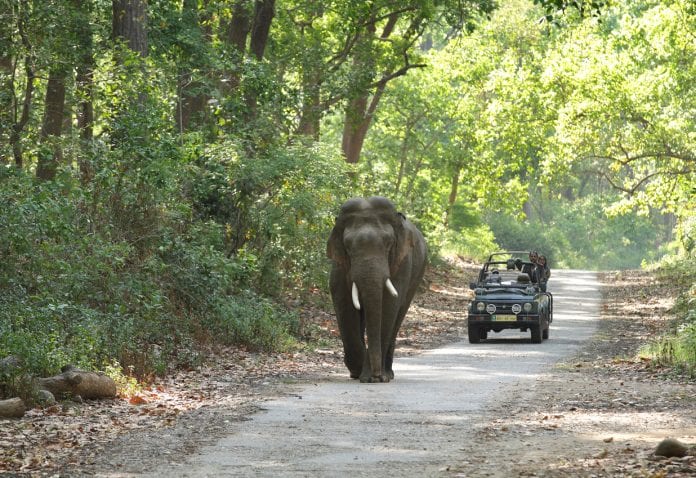 Following the imposition of the nationwide lockdown due to coronavirus outbreak and little to no traffic in various parts of the country, experts and locals residing around the Corbett National Park in Uttarakhand said that there has been a significant reduction in man-elephant conflict.

Wildlife experts opined that elephants are now able to cross otherwise-busy roads and animal corridors without being hit by vehicles.

“What we have seen so far since the imposition of lockdown is that man-elephant conflict, especially that used to happen due to traffic has reduced a lot. Villagers now tell us that they don’t even realise when an elephant passes through a corridor without any disturbance to human settlements,” wildlife expert A.G. Ansari, who resides near the national park, told Hindustan Times.

He said that a decline in human presence in the restricted areas and nearby animal corridors had visibly reduced man-elephant conflict.

“Earlier while an elephant would cross through a corridor, there would be heavy traffic with some people trying to come close to the animal, which would irritate it and eventually lead to conflict; that has significantly reduced now and we can see behavioural changes in them,” said Ansari, adding that behavioural changes were noticed in elephants amid the lockdown.

According to the state’s chief conservator of forests for the western circle, Parag Madhukar Dhakate, reduced human behaviour has also contributed to reduced conflict.

“Due to reduced anthropological pressures, elephants are moving freely without any disturbance which is why they are also not disturbing humans. We are also continuously monitoring the whole landscape to see for changes in the behaviour of animals in pre and post-lockdown period,” Dhakate told HT.

He said that cameras set up by the forest department officials at various places on the national highway, which passes through the Corbett National Park to collect data and research the rise and fall in number of cases pre- and post-lockdown, are also helping the officials to keep a look out for any anti-social elements entering into the vicinity.

“Along with continuously monitoring the health status of animals, like any animal being injured which gets captured in the cameras, they also act as a psychological deterrent for anti-social elements who might try to enter the forests despite the lockdown for illegal activities,” added Dhakate.

Several incidents of wild elephants attacking humans and food-laden vehicles were reported from the Corbett landscape which has over 1,400 of these mammals.

In November last year, a 52-year-old man was stomped to death by a wild elephant after he was pulled out of a bus near Corbett Tiger Reserve in Mandal forest range in Nainital district.

Another such incident of these mammals attacking vehicles with food items led to the forest department barring the entry of such automobiles on the 25-km road stretch in Ramnagar area near the Corbett Tiger Reserve, a path the elephants have to regularly cross to reach the Kosi river.